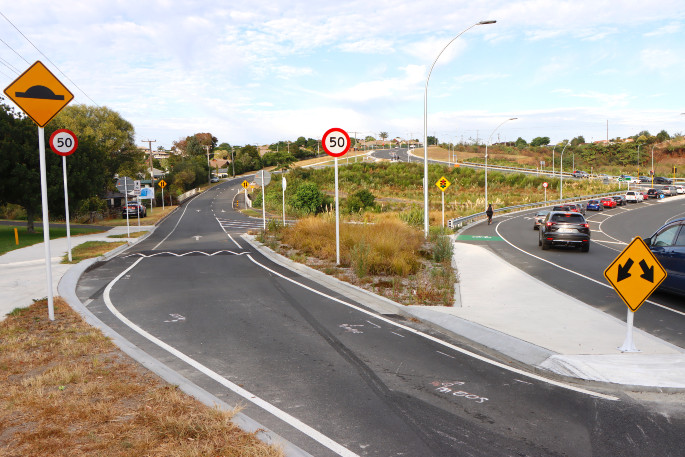 ‘I consider it a waste of money.’

That’s Vicki Coes’ reaction to the Welcome Bay slip lane and the recent redesign work done by the Tauranga City Council and the NZTA.

“I consider it a waste of money because the majority of motorists in Welcome Bay wanted the lane re-opened to reduce congestion on Welcome Bay Road. In the mornings if it had been re-opened without their ‘safety measures’ it would have reduced congestion and traffic towards Greerton would have used it,” she says.

“The safety of our travelling public by whatever means they choose is our highest priority. The site was independently assessed and it was determined that Welcome Bay Lane should not reopen without safety measures being introduced.”

Martin says it is too early to say if there has been a reduction in traffic congestion since the lane reopened because it has only been open for a few months and most of that time was during the school holidays. He says data can be provided towards the end of April which will reflect normal network performance in this area.

Vicki says she, along with virtually all of the other traffic, continues towards the traffic lights when headed towards Greerton, as she says it is faster and easier to access.

“Is it ironic there is a cycle lane on the highway below the underpass heading into Welcome Bay, which cannot be accessed by cyclists other than them crossing the highway lanes?”

Martin says the improvements were specifically designed for the safety of cyclists travelling through the area.

“The measures installed include the narrowing of Welcome Bay Lane and the introduction of a speed cushion, a traffic island on Welcome Bay Road, new signage and road markings. The design recognises that confident cyclists will probably choose to stay on the road however cyclists do have two options to get across the Welcome Bay Lane intersection, including diverting left along Welcome Bay Lane to a new off-road crossing location or staying on the marked cycle lane.”

Martin says the council sees these changes as a positive thing as a result of concerns from the community.

“We have lodged two pieces of feedback via our contact centre. They were related to traffic concerns: one person shared concerns about heavy vehicles turning left and the other was regarding cyclists’ safety.

“Additionally, we received one email from a member of the public who was involved in an incident involving a car and cyclist; the motorist cut across the front of a cyclist and clipped their front wheel.

“Fortunately, no injuries were sustained, but the incident left the cyclist shocked.

“We have installed a CCTV camera to monitor the situation. This is the only incident that we are aware of since the Welcome Bay Lane was reopened.

No looking and way too fast

dumbkof2 - the reason they made it a sharp left is because people used it as a F1 pit lane, on the entrance and exit.

Well said vicki, totally agree with your comment, they make a lot of common sense. I always thought that the initial layout was much safer than it is now, merge onto the slipway and merge off the other side.. I’m absolutely disgusted with TCC comments and the fact that this amount of ratepayers money was spent unnecessarily (IMHO) . TCC need to actualy listen to the ratepayers of tauranga and get this right the first time, and not failing on a retest. And don’t get me started on the idiot who program managed the greerton debacle. #getridofthetrtafficlights.

Martin says Martin says 5 times in this story,agree with Vicki, it is a waste Martin says this and that,there was nothing wrong with it from the begining, $27,000 for redesign work, my gosh, and all that concrete, TCC DONT CARE,another waste of money, TCC had a drill rig down at BMX track drilling down to see how much rubbish was there,NOW THATS A WASTE, its been closed for years now, is someone getting a BACKHAND and has a finger in pie with this (CONFLICT OF INTEREST) IMMMM,2 PENNIES WORTH, 10-4 OUT, THANKS SUNLIVE, PHEW.

I don’t use it now. I did when they original designed it. It worked brilliantly. Traffic build up was minimal to what it used to be. But to make the cyclists safe they redesigned it (which is fair enough). Unfortunately it means you have to give way at the top. Its a slower way to go now. I use the lights to go to Greerton. Oh and by the way I have yet to see a cyclist use it. They also use the lights. So yes the redesign is a waste because the traffic this week is building up past my place in the mornings-Again.

No two ways about it. The changes are ridiculous and an obvious waste of money. you can find examples of the council roading "plan" failing everywhere you look. I’m waiting for the announcement of changes required to 15th Ave next...I wonder why rates keep going up...hmmmm. I think it’s about time we give council and govt for that matter a huge downsizing.

Just like Greerton the thinking around safety is flawed by the council, just look at the mess caused there, council should be more concerned with traffic flow.

Using the slip lane, you are penalised giving way to traffic that didnt take the slip lane. Used once, never again. Also before new road all traffic travelled past Greenwood Park, no problem, install slip lane, problem?? The city side of the under pass, cyclist have to cross traffic lanes, a more precarious situation. Cyclist heading to Maungatapu from the city have no designated lane either. Add to lists of stuff ups.

can someone please tell me why they put in a sharp right turn instead of carrying on up the hill to a merging lane. seem to me even a kindergarten child could have designed it better than this