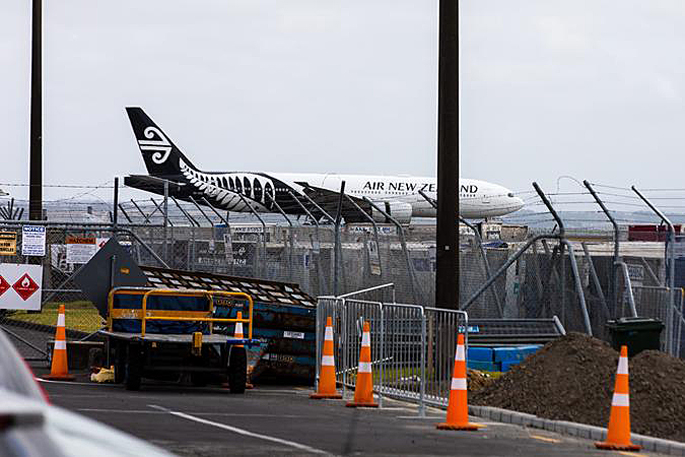 The Air New Zealand flight chartered by the government to evacuate people from Wuhan during the coronavirus outbreak arrives in Auckland. Photo: RNZ / Dan Cook.

As dozens of evacuees flown from China start their 14-day coronavirus quarantine at Whangaparāoa, others who are still there are calling on the government to include residents in any future evacuation plans.

Nearly 160 people were flown out from Wuhan to Auckland on Wednesday.

Auckland woman Selina Huang was one of those who had registered to come back to New Zealand and decided not to go eventually.

She took her six-year-old daughter to Wuhan to visit her parents for the Chinese Lunar New Year.

Selina was one of the first people who told RNZ that they wanted the government to help them evacuate, but later changed her mind.

"I've applied for the evacuation and I've also registered. By then, I was thinking it was so hard for a young child to stay at home for such a long time. You know, it's very hard for her."

Selina says she had got all the travel permits she needed to get to Wuhan airport and was trying to persuade her young daughter until the last minute.

"I told her that we should wear masks all the way and she said 'it was too long that I can't do it'. She knows how long it takes on the road because we just flew back. I told her that you probably should also wear gloves, but she doesn't want to do that."

Selina says she heard about cases when evacuees from other countries were infected with the coronavirus so she didn't want to risk it. Now they'll just wait for things to get better in Wuhan.

Sophie Zeng, a New Zealand citizen working in Australia, was worrying about her elderly father in Wuhan who went there in January to visit his mother.

As a permanent resident of New Zealand, and having no immediate family member who is a citizen to travel with, her father was not eligible to be evacuated.

"I'm just wondering whether the government can have another departure plan and also decision can be made case-by-case because this would be a humanity support, which we need at this difficult time. My father is 70 years old and he is by himself," she says.

Sophie says even if there's not another evacuation plan including residents, she would like the government to advise how her father would be able to leave.

Auckland man Jacky Zeng, no relation to Sophie Zeng, said he couldn't be evacuated because he is a permanent resident.

He says on the other hand, he would rather stay put rather than causing any trouble to others.

"I have to stay in quarantine for 14 days after I go back. Then I'd rather stay at home in Wuhan and wait for the situation to get better. Secondly, I was renting. Even if I passed the 14 days quarantine, I imagine people would still feel wary having me around. I also have a shop and I have to deal with customers, so it's not very convenient."

Jacky says there needs to be more plans in place to help those who need to quarantine themselves, because it's difficult to find a suitable place and it can be costly.

"It would be good if the government can provide a place that people can stay safely for two weeks. For example, even if Wuhan is not in lockdown anymore, shall I go back or not? This is a tricky decision to make. Because I don't belong to the official evacuation group, I have to sort out quarantine myself. Then where can I go for the quarantine?"

A Ministry of Foreign Affairs and Trade spokesperson says a majority of the people who registered for the flight but did not arrive at the airport are New Zealand, Australian and Chinese passport holders.

"Consular staff will remain in contact with New Zealanders who remain in Hubei working on the best way we can assist them. Our Embassy and Consulates in mainland China remain open and are continuing to provide consular services to New Zealanders in China."

The ministry also asks people to register on SafeTravel so they can receive the lastest information and advise.

The Ministry of Health asks all travellers arriving in New Zealand after February 2 out of mainland China or have had exposure to a confirmed case of novel coronavirus to self-isolate for 14 days.