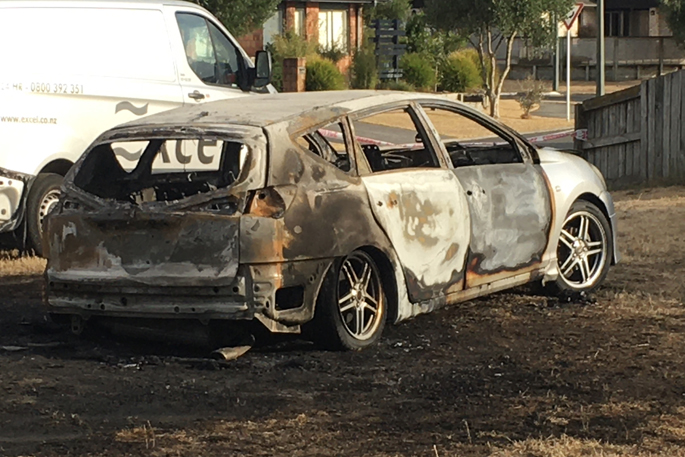 The remains of a car fire in Papamoa east over the Auckland Anniversary weekend. Photo: Supplied

A spate of crime in Papamoa East has raised alarm bells about security within the community.

A vehicle theft, a suspicious car fire and multiple accounts of vandalism that took place over the Auckland Anniversary Weekend has left affected residents in shock.

One Papamoa resident, who asked to remain anonymous, says he woke up early Monday morning to his daughter’s car on fire.

“We woke to an explosion, and we went outside and my daughter’s car was completely on fire.

“I and many of my neighbours were just watching the car blow-up."

He says the fire was “pretty damn serious”, and caused quite a stir in the residential community.

Sergeant Tristan Murray says police continue to make enquiries following the "suspicious" car fire on Eloise Court that was reported to police at on January 27 at 3.10am.

Fire and Emergency New Zealand northern communications shift manager Daniel Nicholson says someone attempted to set another vehicle on fire in the same street, but were unsuccessful.

As well as the arsons, police received reports of a ute being broken into on Wairakei Ave, Papamoa East at around the same time as the car fire.

Tristan says several cars in the area were also vandalised with spray paint that morning.

"There is a fairly good indication that they will be linked.

"A small group of people operating in that area could have created that little bit of carnage, and we are following strong lines on inquiry.”

Addressing concerns of increased crime in Papamoa, Tristan describes this series of events as an “anomaly”.

“It’s not a normal occurrence for Papamoa, but it certainly was a bad weekend.”

Theft from vehicles in Papamoa has reduced 11 per cent in the last year, according to police.

“This is due to targeting and patrolling the Papamoa area. The other reason can likely be attributed to the messaging from NZ Police and our partners NBHS and Community Patrols NZ around not leaving valuables or tools in vehicles,” says Tristan.

Police encourage anyone with information that may assist these investigations to call 105.

Wasn’t it only a couple of months ago that a police vehicle was set alight in their own carpark. What about that nice freedom camping couple being terrorised by a guy on p just a fortnight ago at Harrison’s cut, demanding fuel and a lighter off them and then demanding p from them (which of course they didn’t have), they had to flee for their own safety.