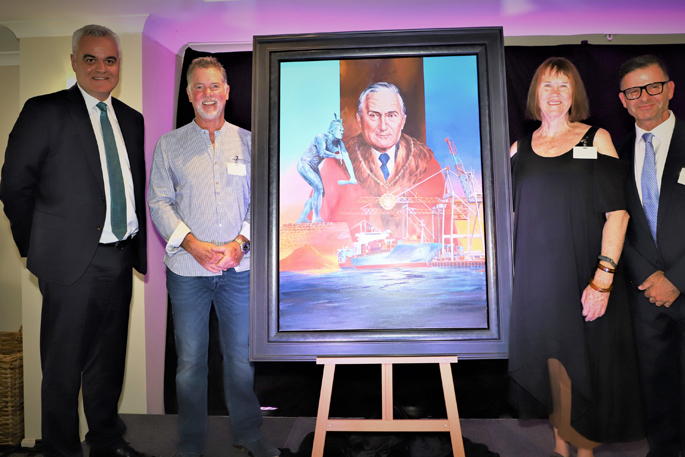 A new portrait of former Mayor of Tauranga Sir Bob Owens has been unveiled at the Ryman Healthcare retirement village in Bethlehem bearing his name.

Ryman chief executive officer Gordon MacLeod unveiled the painting with the help of the artist, Craig Primrose QSM in front 300 residents from the village.

The painting depicts in Sir Bob in his mayoral cloak and chain, floating above a scene showing the Māori god Tangaroa, in reference to the statue Sir Bob gifted to the people of the city to celebrate the centennial of the Ports of Tauranga.

The painting also shows the port’s cranes and container ships, and a sun-kissed Mt Maunganui.

“It’s fantastic. I love the way Tangaroa is there with Dad, around the mountain, says Robin.

Robin, whose mother Joy Owens spent her final years in the care centre at the village, says the likeness of Sir Bob was ‘very much like Dad.’

“And the colour blue, that was his company’s colours, it was on all the trucks. And he always wore a lot of blue ties. He would definitely have approved of it,” she says.

Before the big reveal, Gordon explained the process that led to Sir Bob being chosen as the village’s namesake and how Ryman strives to continually honour his great legacy in the Bay of Plenty and beyond.

“It has become tradition for Ryman Healthcare to name its villages after outstanding New Zealanders, which was the idea of our co-founder Kevin Hickman. It’s a way of celebrating our people and, as in this case, someone who has particular significance to the area who will give the village a lasting identity.

“Bob Owens has been described as the one individual most strongly associated with the midcentury development of Tauranga and particularly its port,” says Gordon.

“For many, his name is synonymous with business success, public service and the phenomenal growth of the city.”

Bob was Mayor of Tauranga for three terms from 1968-1977 and during his second term was also Mayor of Mt Maunganui, the dual role being a first in New Zealand.

He went on to be appointed Chairman of Air New Zealand in the wake of the Mt Erebus tragedy and successfully reorganised the airline, restoring morale and getting it back on track.

He was named as a Knight Companion of the New Zealand Order of Merit in 1997, two years before his death in September 1999.

“You can see why it is such an honour for us to be associated with Sir Bob Owens in the naming of this village, and that’s why we wanted to do our bit to recognise Sir Bob here today,” Gordon says.

He explains that the company had commissioned Auckland artist Craig Primrose to paint portraits of all Ryman’s village namesakes.

Craig says the painting took around nine weeks to research and complete.

“It has to be perfect, or as perfect as a human being can make it,” says Craig. “Don’t forget this is just mixing paints and applying it with a brush. A lot of work goes into each painting.”

The painting will be displayed in the village reception area.