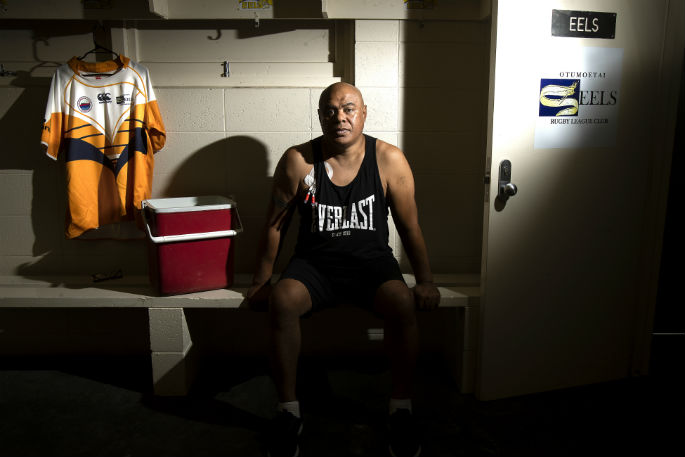 He was in a Waikato Hospital being dialysed for kidney failure when he applied for the job, a top sports job in Tauranga.

There had also been other issues – alcohol and mental health. Gus Malietoa-Brown had been in a dark place, but he insists he is in a new positive space these days.

“I didn’t hear anything about the job for a couple of months and then Bunny Nicholas banged on the front door.” And despite all those health issues, Gus Malieto-Brown, sickness beneficiary, was the new senior coach for the Otumoetai Eels Rugby League Club – Bay of Plenty’s premier league outfit.

Didn’t the club have concerns about his suitability? “I would have thought so,” laughs Gus. “But I told them the truth about what I had been through and after sitting down with the committee, they were all for it.” They liked what they saw and heard.

“He convinced us. And we have full confidence,” says Bunny Nicholas, former Eels president and now coaching and management development officer.

“We haven’t had a coach like this before, but there are many people living with dialysis. We know people like that.” Then there’s the little matter of experience. He’s never coached a rugby league, at any level. Gus Malietoa-Brown doesn’t appear to tick many boxes.

But he does have a royal lineage – both on and off the field. His grandfather was the Samoan Head of State, Malietoa Tanumafili II. “As a kid in Manurewa, South Auckland, the Samoan king would rock up to our house with the secret service to see us.”

And on the field this 180cm, 95kg centre, five eighth or lock had two seasons with the Warriors’ reserves.

“I served under people like Frank Endicott, John Monie and Wayne Bennett.”

“I watched, listened and learned from the best – how they ran their organisations, the team environment they created.” So he has a bank of knowledge and experience.

Then to Whitehaven in Cumbria for a couple of seasons. “I left Whitehaven because of off the field problems.” He means the booze. “I think I was an alcoholic at the time.” Gus Malietoa-Brown is very open about his demons, although he doesn’t touch the stuff now.  “I came back to pursue more opportunities, but every time a door opened, it closed again.”

He ended up in Middlemore Hospital for six weeks with mental health issues. “Then again in 2005 for an eight week lag in 2005. I have been very immature, running away from the world for a long time.”

Then five months ago in Australia ‘the man upstairs’ gave him the kidney failure diagnosis.

“It was a wake-up call. And Helena, my daughter in Papamoa, told me to get my arse home and start dialysing.” It’s easy to be distracted by this man’s health and wasted life, but his is also a powerful story of contrition, honesty and redemption – probably what won him the day, got him the senior coach gig.

He’s sitting in the shed at the Eels fortress – Mitchell Park’s answer to the White House Situation Room – a catheter protruding from his pectoral. It’s a portal where three times a week excess water, solutes and toxins are purged from his blood at Waikato Hospital, without which, he would be dead.

“I have reset myself and my goals. I am back, I am alive, I want this job, I want to grab it and I want to win. Yeah, watch us win.” And there’s that grin again – one which is almost too big for the face. And as Bunny Nicholas observed, he’s a likeable bugger. And he doesn’t look like an unwell man.

Fitness would be another box Gus would be hard pressed to tick. “I haven’t been for a run for 18 months.” But it’s not an impediment, just something added to his to-do list. On Friday, the 44-year-old was heading into the midday sun to do some 60m/40m shuttles. “I have all the medics telling me don’t do this or don’t do that. But I need to see how far I can push myself.” He wants to foot it with his boys.

“Gus Malietoa-Brown has been through a bit, the poor bugger,” says Bunny Nicholas. “But he has his life together again. He’s back on track.” And the players are warming to him. They relate to him. But then they have to – Bunny Nicholas reveals Gus was the only starter for the job, the only applicant for this non-paid position.

There’s one of those sporting mantras on the wall beside the showers at Mitchell Park. It goes something like “when you do your best you are a winner. When you haven’t done your best and you lose, it’s only temporary. The finish is also a starting line. So just begin again.”

Gus Malietoa-Brown could have written that himself. He’s back on the starting line.