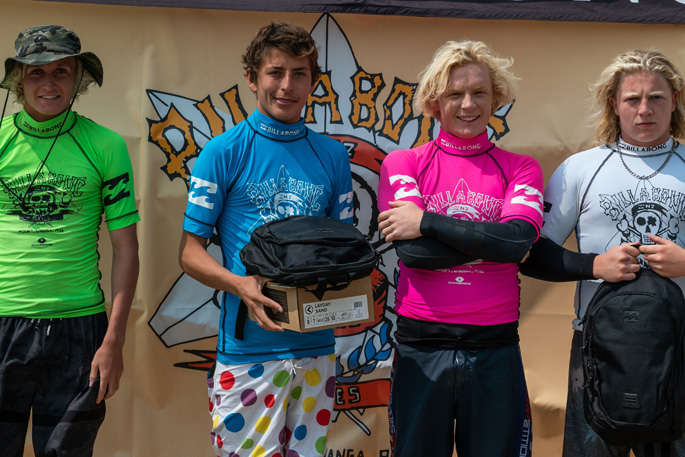 Whakatane surfer Luis Southerwood has claimed his maiden victory at a national level after winning the first event of the Billabong Grom Series held this weekend.

Tay Street in Mount Maunganui maintained just enough swell to complete the event on Sunday with 0.5 metre waves pushing the small-wave limits of Luis and his opponents in the final.

Up against a star-studded line-up, Luis surfed to a 9.4 point heat total to take the win.

“I am so happy, unfortunately, the waves weren’t there but it was such a sick final with all the boys and it was so nerve-racking the whole time, says Luis.

In the final two minutes, eventual runner up Tom Butland (Tara) found his way on to a nice wave which gave him the chance to win but he fell just short of the required 5.5 point ride, much to Luis’  delight.

“I was scared but I knew with that wave Tom got was a little smaller but any single wave someone caught out there today scared the living daylights out of me.”

It has been a drawn-out journey for the 17-year-old Whakatane surfer who talked about only ever making one heat when he started competing in the Under 14s.
Then he made one final during his time in the Under 16 Boys Division and now he has gone on to win his first Billabong Grom Series event which he shared with good friend Jack Lee who finished third today.

Tom held on for the runner up finish with Jack in third and Muriwai surfer Taylor O’Leary making back-to-back finals finishing fourth.

Georgia Wederell (Mnt) won the Under 18 Girls Division in a head-to-head battle with Estella Hungerford (Chch).

Georgia got the upper hand surfing to a 7.44 point heat total out of 20 compared with Estella’s  5.8 points.

Combined with her runner-up finish at the National Championships, the Mount Maunganui surfer now leads the rankings going into the third event of the year at Whangamata this weekend.

Amarnie Barber (Aus) won the Under 16 Girls Division in a tight final with just over a point separating the four finalists. Natasha Gouldsbury (Tara) finished 0.07 behind Amarnie in second place, getting the jump on Liv Haysom (Piha) in third and local surfer Anna Brock in fourth.

Raglan’s Kora Cooper went one better than that National Championships to take a win in the Under 16 Boys Division defeating good friend Jayden Willoughby by just over a point. Whangarei surfer Te Kauwhata Kauwhata finished in third in his first finals appearance at this level while Raglan’s third finalists, Navryn Malone, finished in fourth.

The Under 14 Divisions were won by Tao Mouldey (Mnt) and Leia Millar (Piha). For Tao, it was a step up from his runner up finish at the National Championships and he takes the lead on the New Zealand Grom Series. It was Millar’s first event of the year and she will head into the Whangamata event with a boost of confidence looking to climb the rankings further as the year progresses.