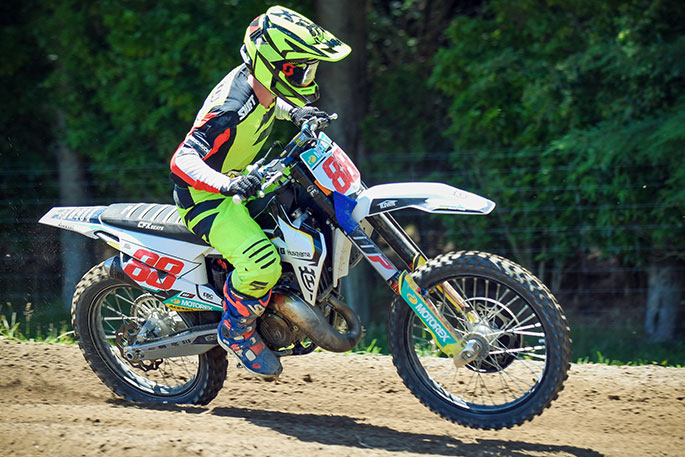 Tauranga's Brodie Connolly (Husqvarna TC125), untouchable at the opening round of the New Zealand Motocross Championships at the weekend. Photo by Andy McGechan, BikesportNZ.com

Even after just one round of the motocross nationals, the writing is already on the wall for rivals of Bay of Plenty teenager Brodie Connolly.

The 16-year-old from Tauranga was simply unstoppable at the 59th annual New Zealand Motocross Grand Prix at Woodville a week ago, unbeaten in every race he started, and the winning streak continued at the weekend when he scored an impressive hat-trick of wins at the first round of four in the 2020 New Zealand Motocross Championships in Balclutha.

The venue, at Riverside Reserve in Glasgow Street, Balclutha, had never before been used for an event of this magnitude, and it was perhaps only a handful of South Island riders who might consider they had any local knowledge advantage over Husqvarna star Connolly.

The other 125cc class riders would probably have had to be nuclear-powered and for Connolly to ride blindfolded if his winning trend was going to be upset, as Connolly took his Husqvarna TC125 to qualify nearly two seconds a lap quicker than the second best 125cc class qualifier, Aucklander Cobie Bourke.

The racing that then followed was nothing short of a demolition job.

In race one, Connolly beat Tauranga's Madoc Dixon to the chequered flag by a whopping 45-second margin. He repeating the "spanking" in race two, this time besting runner-up Dixon by 58 seconds.

Again it was Dixon giving chase in race three and again it was an easy win for Connolly as he won that race by 54 seconds.

Connolly leaves the South Island with a nine-point advantage over Dixon, the riders now heading to Rotorua for round two in just two weeks' time, on February 23.

Round three is set for Hawke's Bay on March 1, with the fourth and final round in Taupo on March 15.

Meanwhile, Bay of Plenty riders also ruled in the other two championship classes.

The only Balclutha rider at the event, Madison Latta (Husqvarna FC250F), was competing well in the MX2 class early on, but suffered a setback when he crashed spectacularly in his first race.

However, Latta quickly recovered and finished the race 16th out of the 30 riders in the class.

Race two was no better for Latta as he ran into the back of another rider at the first corner and hit the dirt again.

Again he put in a courageous charge and with his father, former Otago rugby captain Dave Latta, spurring him on from the sidelines, he clawed his way back to finish 12th.

He again finished 12th in the third and final MX2 race of the day, good enough for him to settle into 15th overall for the championships with three rounds still to come.