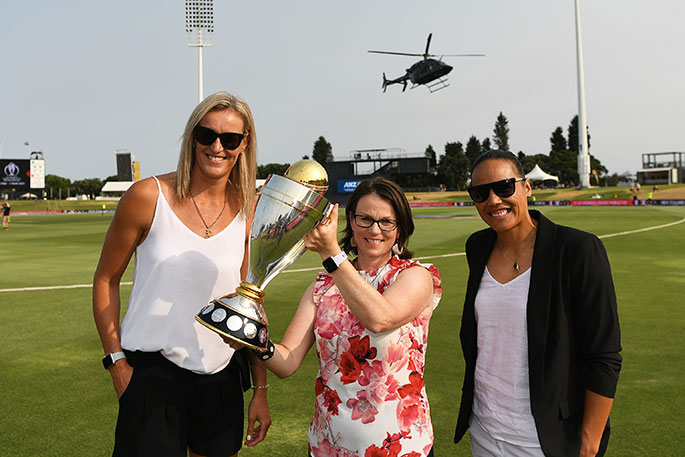 Tauranga’s Bay Oval in New Zealand rolled out the welcome carpet for three of the country’s top sporting heroes during the WHITE FERNS clash against South Africa on Sunday.

Last week, the beautiful Bay Oval in Tauranga was announced as one of six venues that will play host to the ICC Women’s Cricket World Cup in 2021, including a semi-final and some exciting pool matches to be announced in March.

With the World Cup trophy in hand, 2000 Cricket World Cup winning captain, Emily Drumm made a grand entrance as she was flown into the ground, joined by fellow World Cup winners, Leana de Bruin and Honey Hireme-Smiler, during the innings break.

Twenty years on from Drumm’s historic 2000 win in Lincoln, she was full of excitement about the ICC Women’s Cricket World Cup returning to home soil next year, and recalls what she remembers as the “greatest day ever”.

“World Cups are the pinnacle in any sport, I’m sure Leana and Honey will agree with me," says  Drumm.

“The competition goes up a level and knowing you have the best cricketers in your nation standing next to you on the pitch is the best feeling. I know Sophie (current WHITE FERNS captain) and her team will be extremely excited about playing on home soil, too."

In support of the ICC Women’s Cricket World Cup coming to Tauranga next year the World Cup winning trio banded together in solidarity of women’s sporting success on the global stage. The trio boast five World Cup titles between them.

Multi-code international Honey Hireme-Smiler is no stranger to World Cups having won three of the five she’s played in during her 20-plus year career. As well as her most recent Nines World Cup win over the Australian Jillaroos last year, the Kiwi Ferns captain has also lifted the Rugby League World Cup twice in 2000 and 2003.

“Supporting women’s sport is an opportunity I’ll never pass up. Particularly when it comes to playing in World Cups; it’s what every player dreams of regardless of what sport you play.

“It’ll be a big occasion when the WHITE FERNS come to Tauranga for the World Cup next year and I bet the city will turn on some great weather for the teams and spectators who will get amongst it here at Bay Oval,” she says.

The 2021 tournament will see eight nations play in 31 matches across 30 days throughout New Zealand between February 6 and March 7.

For the first time, sports fans around the world will be able to watch all ICC Women’s Cricket World Cup ODI games live.

“Rewind the clock a couple of decades and many women’s sports didn’t have that luxury so it’s great to see just how far we’ve come for our female athletes.”