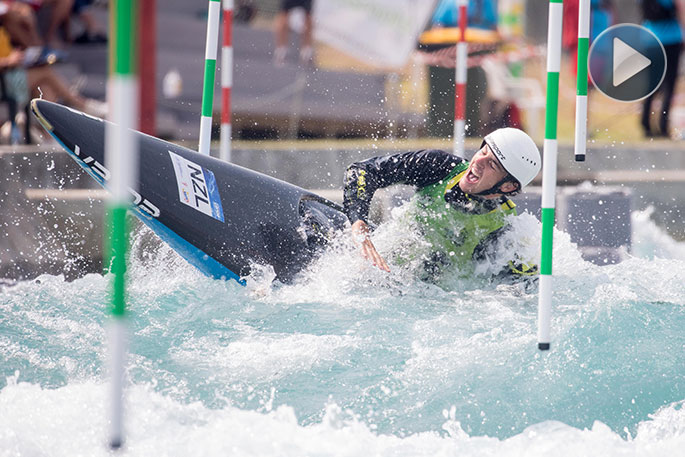 New Zealand's Jack Egan loses grip on his paddle and so too his Olympic ambitions in the men's C1 final at the Oceania canoe slalom championships in Auckland today. Photo by Jamie Troughton/Dscribe Media

Jess Fox just held off a rampaging Luuka Jones at the Oceania canoe slalom championships in Auckland yesterday, while the Australian C1 men heaped further misery on the hosts as the Olympic quota spot was decided.

Tauranga teenager Jack Egan held New Zealand's slim C1 hopes in his hands as the only Kiwi to qualify for Sunday's final.

Having only just turned 18 in November, Jack was the sixth-fastest after the semifinals and needed to beat six Australian paddlers in the final to claim the Oceania continental spot for Tokyo.

After a promising start, Jack struck disaster just after the 16th gate on a blustery Vector Wero Whitewater Park course, when his hand slipped off the paddle and he rolled into a pocket. He missed gate 17 and picked up a flurry of touches to finish 10th.

"I was having a good run and the wind was mostly in my favour but I just got caught out trying to switch from right to left and it was quite costly," says Jack.

"The wind suddenly picked up and it was hard work trying to predict where the gates were going to be but it was still an amazing feeling being in this final, seeing that the hard work has been paying off. This is a stepping stone for me and it was good to be able to give the Australians some competition."

Tasmanian Daniel Watkins picked up the Oceania title with a clean 101.57sec run, finishing just 1.77secs ahead of Zach Lokken (United States) and 4.55secs ahead of another Australian, Ian Borrows. Daniel saw Jack's misfortune as he was warming up and was reasonably confident the Australian spot in Tokyo was in the bag.

"With only one young New Zealander and six of us Aussies, I thought it would be pretty likely we'd get the spot so I kept the same race plan and attacked pretty hard," says Daniel. "I was definitely more nervous than I would normally be at an Oceania champs - there was a lot on the line in the final. There was a lot of pressure but I'm really happy with the outcome."

Jess Fox, who has more world championship titles than any other paddler in history, only qualified third-fastest in the K1 women's final, behind Jones and France's Camille Prigent. But the 25-year-old tore more than 6secs off her qualifying time in the final, posting a faultless 102.14secs.

Luuka Jones, last off, pushed all the way and was on track for an impressive upset but mistimed a stroke on the bottom drop and that was all it took to relegate her to second, just 0.49secs behind Jess but more than 4secs clear of third-placed Camille.

"I watched Jess's run from the top and knew it was 2secs faster than my semi time - I quite like the feeling of having to step up and put something good down," says Luuka 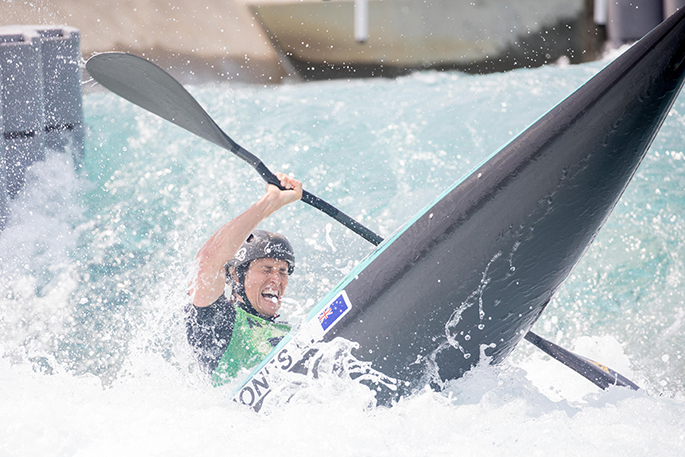 For her part, Jess relished the chance to cross the Tasman and compete against the flying Kiwi, with the pair set to do battle again in tomorrow's C1 final.

"The course is really technical and there are a lot of move throughout the whole course so you got to really be positioning well and then attack it when you can and with the wind on top of that, it quite a challenge," says Jess.

As well as today's C1 women's semifinals and final, the men's K1 crown will be decided, with Olympic selection spots also up for grabs for both Australian and New Zealand men.

Entry is again free for spectators at the Manukau-based venue.