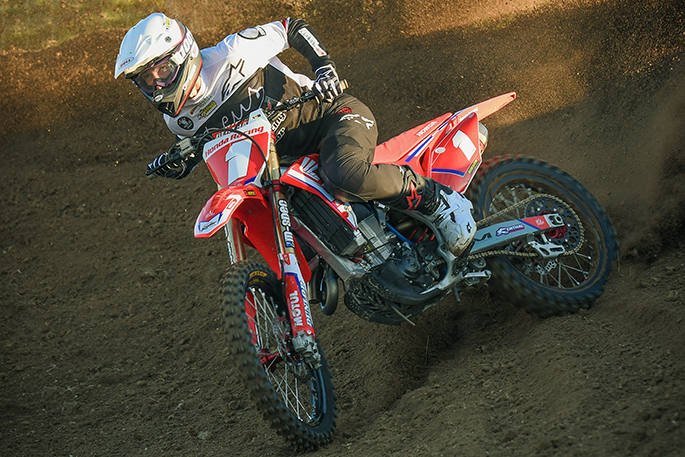 Mount Maunganui's Cody Cooper (Honda CRF450), on target to defend his national MX1 crown. Photo: Andy McGechan, BikesportNZ.com
"Never underestimate me!"
Those were the words of warning from the mouth of Bay of Plenty's Cody Cooper after he completely dominated the day at round one of the 2020 New Zealand Motocross Championships at Balclutha on Saturday.
Wise words indeed ... after all, he’s got the No.1 emblazoned on the front and sides of his bright red Honda CRF450 bike for a reason ... he’s currently the best MX1 motocross racer in the country and has been for many years.
He suffered a freak training crash a month ago and was obviously still struggling with his neck injury when he raced at the Honda New Zealand Motocross Grand Prix at Woodville a week ago, finishing that weekend an unaccustomed fourth overall in the MX1 class and giving rise to speculation that he might be unable to defend his crown.
But there was no evidence of his hurting at Balclutha. In fact, it was Mount Maunganui's Cooper "putting the hurt" on his rivals in south Otago on Saturday.
The 36-year-old Cooper is chasing his eighth national title in the premier grade and his hat-trick of wins in the MX1 class at Balclutha certainly silenced any doubters, his maximum points haul giving him a solid 11 points advantage over visiting Australian professional Kirk Gibbs, with the Woodville winner, Auckland's Hamish Harwood, third overall for the weekend, an additional two points further back.
Cooper comfortably won both the first two MX1 races at Balclutha, but he had to work harder in the third and final outing, with Harwood closing in on him late in the race.
"I didn't have much left in the tank by the third race," Cooper explained.
"But I knew the other riders would find it hard to pass if they caught me anyway. I just clicked off the laps and, in the end, I managed to pull away again.
"With what I've been through this past month and only short periods training on the bike, perhaps only four times on the bike since my crash, my fitness has been going backwards.
"I managed to get great starts today and that certainly helped. My neck feels fatigued, the muscles tired, but I have two weeks now before the next round and so I'm looking forward to being even better for that event.
"We found some really good suspension settings during the week and we just transferred the shock absorber off my practice bike and onto my race bike for Balclutha. That seemed to work really well.
"This has been a good start to my title defence. I didn't really expect to go so well," he concluded.
Dunedin's Sam Cuthbertson (Honda CRF450) impressed at Balclutha on Saturday, running with the leaders in race one before his drive chain broke. That meant he scored zero points for that race, but he bounced back to finish sixth and fifth in the next two races and he is currently 11th overall in the series standings.
Taupo's Hadleigh Knight (Honda CRF450) was solid all day, finishing with a 7-9-6 score-card in the MX1 class at Balclutha, placing him sixth overall in the championship standings. The cross-country specialist, winner of the Dirt Guide Cross-country Championships series in November, could be favoured to move up in the coming weeks, with the upcoming rounds at Rotorua and Taupo among his favourite tracks.
Cooper's MX2 (250cc) class team-mate, Taupo rider Wyatt Chase, had a mixed weekend, finishing runner-up in the opening race but also suffering a non-finish later in the day. He is down in ninth overall position after round one, but confident he will be able to move up the rankings at the events that follow.
More on SunLive...
0 Comments
You must be logged in to make a comment. Login Now
There are no comments on this article.