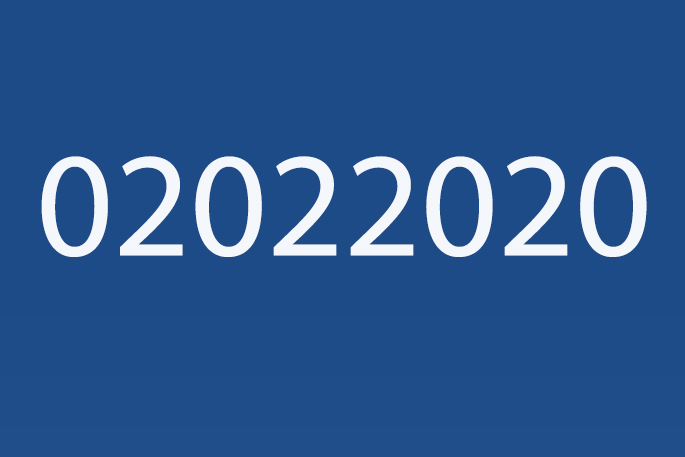 February 2, 2020 is a palindrome date, a mirror image date which happens exceptionally rarely.

Today Sunday February 2, 2020 is exciting for those of us who love numbers and palindromes. Written numerically, 02-02-2020 is a palindrome, which reads the same backward and forward.

Therefore it’s entirely logical that today at noon would be the perfect time to compose your own palindrome. If you are busy eating a sandwich - which when you think about it, is a food palindrome -  you may end up forgetting to compose one at noon, so maybe you could do something else unforgettable at 2.20pm or 2020 hours this evening.

Some of you may ask why this is logical? Well noon is halfway through the day, and the word 'noon' is of course a palindrome. Others of you may be asking how is this not logical, in which case I'd love to know - are you also a musician?

Examples of word palindromes are ‘A Toyota’s a Toyota’, ‘A Toyota! Race fast, safe car! A Toyota!’, ‘Amy, must I jujitsu my ma?’ or ‘A Santa at Nasa’.  And then there’s my favourite – ‘Acrobats stab orca’ which I tend not to repeat because of wanting to protect our marine wildlife. And I have acrobatic friends.

Palindromes are around us daily. We have mum, dad, nan, pop, sis, and all our friends named Anna, Pip, Bob, Elle, Eve, Elle, Hannah and Otto.

Some more examples to help you get started are ‘Air an aria’, ‘Are we not drawn onward to new era?’ and the longest one I’ve found yet – ‘Are we not pure? “No sir!” Panama’s moody Noriega brags. “It is garbage!” Irony dooms a man; a prisoner up to new era.’

Keeping it simple is the key for those starting off, such as ‘Avid diva’, and you can also weave in other languages such as ‘Amore, Roma.’

Another way to start writing your palindrome which munching on your sandwich or hotdog would be to choose one word such as ‘cinema’ and figure out what words appear in it backwards, and then rework them, resulting in a palindrome like ‘Amen icy cinema’.

Americans tend to list dates in order of month, then day then year as in the M-DD-YY sequence. This means that there’s a possibility of three palindrome days this year; the last Palindrome Week – which was actually ten days -   of the decade occurred last year. From September 10 (9-10-19) through to September 19 (9-19-19), the daily dates read the same forward and backward when using the M-DD-YY sequence.

As TimeAndDate.com explains: "The month in which this happens always corresponds to the last digit of the year. ... In 2012, the same sequence of dates occurred in February. In 2017, it happened in July, in 2018 in August and in 2019, it happened in September."

Avoid all this if you suffer from aibohphobia, which is defined as a fear of palindromes. Aibohphobia spelt backwards is aibohphobia in case you missed that.

Another way to celebrate a palindrome day is to go through the whole day backwards and start with a sleep followed by brushing your teeth and then enjoy an icy cold dessert. Or ‘a nut for a jar of tuna’.