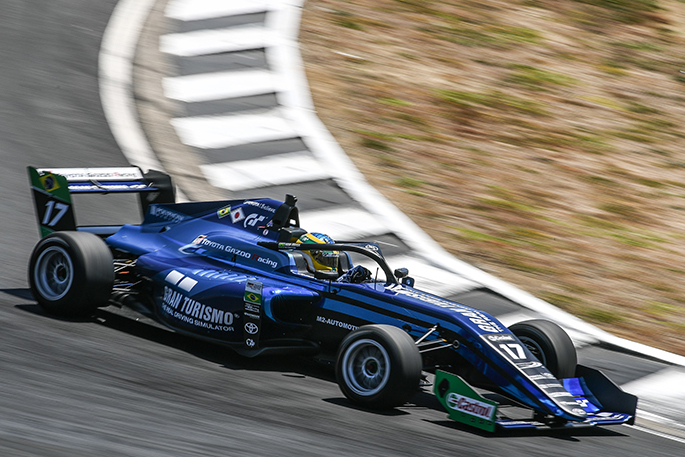 He became the fifth winner in the closely fought New Zealand series and closed the points gap to series leader and reigning champion Liam Lawson.

A Gran Turismo ambassador and e-sports champion who is mentored by former F1 racer Roberto Moreno, Fraga made a textbook getaway. He burst out from the second row of the grid to leapfrog past pole position man Petr Ptacek and a slow starting Liam Lawson. That was it for the lead of the race and it was all plain sailing once he overcame an early Safety Car to eventually win the 20 lap race by three seconds.

“It feels amazing,” he said afterwards. “It means a lot. We have been working so hard and after all the hard work, finally the goals start to feel closer. We need to keep focussed for the next races and get more strong results."

A poor start by Lawson dropped him down to fifth and he did well to maintain that position into a very tight and closely fought first corner. Fraga and Ptacek battled it out but it was Fraga who had the racing line and he went into the first turn ahead of pole position holder Ptacek in his mtec Motorsport engineered by R-Ace GP Toyota FT60.

On the rush down to Turn 2, Petersson, Kohlbecker and Denner tangled in the mid field, spinning both out and bringing out the Safety Car. Kohlbecker was able to rejoin but was carrying front wing damage. Denner headed to the pits first but had to retire, while Kohlbecker came in a lap later for a new nose and front wing. Kiwi Motorsport mechanics turned it round in just a few seconds to allow him to get back onto track without losing a lap. 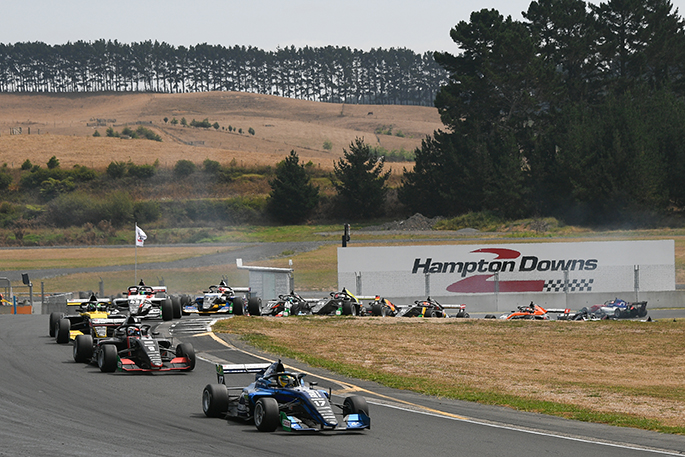 As the race progressed Fraga made good his getaway and quickly established a lead over Ptacek, who in turn had his mirrors full of the chasing pack. This was a pack that Lawson had to break through to minimise the damage from his poor start and he duly obliged with a series of great passes on Colapinto first, and then Collet before setting off after Ptacek. It took him a couple of laps to catch him, but as soon as he did he started to pile on the pressure on the Czech Republic racer.

Lawson’s first attempt just after the halfway mark in the race saw him narrowly fail to make a turn one move stick, but Ptacek’s defence had compromised his exit from the corner and Lawson; needed no invitation to attack again immediately and his clean move through the inside into turn two was a beauty and left Ptacek scrabbling for grip on the outside.

Quickly into his stride, Lawson then set off after the leader with a spirited charge, and although he initially carved a few tenths off here and there, he was sliding around on the hot track having clearly asked a lot of his tyres. In the end there was nothing he could do about Fraga, who raced him to a popular first win.

Behind the top two, Ptacek hung on for his best ever result in the championship to take the last spot on the podium. There was nothing Franco Colapinto or Caio Collet could do in their respective Kiwi Motorsport or mtec Motorsport entries other than apply hard pressure to Ptacek, but the reality was they didn’t have the pace to pass him.

Oliver Rasmussen was a lonely sixth, while Yuki Tsunoda and Jackson Walls enjoyed a spirited battle in the early stages of the race that was eventually resolved in the Japanese Red Bull Junior's favour, who had done well after starting ninth on the grid. Grégoire Saucy bagged another top ten result with ninth, while Lirim Zendeli came home tenth.

Post-race penalties pushed Lucas Petersson and Tijmen van der Helm to the back of the field, van der Helm incurring the wrath of the stewards after causing Axel Gnos to spin at the restart. Petersson’s penalty was for causing the original Kohlbecker and Denner incident at the second corner.