NZ may reach 40C in the next few days 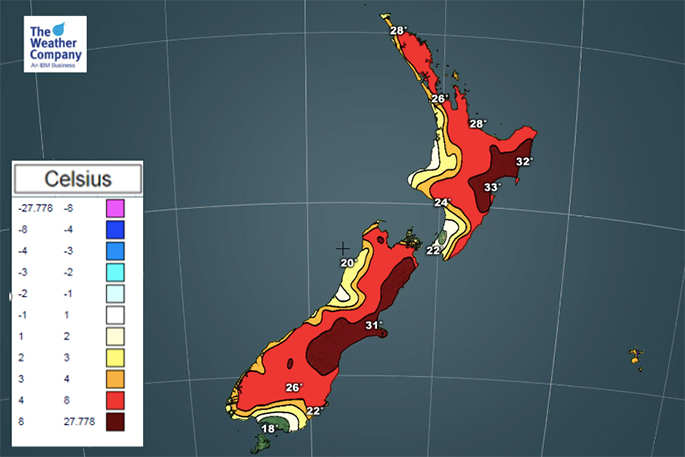 The map shows the maximum temperature departure from normal on Sunday. Graphic: WeatherWatch.co.nz

Yesterday Gisborne reached 38.2 degrees Celsius and the Australian heatwave hasn't even reached our shores yet.

There is a chance 40 degrees could be reached somewhere in the east says WeatherWatch.co.nz.

Latest reliable forecast data from WeatherWatch shows a forecast high of 37 degrees on Monday in the shade in communities around Gisborne.

"It is incredibly rare to see a forecast high like that in the North Island and there's always a few degrees wriggle room around daily highs in New Zealand so we can't rule out 40 degrees being met,” says head forecaster Philip Duncan.

"New Zealand's highest temperatures don't often occur on a calm day, it needs a nor'west flow out of Australia and with that still to arrive it boosts the chances of climbing to 40 degrees.”

Philip says certain valleys in the east can enhance the heat further, especially when timed with clear skies and peak mid to late afternoon heat.

"Under the right conditions we do have the ingredients for some isolated parts of eastern New Zealand to reach 40 degrees in the next 72 hours.”

The eastern side of the North Island was the highest candidate for reaching the rare temperature and WeatherWatch.co.nz says again Gisborne region looks to be the hottest, probably on Monday when the heat peaks over New Zealand.

On the western side of the island and towards the north, places like Auckland will get more warmth, with daytime highs possibly reaching 30 degrees inland.

Waikato is forecast to reach the low 30s in the days ahead and inland Auckland matches Waikato heat - which many people may not be aware of.

The daytime highs for Auckland are usually for the airport which is cooler by about 5 degrees due to being coastal. Add on top of that Auckland and other northern centres will have humidity between 65 and 95 per cent in the days and nights ahead, making it feel another four or five degrees warmer than it is. So yes, it will feel like the low to mid 30s at times.

The heatwave from Australia moves into the South Island today, then across the North Island and upper South Island for Sunday, Monday and Tuesday.

Monday looks to be the peak of the heat for NZ. On Tuesday a cooler change moves up the South Island and it moves into the North Island's eastern side on Wednesday and Thursday - with temperatures tumbling over 10 degrees.