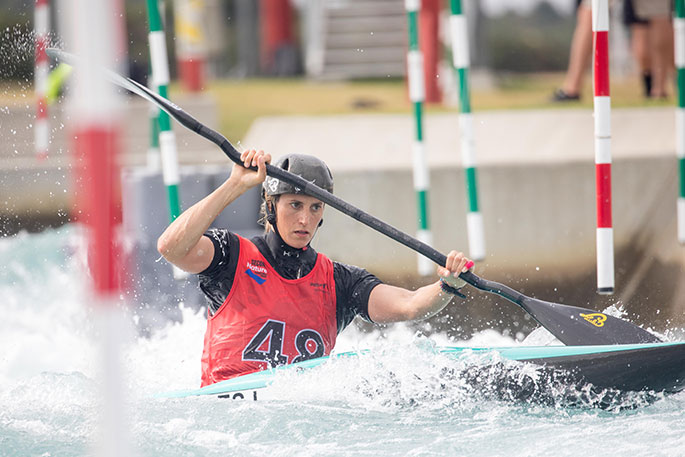 Evy Leibfarth turned up Down Under this time last year with stars in her eyes and the fresh-faced enthusiasm only a 15-year-old can bring.

The American teen shyly introduced herself to kayaking stars Jess Fox and Luuka Jones and proudly proclaimed them her idols as she watched their classy performances, on and off the water.

A year later, as she lines up at this weekend's Oceania canoe slalom championships in Auckland, the paddling prodigy will be eyeing Australia's Fox and New Zealand's Jones as near-equals after an astonishing break-out 2019 season.

She became the youngest person to win a world cup medal, picking up C1 bronze in Solvenia, and made a series of finals in both K1 and C1 across the world cup rounds and the world championships.

"My paddling took a huge jump - just being in the presence of so many top athletes and being able to watch and learn from them really helped my paddling," Leibfarth says at the Vector Wero Whitewater Park in Auckland this week.

"I was just really excited the whole year to keep training and pushing and I'm really excited for this upcoming year, starting with the Oceania championships."

She celebrated her 16th birthday on her first trip to New Zealand this week, although the Bryson City, North Carolina native met Jones and Fox at the Australian championships last year.

"Both of them have such a unique style and each does certain moves better than others and I just love to watch them and see how smooth they are in the water. Off the water, they just have such a great attitude towards the sport and they get a lot of younger kids into it and I really admire that about them." 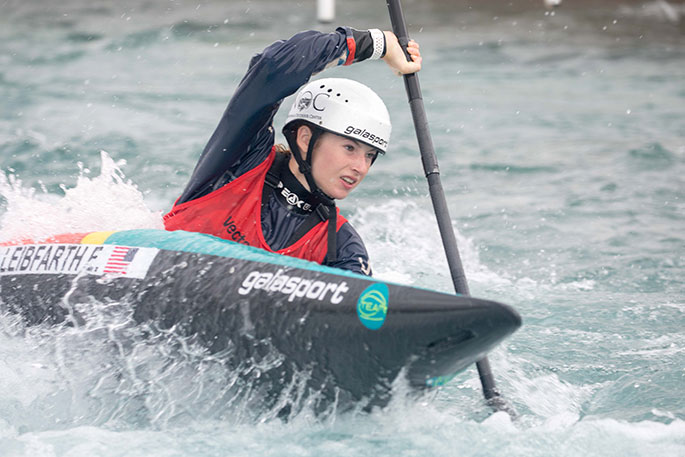 The Oceania championships double as the first Olympic qualifier for many Australian, New Zealand and Pacific Island paddlers, with the second in Australia next month. Leibfarth has her own Olympic trials in Oklahoma in April - where she's heavily favoured to book spots in both C1 and K1 - while Fox and Jones have already pre-qualified with their world championship performances and just need their selections confirmed.

Fox, who became the most successful paddler in world championship history last year, was herself a precocious teen, winning Olympic silver in the K1 in London in 2012. She predicts a big future for Leibfarth too.

"She was catapulted onto the world tour last year with some amazing performances by a 15-year-old so she's definitely one to watch," Fox says.

"She's a bubbly, exciting paddler to watch and she can put down some fast paddling. She's just really tidy and clean and gets through the gates well, she's got a lot of potential and progress to make, being so young."

This will be the fourth time Fox has competed at Vector Wero and she's also looking forward to reigniting her long rivalry with Jones, with the pair sharing podiums in some big events in recent years.

"It's great to have such awesome competition close to home - I've known Luuka for years now and she's one of the strongest paddlers in the world and on her home course, she'll be hard to beat. I think back on Rio and how special it was to share the podium with her and to have New Zealand and Australia side by side, like a sisterhood in a way. It was nice to have the Southern Hemisphere represented when it's such a European-centred sport and the growth of the sport in the Southern Hemisphere is fantastic."

For Jones, having some of the world's best paddlers come to her home course is immensely gratifying.

"It's a huge weekend having the Oceania champs in New Zealand and it's really special having so many internationals over to compete with," Jones says.

"It's such an awesome whitewater course and I feel quite proud to show them where we train. Jess is an amazing paddler - the most successful in our sport - and just to have her here to measure myself against is pretty exciting."

While selection rivalry will be particularly intense in the men's K1 - where both New Zealand and Australia have qualified boat spots for Tokyo - the men's C1 is wide open with a continental qualification still up for grabs between paddlers from Australia, New Zealand and the Cook Islands.

Entry is free for spectators across all three days, with the championships starting at 9am on Saturday.