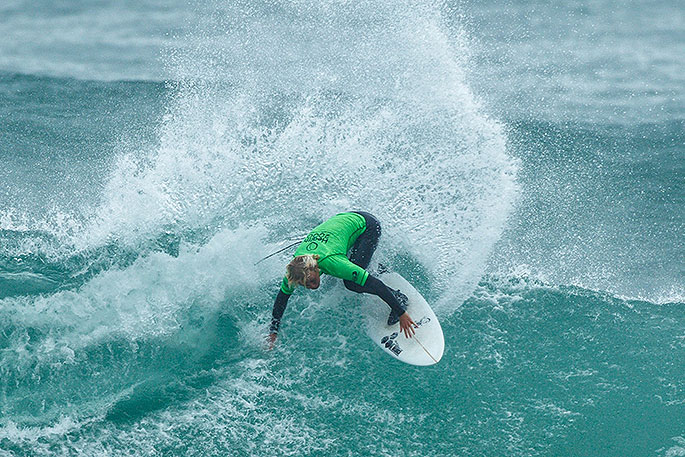 After a dormant ocean forced postponement last weekend, the 2020 Billabong Grom Series presented by Oceanbridge will kick off at Mount Maunganui this Saturday and run through the weekend.

The first of three events takes place at Tay Street with the series carrying on to Whangamata next weekend and Piha toward the end of February.

The 15th edition of the series has drawn another big field of junior surfers from around the country as they look to make the most of the summer waves before heading back to school.

Earlier this month, many of the country’s top juniors surfed in the Health 2000 National Surfing Championships held at Dunedin.

Five age-group champions from the event will be in action during the Billabong Grom Series including the winner of the Under 18 Boys Division and local Bay of Plenty surfer, Jack Lee (Whaka).

Lee was in superb form at the National Championships and after finishing runner-up in the New Zealand Grom Series in 2019, will want to go one better this year before he moves into the Open Men’s Division.

The new National Champion and Under 18 Girls Champion, Ava Henderson (Chch) will be absent from the first event of the series.

However, the likes of new Under 16 Girls Champion, Piha’s Liv Haysom will be in action aiming to continue her good form into this series.

With one event in her backyard at Piha, a good start to the season will set her up nicely.

The vast majority of surfers will contest the youngest of age groups – the Under 14s. Bay of Plenty is renowned for producing top junior talent and the field of surfers in the Under 14 Division this year is no different with the likes of Tao Mouldey and Sophia Brock leading a large pack of surfers from Mount Maunganui including Beau Woods, Tava Santorik, Tyler Stenzel and Lily Savill.

The surf is expected to be small over the weekend with less than 1.0m of swell which will fade through into Friday.

Morning offshore winds will give way to afternoon sea breezes.

Participants will enjoy a second chance format at the event this year with all surfers getting to surf twice.

They will also receive a Billabong Grom Series t-shirt upon entering the series as well as being in with a chance to receive piles of giveaways and prizes for podium-finishing surfers.

It's the 15th year that Billabong has sponsored the series in partnership with Oceanbridge who has been a proud long-time supporter of surfing in New Zealand.

The action takes place at Tay Street, Mount Maunganui from 8am until late afternoon on both Saturday and Sunday.

Please see below for the winners of the Billabong Grom Series presented by Oceanbridge in 2019.