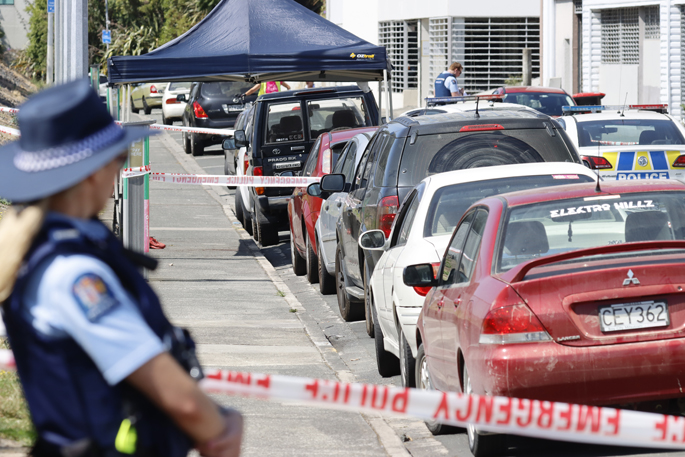 The scene of the stabbing was cordoned off on Sunday morning. Image: Daniel Hines/SunLive.

A man accused of stabbing another man in Tauranga is yet to enter a plea on any charges.

Elijah Wanoa appeared in Tauranga District Court on Tuesday charged with wounding with intent to cause grievous bodily harm.

He is jointly charged with Quentin Holt.

The 20-year-old is alleged to have stabbed a person in the early hours of Sunday morning on The Strand.

Tony told the court the 20-year-old has had no previous convictions and the victim is unknown to him.

Wanoa also suffered a stab wound to his left arm following the incident.

Tony says the defendant was stabbed on the night and went to Tauranga Hospital for treatment.

Police prosecution opposed the accused’s bail application, because it was a “particularly nasty assault” and investigations are still ongoing.

Judge Michael Crosbie says the allegations before the court are serious because someone is still in hospital with three stab wounds to their stomach, and one slash to his neck following a fight.

“In terms of the nature of the offence, I’m told the victim was attacked by two males with a knife, he was alone [and] didn’t know his attackers they’ve said, so it’s a serious offence.”

The knife used in the incident is yet to be located, says Judge Crosbie.

“At this stage, the evidence would appear sufficient to suggest that this defendant was at the very least present and involved in some way.

“Mr Balme says there is a real issue about the extent of involvement and the culpability and I accept that there may be further statements etc. that need to be assessed.

“The sergeant says there is still numerous enquiries to complete.”

Wanoa was arrested at a property on No2 Road Te Puke on Sunday evening where the Armed Offenders Squad and Police dog units attended.

The judge says he has been told by police Wanoa and Holt are allegedly prospecting for the Mongol gang.

Tony says his client has no gang connections or associations.

Judge Crosbie remanded Wanoa on bail with a 24 hour curfew until his next court appearance on February 18.

“One slip up and you’ll be in custody,” warned Judge Crosbie.

hOW SERIOUS DOES IT HAVE TO BE?

Before actions like this incident are not glossed over and bail is not in the equation !!!!