Katikati rises up over ‘horror highway’ 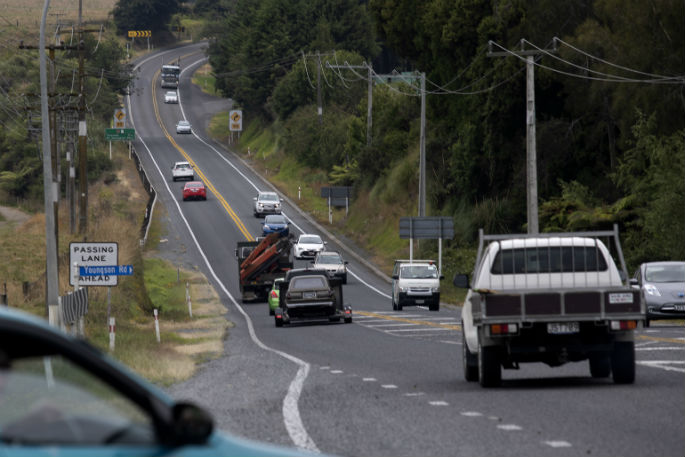 Traffic wends its way up SH2 near Katikati.

The public debate over what’s been infamously dubbed the ‘horror highway’ has been fired up again.

A petition is running in Katikati urging ‘real improvements’ to SH2 between Katikati and Tauranga.

“Obviously safety is paramount,” says Andy Earl, the Katikati man driving the petition. “But these cheese cutters they are plastering along the centre and side of the road are doing nothing to help the rapid increase in population growth.”

The petition calls on the Government to reinstate the upgrade on SH2 Tauranga to Katikati corridor to prioritise both safety and capacity, as proposed by the preceding National Government.

“Our highway is no longer fit for purpose.”

More than 1500 people agree with Andy. They have attached their signatures to the petition on the Katikati Area Road Facebook page.

It has close to 2500 members and reflects feeling in the area. “We need a highway that can deal with the amount of traffic using it,” insists one commenter on the group’s Facebook page. “Not this fix-in-bits that does nothing for safety.”

Another post says: “unacceptable NZTA – you want to live here a while.” The page offers running news on traffic conditions, snarls, accidents and weather down the notorious stretch of road.

And according to Katikati Community Board chairman, Ben Warren, the SH2 and bypass issues are contributing to the “decreasing quality of life in our town”. He says some people are getting to dislike it so much they’re moving to quieter areas.

He says it’s extremely disappointing to see all the public money squandered on reports, consultants and planning only to have funding pulled from such projects as the Tauranga Northern Link.

“Politicians worried about their own re-election instead of doing what is good for the country are completely letting the public down. The WBOP has the busiest port in New Zealand, it is the biggest horticulture hub in New Zealand and yet the reality is that the economic benefits are being eroded away by small unsafe country roads.”

In his reasoning for the petition, Andy Earl says the Labour Party replaced all the plans for local growth by stalling the previous Government’s plan for a four-lane highway between Katikati and Tauranga.

“The roading development currently implemented includes little more than median barriers and roadside railings. The intention is based solely on safety but not capacity. Our state highway is no longer fit for purpose.”

He says the project needs to stay away from “the clutches of political wrangling, party policy and new agendas”. He says the reason the project hasn’t developed in line with growth is down to three things – the government of the day, NZTA and WBDC.

And rather than a piece meal approach to safety measures he has implored the NZTA to shift focus to the more serious and dangerous parts of the highway, like the stretch between Apata and Te Puna. “I have discussed this with NZTA but it’s like negotiating with a brick wall.”

Ben Warren agrees. His wife was almost “cleaned up” on the Apata ‘S’ bend. “They have fixed the straightest part of the bloody road just outside Waihi when they should have looked at the bends.”

The former Australian police officer with experience in traffic enforcement says it would take three months to straighten the Apata ‘S’ bend. “Or impose a 50 km/h restriction until they can fix it.”

The upgrade petition remains until the end of February.

For its part NZTA has scheduled what it calls a ‘drop-in session’ at the Lighthouse Café in Lockington Road, Katikati, from 3pm on Wednesday, January 29. It wants to talk the public through some safety improvements it has planned for SH2.

Its not the road at fault.

It’s not the road at fault, it is a number of things. Its the impatient drivers or nuts behind the wheel who are either on their cellphones or not paying attention to the other traffic on the road. Time to bring the the rapid Motorbike force on Motorbikes back to catch these idiots on cellphones etc. BTW, the National Government had nearly 3 terms in office and they did stuff all to do anything about this dangerous road but just before last election they suddenly find the money to fund the rebuild which never happened anyway.

Enough is enough! I don’t want to see the accident any more. Yes, everybody must concentrate to doing safe drive, off course. BUT definitely we need a good road from Katikati(Waihi) to Tauranga. SH2 is a main road in North Island of New Zealand. Look at the road condition. Miserable！

Most comments has got it right,its drivers who causes accidents.this use to be a 100k road with fewer accidents,how many accidents is caused drug impared drivers and using phones.I dont use this road as much as I use to and alway see someone on the phone,slow drivers are another cause for accidents,forcing frustrated drivers to make over taking risks.Last week on a trip to AKL following cars and motorhomes 70-85k from Waihi to south of KK before over taking lane.There were places where they could pull over,some did. Otherwise traffic very well behaved.

There is nothing wrong with the road, it is the impatient idiots and chancers that cause the accidents.

Here we go once again concentrate on your driving and leave your bloody phones alone. ITS NOT THE ROAD its the idiots on it

Just my personal opinion from a guy who’s driving this road 5 days a week for 15years .people want to go a 100 + and you just can’t do it anymore.lower limit and get rid of the passing lane or make it a free turn leaving omokoroa and some bloody roundabouts in the high use side roads

SH2 is a joke something needs to happen if it was a cycle way it would happen I feel sorry for the omokoroa people for the wait they have to get out someones going to get killed just when ...... and the Wairoa bridge is another joke traffic moved better when they closed the road

The fact is, traffic volume growth has exceeded the safety threshold for several roads leading in and out of Tauranga. My view is that roads should be designed to allow for human error and poor decision making. The busier the road, the more forgiving the design.

Its not the rd

Its not the rd its the people on it doing silly things like texting wake up and leave ya phs alone. This never use to happen so much till texting on your mobile ph came out. So wake up and look at your self and STOP blaming the rd

If you want 4 lanes, change the Government

Forget calling on the Government to reconsider. Nearly 4 years of smiles, lies and photo shoots. Nothing delivered. Get a solid National government back in, then you’ll get progress.

I agree the road can’t cope with the increasing amount of traffic. If you increase the amount of lanes, what happens when we get to the Wairoa bridge ???? We need another road !! The accidents are actually caused by the idiot drivers not the road ( drive to the conditions).

i wish people would get their facts right. there is no such thing as killer highways. highways and roads dont rise up and kill people it’s the stupid drivers that kill people. same as guns. it’s the person that pulls the trigger that kills people.