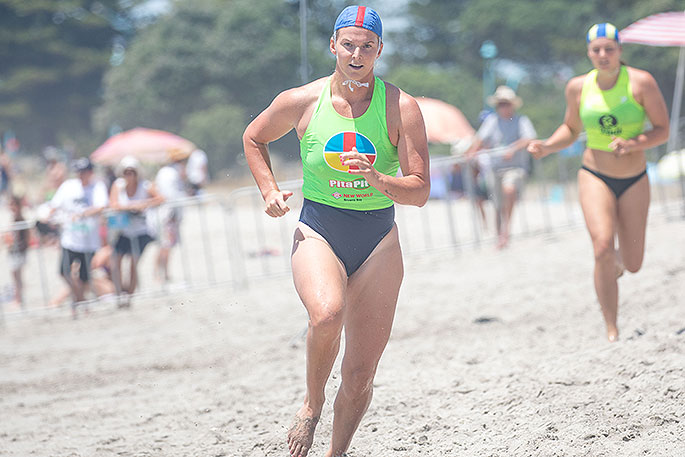 : Rachel Clarke on her way to victory in the ironwoman at the Eastern Regional surf lifesaving championships in Mount Maunganui. Photo by Jamie Troughton/Dscribe Media

Rachel Clarke's carefully honed lifesaving instincts promise to make 2020 a huge year, both on and off the beach.

The 29-year-old Mairangi Bay surf lifesaver and ocean paddler dominated the Eastern Regional championships in Mount Maunganui over the weekend, collecting a clutch of medals including the open women's ironwoman and ski race titles.

She's also got a big year looming in her professional life - as a diplomatic protection officer with the New Zealand Police, she has an election looming, promising plenty of work.

She has the ocean ski paddling world championships to prepare for in Portugal in September, while she also has unfinished business at surf lifesaving's national titles in Gisborne in March, a week after her 30th birthday.

"My goal is to win an open women's ski title, which I still have not done, and I'm going to keep going until I can do that," says Clarke.

The closest she's come is second two seasons ago, to her illustrious Mairangi Bay teammate Danielle McKenzie, but Clarke feels that, like a fine wine, she's getting better with age.

"I definitely think I'm racing smarter these days, especially with my recovery and nutrition and what I do in between races like staying out of the sun."

There was plenty of sun to contend with at the Eastern Regional champs, with Bay of Plenty temperatures soaring past the 30deg mark. It made for an exhausting schedule for the nearly-850 athletes, who competed across three days in a range of lifesaving disciplines.

Clarke's ironwoman title was no fluke - this year the 10th anniversary of her breakthrough as a surf athlete when she won the under-19/open ironwoman national championship double in Gisobrne - but it doesn't get any easier, having to fend off teammate Sam Rowe and Camille Rosa-Perrotteau (Mount Maunganui) with strong ski and board legs.

She also added team golds in the ski relay, the board relay, the surf teams and the taplin, after kick-starting the perfect ski weekend by winning the women's double ski with Samalulu Clifton and the mixed double ski with her fiancé Sam Mayhew.

She didn't have it all her own way, however, settling for bronze in the open women's surf race. That was won in extraordinary fashion by Omanu prodigy Lucy Bartlett, still a week short of her 15th birthday, with 17-year-old Lucy North (East End) grabbing silver. 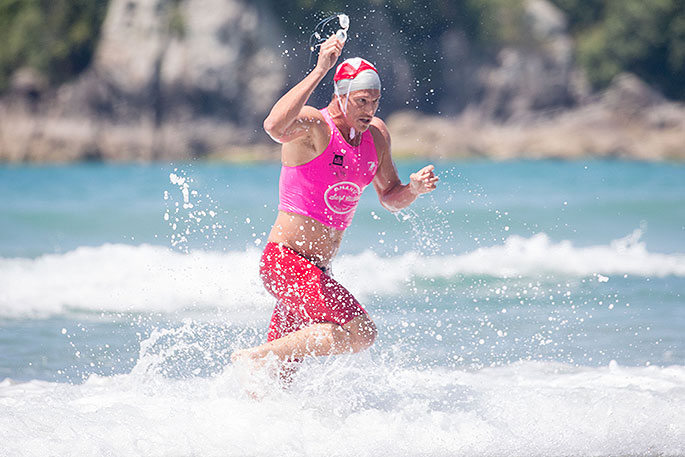 Max Beattie (Omanu) on his way to victory in the ironman at the Eastern Regional surf lifesaving championships in Mount Maunganui. Photo by Jamie Troughton/Dscribe Media

Other key results saw another Omanu star, national representative Max Beattie, take out the open ironman and surf race double, though he had to settle for third in the board race final behind national champion Scott Cowdrey (Papamoa) and Mount Maunganui's Lincoln Waide. Waide also finished second in the ski race final, behind East End's Joel Meuli.

For the 10th year in a row, hosts Mount Maunganui took out the overall club points crown, pulling well clear on a dominant final day to win by a massive 76 points from Omanu. It's also Mount's 12th win in the past 15 years. 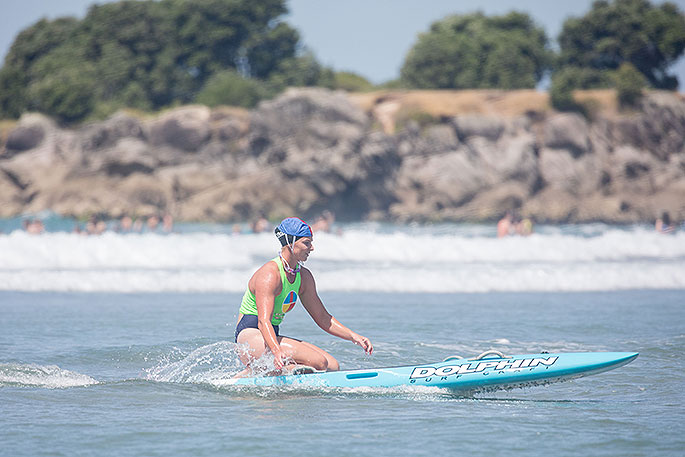