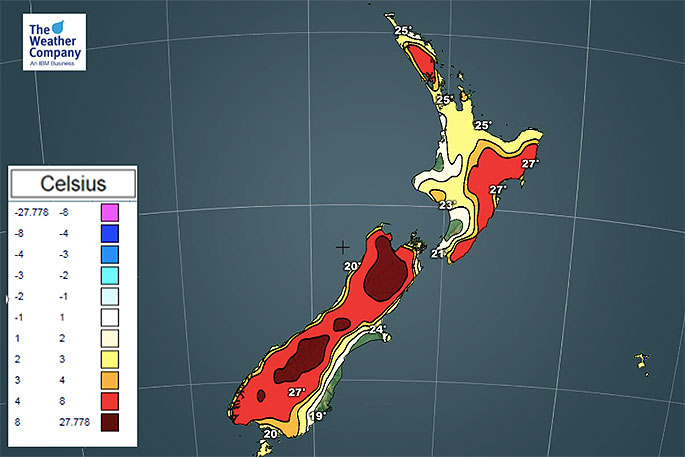 With the exception of a few regions, most parts of New Zealand will be kicking off February even hotter than how they left January.

"This coming Sunday, we'll have a nor'west flow direct from Australia and/or the sub-tropics helping to push temperatures into the 30s for some," says head forecaster Philip Duncan.

The east and north of both islands look to be most impacted by extra heat, while low pressure in the Southern Ocean is helping to fuel windier weather - cooler winds to the south and hotter winds further north.

This coming Sunday (and into next week for the North Island) expect places like Gisborne, Napier, Hastings, Northland, Waikato and parts of Canterbury, Marlborough and Nelson to all climb into the 30s.

In fact, inland parts of both Gisborne and Hawke's Bay regions have the potential to climb to 33C to 37C degrees early next week for a time, provided al the ingredients line up.

There is no immediate cool down coming for the North Island's hottest regions but a potential (not yet locked in) easterly breeze around Waitangi Day may help some in the east cool down a little.

NOT ALL HAVE HEAT

"This summer has't been the most summer-like for some parts of the country and in particular the West Coast, Southland and Otago continue on the unsettled trend.

"There are signs coastal Otago and Southland may have daytime highs back in the late teens again for a short time next week as Southern Ocean airflows return with a windier even more unsettled pattern."