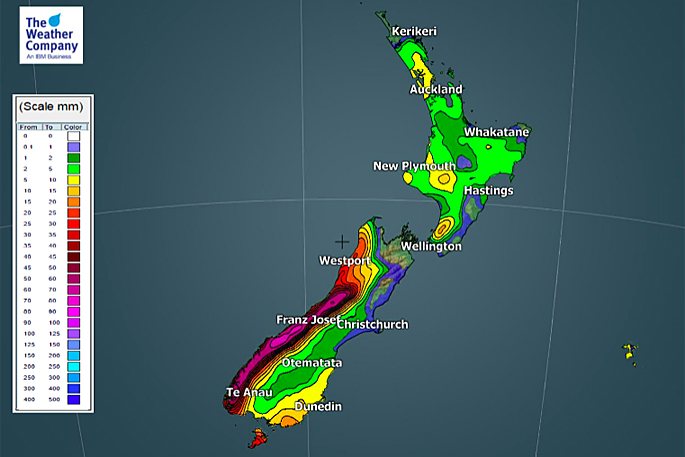 Five days upcoming rainfall, from 7am Monday to 7am Saturday. Image: WeatherWatch.co.nz.

A few showers are likely this week in New Zealand's driest regions but once again the bulk of the rain is falling in places that don't care for much more, says WeatherWatch.co.nz.

Showers in the upper North Island will be hit and miss but the odd one may be a little heavy on Wednesday, giving some places 1 to 10mm of rain. Some might get more than 10mm but the flip side is that others may get nothing.

"So by no means is this any serious reversal of the almost year-long-big dry across northern New Zealand."

There are also parts of Canterbury, Northland, especially the Far North, and the Waikato plains which may miss out on any rain at all this week.

WeatherWatch.co.nz says Australia's drought is truly in northern NZ now and spreading into some other spots too with Northland, Auckland, the northern half of Waikato, Warirarapa, parts of Manawatu and North Canterbury all facing very dry to drought conditions. Back in September 2019 WeatherWatch mentioned Australia's big dry was locking in to the top of the North Island and our first climate update in November 2019 warned of a hotter and drier than normal summer for the top of the country in particular as we kick off 2020.

A very active Southern Ocean is producing repetitive rain events for the West Coast, especially south of the main centres down into Fiordland, and it's this cooler air flow that is also hugging the Coast, Southland and parts of Otago this summer - even brushing Wellington a little at times - while further north high pressure out of Australia is keeping the weather hotter and drier.

February will kick off with more solid, dry, hot air pressure over the upper North Island which means the South Island will be more exposed to rainmakers and wind events (more like a spring/autumn) pattern at times - but for northern regions of the South Island that may create hotter, drier, weather too.