Juggling and circus festivities for all 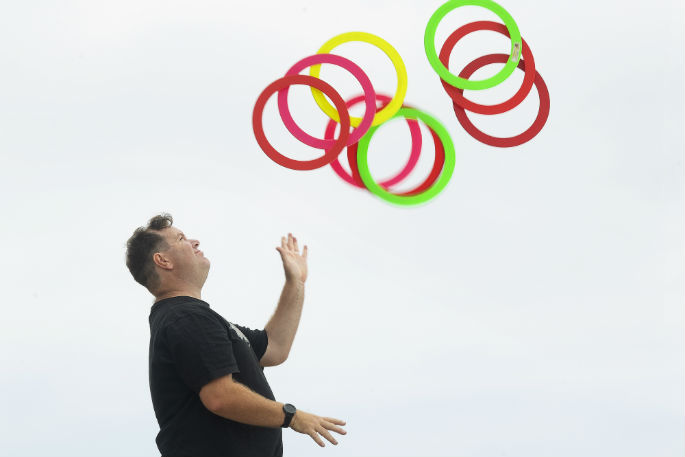 One winning master-juggler will wing their way to Mexico after a competition next week in Katikati.

"These guys are beasts - we are talking about top New Zealand and Australia jugglers," says competition judge Jason Butler.

"Juggling three balls is hard enough, but these competitors will be juggling up to five clubs."

The International Juggling Association Oceania Competition is taking place on Thursday, January 30, in the Katikati War Memorial Hall as part of the 2020 NZ Juggling and Circus Festival.

Eight professional jugglers from across Oceania will battle it out, with the winner qualifying for the 2021 Juggling World Cup in Mexico.

Jason says the competition will showcase "world-class jugglers", although none of them are from the Bay of Plenty.

“We are starting to get momentum in the Tauranga juggling scene, we don’t have those kinds of jugglers yet.”

Nonetheless, he encourages people to come along and witness the magic first-hand.

The Juggling and Circus Festival, which runs from January 30 to February 2, will include a range of workshops for eager beginners, such as juggling, acrobatics, aerial and circus.

Other events part of the festival will include a stage show, juggling combat, fire jam and ‘circus Olympics’.

Jason, who is also the festival host and a professional circus performer, says this annual event helps circus flourish among younger generations.

“We are so supportive – kids who have just learnt something new can perform it at the festival and the crowd will go wild. That’s because we know how hard it is and we want to support the next generation doing circus,” he says.

“It’s such an encouraging, supportive environment to learn in.”

He says the country’s circus industry is slowly growing due to world-class artists sharing their talents.

“The industry is growing and what we are seeing is astonishing. So many are sharing their skills at gatherings around New Zealand.

“This is helping younger generations get into it and with that our ability is starting to increase."

Jason says circus performances have the power to help people, simply by putting a smile on their faces.

The festival is taking place at the Aongatete Lodge in Katikati. For more information, visit: www.eventspronto.co.nz/NZJCF2020