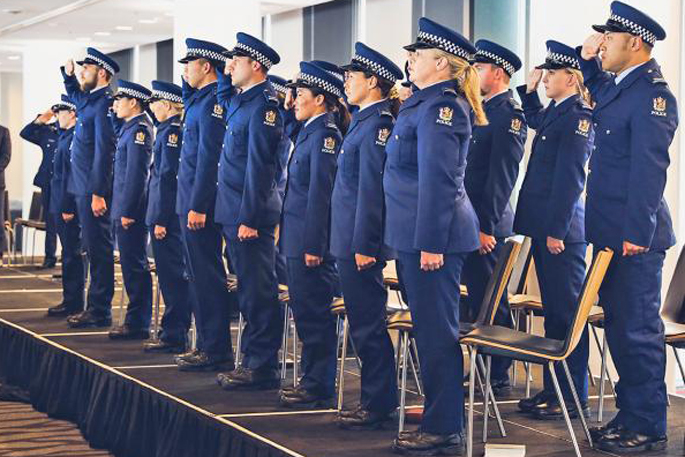 Among the 18 graduates is Jo Nelson, returning to 'blue' after more than 20 years. Photos: New Zealand Police

New police officers have graduated after completing their training as part of the Tāmaki Makaurau based Wing 333, section 5.

Commissioner Mike Bush was in attendance alongside the minister of police, Hon Stuart Nash at the ceremony at Eden Park. The three Tāmaki Makaurau district commanders superintendents Jill Rogers from Counties Manukau, Naila Hassan from Waitematā and Bruce O’Brien, acting district commander for Auckland City District were present to welcome their new constables.

The 18 recruits will be posted across Tāmaki Makaurau: four in Auckland City, nine in Counties Manukau and five in Waitematā.

The new constables from Wing 333 section 5, are made up of 11 women and seven men, speaking languages including Russian, Korean, Cantonese and Mandarin. This diversity was acknowledged by a karakia including five different languages.

Among those graduating is Jo Nelson, who returns to police after more than 20 years.

Originally graduating in 1989, Joanna served in Auckland City and qualified as a detective before leaving in 1996 to start her family.

Jo, who will work in the Waitematā district, has since been through university and worked as a teacher.

“I’ve been through some challenges and adversity in my own life, as well as raising three children as a single mother,” she says.

“I’ve got a different perspective and I still think I’ve got something to offer.”

Policing will also be in the family for Dan Stansfield, who joins her husband in being a member of police. 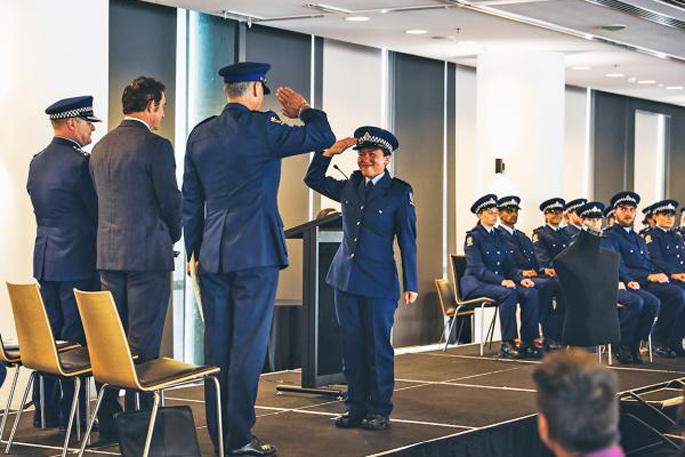 Dan, who speaks Mandarin, gave up a nearly two decade career in banking before deciding to join police.

“I had been working in an office for so long and I felt like I wasn’t learning anymore.

I needed to learn something different,” she says.

In re-evaluating her career, Dan decided to start training at the gym and get herself fit.

“I heard a lot about the job and thought it sounded really interesting.”

“The training has been really intense and a challenge in different ways, but at the same time I’ve learned so many skills.”

Recruitment numbers for the year and already looking good with over 200 applications received for police in the first few weeks of 2020.

Jo Nelson says she has spoken with people who are interested in joining, but are concerned about not passing.

“My advice is to feel the fear and do it anyway.”

Three graduates posted to Counties Manukau were recognised at the ceremony:

The Commissioner’s Award for leadership was awarded to Grace Rawiri, recognising the potential to lead self and others.

The Patron’s Award for the second top student was awarded to Rachael Neville-Lamb.

The Minister’s Award for the top student was awarded to Tom Knight.