Rees bids farewell with a hat-trick and lap record 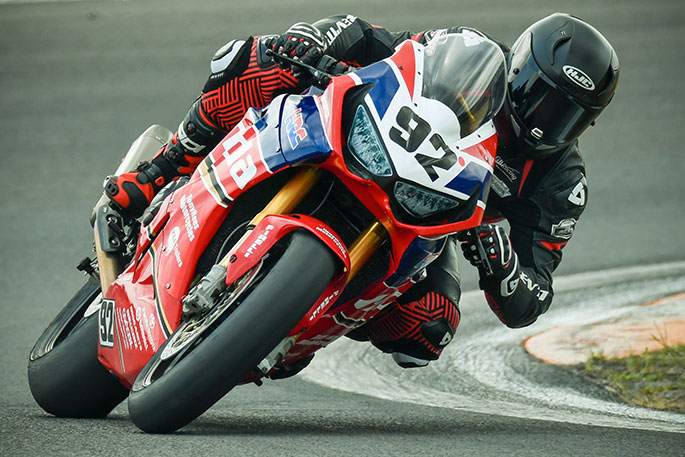 Whakatane's Damon Rees (Honda CBR1000SP1), who scored a hat-trick of wins in the glamour superbike class at Timaru and also broke the lap record there at the weekend. Photo by Andy McGechan, BikesportNZ.com

Whakatane's Damon Rees may be comfortably leading the glamour superbikes class, but, sadly, the Honda man won't be able to win the national title this summer.

The 24-year-old was again in scintillating form, further enhancing the No.1 status he achieved at the first round of five in this year's New Zealand Superbike Championships in Christchurch a week ago, scoring an impressive hat-trick of wins at round two at Levels International Raceway, near Timaru, at the weekend.

He also smashed the superbike lap record at Timaru in his first race on Saturday, taking his Honda CBR1000SP1 to set a blistering time of one minute 2.529 seconds.

However, that was also the Honda man's farewell performance at home and he shortly heads off to tackle the British Superstock 1000 championships, therefore committing himself overseas while the Kiwi domestic series continues on without him, the latter three rounds of the championships set for the North Island in March and April.

"It wasn't a perfect weekend, actually ... I didn't get the fastest time in qualifying," he says.

"But I'm happy with my results and feeling really confident ahead of my overseas trip."

He leaves in late February and will be based in the East Midlands.

"I believe I'm riding the best of my career and felt I was able to pass riders at will. I think I might need to develop a bit more of a mongrel attitude in the UK though. It will be more intense over there."

Rees was a class act at Timaru, snatching the lead in race three just two laps from the end of the 15-lapper, zipping from third to first thanks to two quick-fire passes on the riders ahead of him.

"That last race win was not easy," Rees admitted. "Those guys were pushing really hard and I just bided my time a bit before making the move and it paid off. The Honda was awesome all weekend."

There is a short break now before the series resumes with round three at Hampton Downs on March 7-8 and then the nationals continue on at Manfeild, on the outskirts of Feilding, on March 28-29, before wrapping up at Taupo on April 4-5.