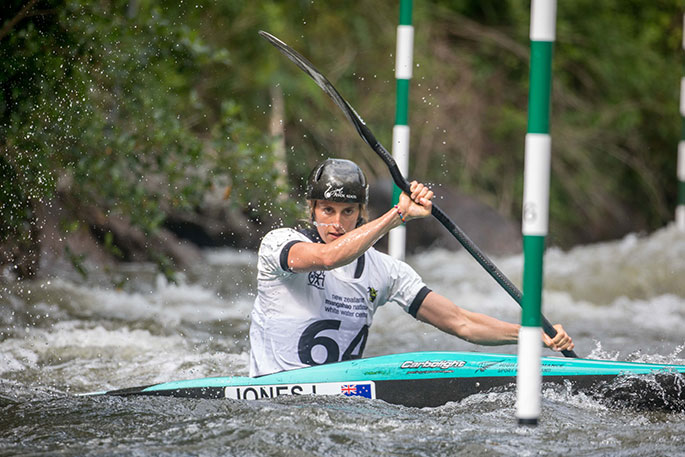 Bay of Plenty's Luuka Jones has kick-started a big canoe slalom year with a double win at the New Zealand Open in the Manawatu.

The triple Olympian - who looks assured of going to her fourth Games in Tokyo this year - edged out Frenchwoman Camille Prigent in the women's K1 final on the Mangahao River near Shannon.

She then backed that up on Sunday afternoon with a classy C1 victory, heading off Spain's Klara Olazabel and Andorra's Andorra's Monica Doria Vilarrubla in the final.

"I'm just really happy to be paddling well in C1 - I had a really tough season last year and just couldn't get any races together and I'm just embracing the fact that I feel like I'm back and in a good place," says Jones, adding that the international contingent made for quality racing.

"I did a few training sessions with Monica and they're both in the top-ten in the world so having that competition just pushes you to go a bit harder and adds that extra bit of pressure, which is good for me."

Jones finished her C1 final in 116.22secs, 1.82secs ahead of Olazabel. Her K1 win was tighter, after picking up a 2sec touch late in her run, leaving her with a 101.27 total, 0.57secs clear of Prigent, who is one spot ahead of Jones in the ICF international rankings.

Cook Islands paddler Jane Nicholas was third in the K1 in 107.61secs, ahead of Martina Wegman (Netherlands) and Vilarrubla. Rotorua's River Mutton was the next best Kiwi, finishing sixth in 118.23.

Finn Butcher grabbed some early ascendancy in the men's K1, meanwhile, ahead of the first Olympic selection race in a fortnight in Auckland.

Alexandra's Butcher clocked a clean 92.17secs in the final, 2.66secs clear of Sweden's Erik Holmer and 3.13secs ahead of world No 20 Michel Smolen (United States).

"I didn't have the best world champs and it put me back a bit in the selection race but now it's something I've got to walk towards and try and boss it," says Butcher.

"This was the first race in a wee while and I needed to adjust a couple of things overnight. I changed boats just after the end of last season and it's going really well now. I'm feeling in good shape physically and everything seems to be coming right."