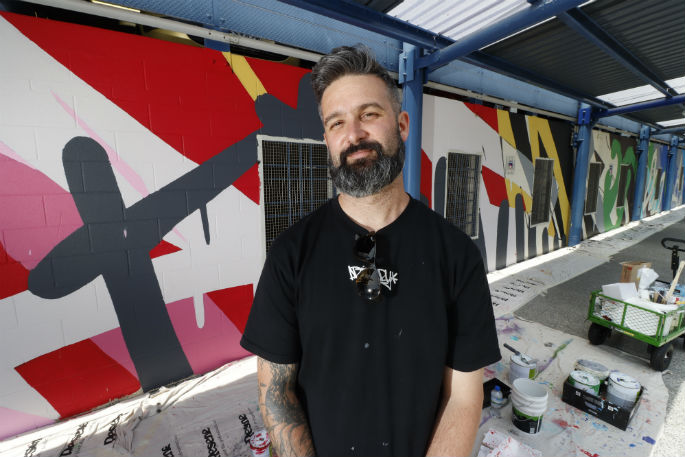 One hundred community members got stuck into the project on Spring Street last weekend as part of local street-art festival Street Prints Mauao.

Street artist Askew One, who facilitated the mural, says the compass gives direction and point’s people to various cultural sites of significance around the Tauranga Moana.

Mauao, Huria Marae, Otamataha Pa, and Tamapahore Marae are just some of the sites incorporated into this large-scale painting.

Askew One, known as Elliot O’Donnell, grew up in Auckland but is now based in Brooklyn, New York.

He has participated in the past five festivals run by Street Prints NZ/AU and says community engagement plays an important role in creating a connection for locals.

“It’s some sort of gateway in helping the community feel a strong sense of ownership over that work and it’s there for them – not being done to them.

“I came from a graffiti world – for 27 years – and the mentality when we painted graffiti was the opposite of that.”

Mural participants engaged with the project in different ways – some curious to find out the meaning of what they were painting, and others just eager to get their hands dirty.

"Some people were just naturally tidy – at such a young age. Showing patience, diligence and painting slow to get a nice sharp edge.

"Others were just running at it - getting paint on themselves, on the ground and the poles. There was definitely room for that too.”

It was important to keep the mural simple for the kids and adults involved, and due to the short time frame of the festival, he says.

“It’s all really simplified and stripped back. The idea was to create big fields of colour that were easy to fill and easy to clean-up.”

For more information on the festival, visit: www.streetprints.org