Planning to pop a manu? 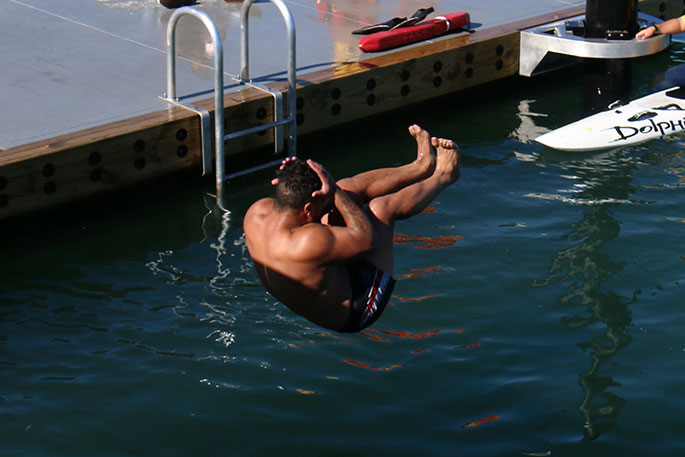 Bass Atkins who placed first in the over 18 category of the inaugural Tauranga Bomb Competition which was held during the official opening of the tidal stairs and pier on The Strand in May 2017.. Photo: Tracy Hardy.

Spend half a summer day on the Tauranga waterfront and you’ll be treated to every bomb technique possible.

If you're planning to nail that perfect manu, water bomb or 'v-bomb' however, it’s important to first understand the physics.

For those who don’t know what a manu is, there’s the normal ‘bomb’ where you curl up and enter the water feet first. There’s also variations on this, such as the staple – hands and feet first; the gorilla – an upside-down cannonball with head and shoulders entering first; and the coffin – feet first with a slight lean back to widen the splash area.

Then there’s the manu, where your tailbone enters the water first, with your body in a v-shape with knees and shoulders as horizontally aligned as possible.

Tauranga people may remember years ago, the bombing competitions off the wharf near Bobby’s fish and chips, with the winner being crowned the Manu King.

Now, of course, we have the Tauranga jetty, pontoon and bombing platform near the tidal steps on the Tauranga waterfront. In May 2017, Bomblife New Zealand held the inaugural Tauranga Bomb Competition there with Ross Davis, 12 winning the 12-14 age group, Jerramiah Hay, 15, winning the 15-17 age group and Bass Atkins winning for the over 18.

The real key to popping the perfect manu lies in the position of the bum. Before even leaving the platform, the bum must be out. Arms raised in the air above your head, back perfectly straight, knees bent ready to launch, and the bum out.

One you jump, the bum is tucked in making the body straight. As the water gets closer, the arms pull down and the legs swing up, with the body folded in half.

The first point to make contact with the water should then be the tailbone, or bum. To complete the perfect manu, the body should be opening up again with limbs flung back and down, stretching across water’s surface. This means the feet and shoulders arrive last, slapping the water and forcing it around the body before rushing into the hollow created by the bum and then exploded up into the air.

When done perfectly, it’s impressive with plenty of splash volume and height.

ACC provide some sensible tips on how to jump safely - look before jumping and check for depth and obstacles; don't jump onto others; don't jump at the same time as your mates; adults - when it comes to looking out for tamariki, supervision should be constant and active, ideally by having someone in the water.

A manu or v-bomb is as Kiwi as backyard cricket and eating pavlova. If you haven’t made a big splash in Tauranga yet, then now’s the time.