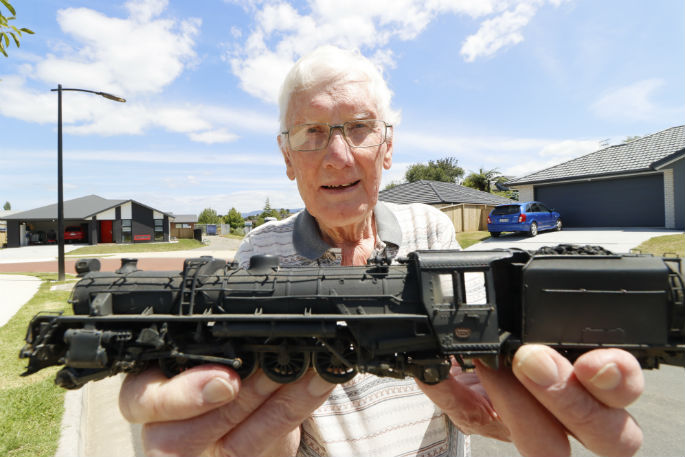 The resurrected 1/64th Katikati station which is part of the Tauranga Model Rail Club show this weekend. Photo: Daniel Hines.

Burned down by arsonists 30 years ago and buried beneath a housing estate, then ‘reincarnated’ and now sitting in a dilapidated tin shed at Sulphur Point.

It’s the Katikati railway station – once a bustling stop-off for people and produce on the east coast main line and then consigned to history books and the March 2015 edition of the NZ Model Railway Journal.

That’s what piqued Brian Smith’s interest. “I saw the article about Katikati railway station – there were photos and a floor plan,” says the long-time Tauranga railway modeler. And that was just enough.

And after six or seven months of patience, a steady hand and total commitment to minutiae, the station was reborn at a 1/64th scale.

No Grand Central or St Pancras mind you – but delightful in its Kiwi simplicity and an important nod to the evolution of the mural, avocado and kiwifruit town and the steam trains and railcars that once called by.

NZR is the modeling genre – maybe after the New Zealand Railways Department, forerunner to KiwiRail.

NZR is what hooked Brian Smith and that’s what sets this modeler apart.

Most modelers are drawn to British and American layouts. Not Brian. He’s Kiwi to the core. NZR through and through.

“My layout represents a small window in New Zealand rail history – logging trains of the late 1950s and early 60s, from Murupara to Mount Maunganui.”

“I built the station without a thought as to where it might end up. Might have been on my layout, then again…” He took the scale replica along to the Tauranga Model Rail Club – and all those enthusiasts pre-occupied with British and American layouts.

“They looked at it and said: ‘crumbs – we better do something about having an NZR’.” In other words, a New Zealand component in the club’s British layout. And there it is today. British rail on one side of the layout and NZR – the Katikati station and rail yards on the other.

It took 22 years to build the East Coast main line through Paeroa, Karangahake Gorge, Waihi, Katikati and beyond to Tauranga and south east into the Whakatane district. Nature threw up a full bag of engineering challenges - rivers, harbours and swamps which demanded bridges, tunnels and cuttings.

Today, a concrete and wood bridge abutment sits in a paddock off Highfields Road housing development where SH2 snakes out of Katikati and off towards Waihi. It’s perhaps the only remaining physical reminder rail once served Katikati. That and a slideshow on the Community Archives website which is a constant reminder trains rolled seamlessly through a town where road traffic is now snarled.

That slideshow tells of rail characters like stationmaster Bob Hampton, assistant Betty Brake and traffic assistant John Heke who unloaded two or three wagons of parcels and goods into the shed each day.

There was Jim Golding, the electric signal maintainer and Jock Elvin, the ganger in charge of the ‘permanent way’ which they called the track. They all live on.

But then at 4pm on September 12, 1978, just hours after the ceremonies marking the opening of the Kaimai tunnel, the last train rumbled out of Katikati. The rail link was axed and the track torn up.

The Katikati station sat there as a sad monument until it was torched by arsonists in May 1988.

The modeler Brian Smith passed through Katikati on steam trains several times – on his way north to see grandparents and once on his way to Papakura Army Camp for compulsory military training.

“You left Taneatua about 8am and got to Auckland about 5pm.” There were lots of stops for pies and cuppas. “That’s why we have such good rugby scrums – fighting our way to the counter in a railway cafeteria.”

“A significant amount of time and attention,” says the very satisfied modeler.

The Katikati rail yards will come to life again at the Tauranga Model Railway Club’s annual show at the Mount Maunganui College Hall tomorrow and Sunday between 10am and 4.30pm.

To see the slideshow yourself, visit: www.westernbay.recollect.co.nz/nodes/view/455