Police sign up to support No More Ransom project 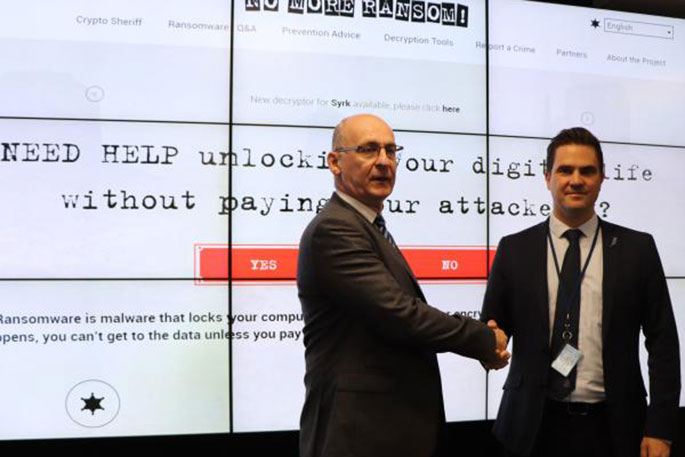 NZ Police are excited to announce they have become a supporting partner of the “No More Ransom” project, an initiative which has helped more than 200,000 victims of ransomware recover their files free of charge since being launched in July 2016.

No More Ransom is a public-private partnership which provides an online portal where victims of ransomware can access decryption tools and keys for free.

The portal pulls together all decryption keys recovered by law enforcement partners, as well as decryption tools developed by industry partners around the world.

“All victims need to do is upload two encrypted files to the portal. The portal will identify the strain of ransomware involved, and if the appropriate keys or tools are held, it will automatically decrypt the victim’s computer.

“We know the losses from ransomware are likely to be much higher than those reported to authorities.

“This is because a significant number of those affected by ransomware do not report incidents to authorities.”

No More Ransom estimates that since the portal was launched in 2016, more than $108 million in ransom payments has been prevented, hitting the criminal business model behind the ransomware hard.

“In general, those behind ransomware attacks demand around US$200 from victims to unlock their computers,” says Iain.

“Many victims pay up, making ransomware attacks a very profitable business for the offenders.

“No More Ransom completely disrupts their business model and puts the power back in the hands of the victims.”

Find out more about the No More Ransom initiative at nomoreransom.org

If the machine login is blocked, it is difficult (but not impossible) to unlock it. It involves getting access via the bios and analysing, copying and replacing certain control blocks from internal "secret" backup areas that Windows maintains. Specialist work and not for most people. However, you can bypass the login by booting from a DVD or stick into a clean copy of Windows or Linux and the HD is then visible so the files can be copied and uploaded to the site for decryption. The machine will still be locked, but once you have retrieved your important files you can reformat and reload. (Or get someone knowledgeable to unlock it for you.)

A few years ago my elderly neighbour fell victim to this scam and was unable to log in to his windows computer. (It was before they started encrypting the files...) He was advised that the hard disk would need to be reformatted and he would lose all his data (grandkids pictures, mail, etc.) He asked if I could help and I did. It took me 7 hours but I managed to get the blocks removed and give him his system back with everything intact. However, had it been encrypted, it would not have been possible. This is a brilliant service and I utterly commend the people who have set it up and made it available. Scammers are scum and don’t care about the distress they cause.

How can someone upload files to this portal if their computer is locked out?