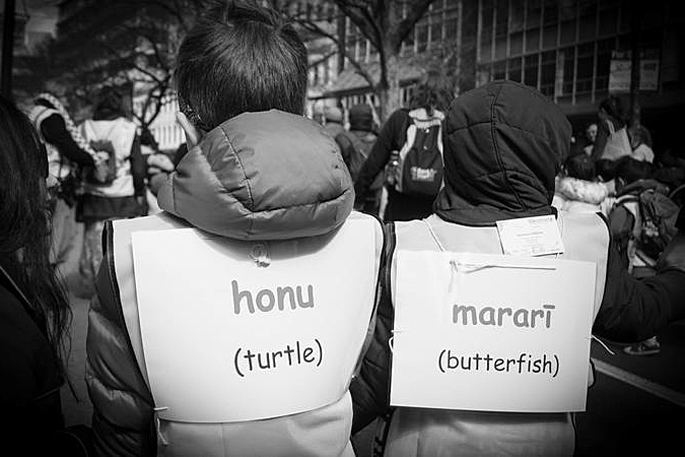 Te reo Māori will be added to one of the world's most popular language learning app by the end of the year.

Duolingo has more than 300 million users around the world, largely learning languages like English, Spanish or French.

But in recent years the company has been working to help revive native languages, and te reo Māori is next.

According to the 2018 census, the number of people who can speak conversational te reo Māori is on the rise, up to four percent from 3.7 percent between 2013 and 2018.

Te reo teachers are hoping that that will rise further with the addition of te reo Māori to the Duolingo app.

Myra Awodey is leading the te reo Māori project at Duolingo, and says the course should be ready for public use by the end of the year.

"We do have a good plan for the first 50 skills of the course, but there's still a long way to go before we have anything to release to the public," Myra says.

"And we are still looking for more people to help us flesh out that curriculum."

Duolingo is a free platform with ads which will teach the basics of the language, with specific segments on things like greetings, food, or transport.

It starts with simple phrases - for instance in French, le chat noir, the black cat, or in te reo Māori, te ngeru pango.

By the end of the course, people should have a basic understanding of the language.

Gary Pointon is the person who prompted Duolingo to construct a te reo Māori course.

"I learnt a bit of Spanish and also French on Duolingo, loved the app, and thought we need te reo on this, it's absolutely asking for it," Gary says.

"I was getting in touch, or trying to, as much as possible about a year and a half ago, and then about eight months ago they got in touch with me saying, 'hey, we want to do a little tester, do you think you could get some scripts written down and we'll process them through our system and see if it works'."

It worked, and Duolingo asked Gary if he could form a team to start work on a te reo Māori course.

Gary says Duolingo is looking at providing the upgraded, ad-free premium platform to teachers and students, free of charge, for people learning te reo Māori in the classroom.

Broadcaster and te reo Māori teacher Stacey Morrison, who is part of the team, says there were complications with adding the Māori language to an app.

Consideration has to be given to the cultural importance of the language, but she says the more people learning, the better.

"It's accessibility, it's a familiarity with how to access and language learning, but in terms of actual spiritual and the particular nature of te reo Māori, it does present some challenges in terms of designing our course.

"But I think expectation wise, we shouldn't go, okay, from this I'm going to get a real esoteric and holistic understanding of te reo Māori."

Leader of the project, Myra, says Duolingo is conscious of the cultural aspects of language learning.

"For the most part, we believe that language should be taught by the speakers and that the speakers own the language," she says.

"In this case we do kind of feel that there's a mandate, because of the number of people who've asked to be able to do this."

Duolingo has added Irish Gaelic, Hawaiian and Native American Navajo to its platform in the past few years, and hundreds of thousands of people are now learning those languages.

Scottish Gaelic was added to the app in November, and despite a native speaking population of just 58,000, more than double that are now signed up for the app, most of whom are Scottish.

Stacey Morrison says Duolingo is a great start in helping revive languages, and will be a great tool for te reo Māori teachers.

"For indigenous languages that are on the brink of survival, these kind of apps are great, and we need to work at our own personal level and our iwi level and look at what is meaningful to us.