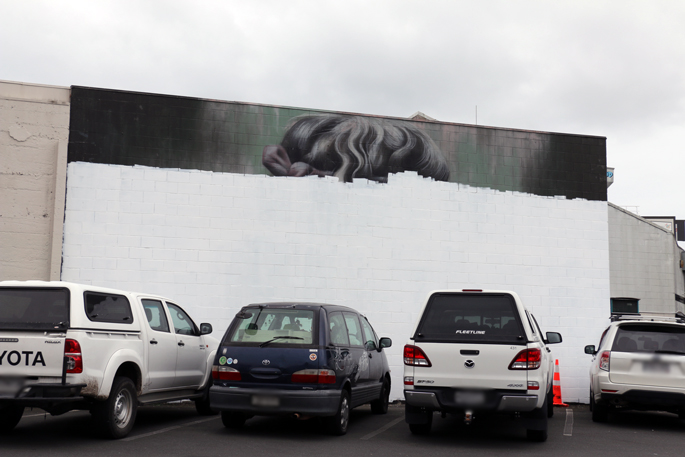 The In Te Papatahi mural in Masonic Park which has mostly been covered by white paint. Image: Caitlin Houghton/SunLive.

A Bay of Plenty resident is speaking out after finding out a mural in the Tauranga CBD is being repainted.

Anne McMillan says she doesn’t usually get angry about things but she says she is really upset about this.

The mural is Owen Dippie’s mural of Charles Goldie’s Ina Te Papatahi which was on a wall in Masonic Park.

“At the moment it’s being wiped, completely wiped, to be replaced with something else.

“I think it’s to do with how at the moment there are people who are wanting to make Tauranga a mural city. Well what I think what they should have done, is they should have picked the murals that were of a too high of standard to be damaged and left those, and worked around the other spaces.

“If they can actually paint over a representation of a Goldie painting, then I’m scared for the one that’s on the big wall, that’s three stories high. 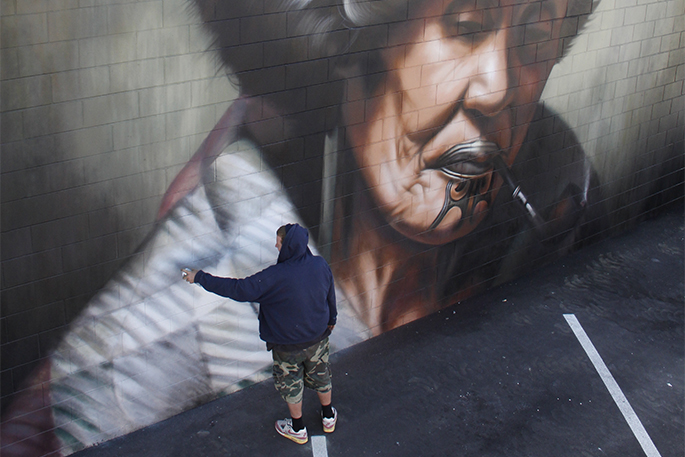 “I think they should have selected anything that was a very high standard and left it, and then designed their pictures around the other spaces.

“Why were the exceptional murals not identified first before everything was wiped clean.

“It’s a terrible waste of money and it’s very arrogant,” she says.

Jah says all 18 artworks have been created in collaboration with local hapu and kaumatua based on the theme ‘Ahakoa he iti, he Pounamu’ the English translation being ‘although small, it is precious’.

“This theme signifies the importance of our children and youth and the importance of taking small steps to care for them as a community and the focus on looking after the environment and earth so that it is still here for future generations.

“All 18 murals are bases on this Whakatauaki and are spread on walls throughout Tauranga, Mount Maunganui and Te Puke.

“The artwork has to mean something to the place it is painted in. This is important to our overall kaupapa.

“In total, Street Prints have curated over 60 public artworks in Tauranga alone. This year we had to paint over five old murals which have been enjoyed by the community for the past four years.

“Murals only have a life span of up to five years depending on their position to weather conditions and exposure to the elements. It also depends on the quality of the painting of the mural.

“With each mural we painted, we gain permission from wall owners to paint these murals and within the contract, it stipulates a timeframe. Some of the walls we painted back in 2015, wall owners wanted us to paint a new mural on them and that’s okay because they own the building. We understand that this type of art is temporary,” says Jah.

There are blank walls all over the CBD that are crying out for some artwork, why paint over such an awesome existing piece?

… to hesitate before destroying ANY work of Art? This was a beautiful picture, even if it was a reproduction of an original. But leaving the content aside, surely, a bit more thought and consultation could have been given, as the article suggests. Did anybody think the Public might be interested to decide whether the murals should be replaced? OK, if there is a contract with the owners to replace them after a certain time; that’s a bit like admiring a sand sculpture until the tide comes in. But, in principle, I agree with Anne.

The murals in Katikati have lasted a lot longer than 5 years.