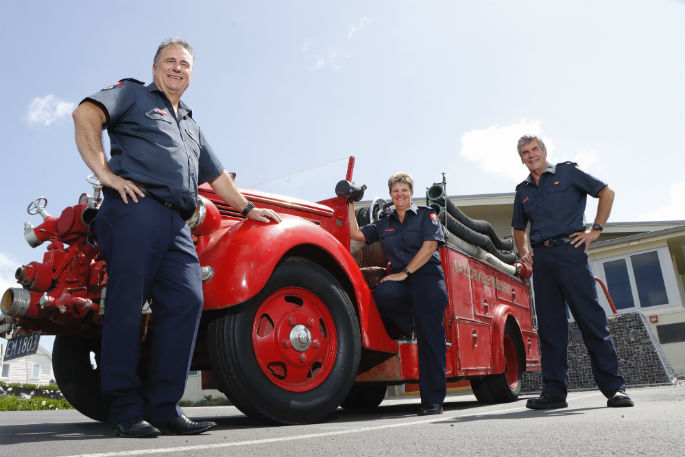 Paint’s peeling, there’s some cosmetic rust but the engine purrs like new.

“All the bones of it are there, it just needs is some love and affection,” says senior station officer Keith Merritt.

It’s the newest addition to the Te Puke Fire Brigade’s fleet and the crew say they have been trying to track down a vehicle like this for years.

The Te Puke Fire Brigade, which formed in 1913, owned an almost-identical fire truck in the late 1930s.

However, according to him, this purchase is the next best thing.

“Our brigade actually had a brand new 1938 V8 Ford fire truck back in the day.

“This purchase is a nice fit for the brigade. We are 106-years-old now and it’s just putting something back that we once had.”

Keith and Dale agree the 80-year-old flathead V8 is in "pretty damn good condition" for its age.

The firetruck was operational from 1938 to 1971. It started in Upper Hutt then moved to Patutahi, a small town near Gisborne.

Then it spent several years Southward Car Museum in Paraparaumu.

Tyre replacement, flushing the radiator and getting a warrant is the next steps for the vehicle.

"It's drivable at this stage, most of the damage is cosmetic,” says Dale.

“With a strip down and paint job, and if we fixed all that coachwork and got some new tires it will be good to go.”

The brigade’s long-term goal is to restore the vehicle, getting it in ‘pristine condition’ for the Te Puke community to use.

“We want to be able to use it for community events, A&P shows and possibly hire it out for school balls and weddings,” says Dale.

They plan to fundraise for restoration at various community events, charging people a gold coin donation for a ride.

“The restoration would just pay for itself that way. I can bet money that people from the ages of two up to 82 will be queuing up all day for a ride on this,” says Dale.

He says the crew are all eager to help restore the vehicle, which will help strengthen their comradery and sense of whanau.

"It could have been parked under a tree to rot away. It’s in good hands now," says Keith.

“Five of us jumped in and took it down the petrol station to top up the fuel when it arrived on New Year’s Eve,” says Dale.

“We got so many looks, waves and yells of support from the community on our way. It was just amazing.”

Dale speaks highly of the local community, saying this purchase wouldn't be possible without their support.

"Te Puke has an amazing community who support us, it's massive and we truly appreciate it.”