What cost a carpark? 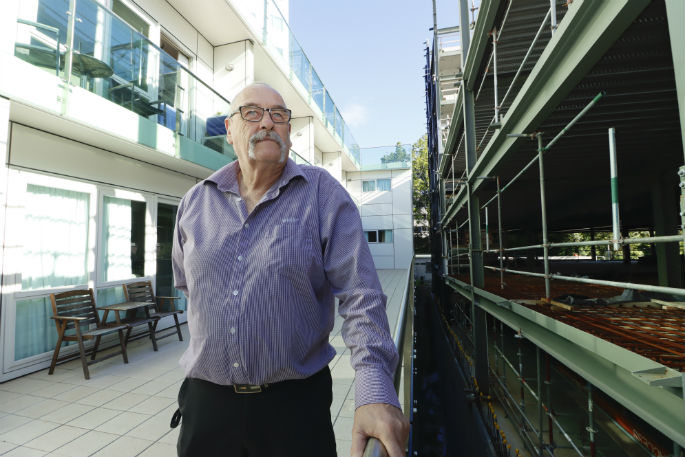 “Progress - it’s all about progress,” says a philosophical Bram van Berkel, apartment owner and manager of the Quest Apartments in the Kingsview Towers on Durham Street, Tauranga.

He’s standing on the balcony outside apartment 016.

Once tenants and guests sat on this balcony with a flat white and soaked up the early morning rays as the sun rises over the Strand, the inner harbour and Matapihi. Spectacular! Then at the other end of the day, with a glass of wine, they could watch the sun be swallowed by the trees surrounding Wharepai Domain. Idyllic!

But, for apartment 016 and the eleven other upmarket most affected apartments on the first two floors in closest proximity to the carpark, that view has been destroyed by the tangle of steel, a Meccano set construction going up next door – the $27 million plus Harington Street Transport Hub.

That’s a measure of his mood. He’s disappointed.

And in time, when work on the problematic carpark resumes, a concrete wall will rise in front of the Meccano set and completely obliterate the view from the apartments – the harbour, Matapihi, even the cars, ramps and steel, all gone. They are vistas, Bram reminds us, that were paid for by the apartment owners.

And while we can expect new buildings to grow in a city, Bram says, he was of the understanding the original ‘carpark’ building concept was for two storeys above ground level. Somewhere along the line it was revised upwards to nine and then subsequently down to seven, after objections from a body corporate of Kingsview Towers.

“We never fully understood the abnormality of what we were dealing with.”

He shrugs and spreads his hands in dismay.

“While we can’t stop progress, sometimes we don’t like it.

“But we live with it, even though, in this case, it is disappointing due to the impact the carpark building will have on both Kingsview Towers and Harrington House.”

Harrington House is an office block.

The carpark is presently in mothballs, stalled because of issues with seismic joints which allow the building to move in an earthquake.

“We are constantly hearing rumours it might have to be torn down, lowered, disappear, be rebuilt, something else put in its place and/or...? We have asked, but we can’t get answers.”

He would like the Tauranga City Council to ‘be good neighbours’ and consider some form of mitigation for at least the 12 apartment owners that are mostly affected by this build.

“I have grave concerns these apartments could become ‘sick’ because the sunlight will no longer be able to get in and kill the bad spores.”

He recommends upgrading all the lighting in the apartments and ramping up the air conditioning units to assist in mitigating against the coldness and dampness created by the carpark in winter-time. It would be nice, he says, if the council came to the party. He would also like the council to make the wall “more palatable for owners, visitors and guests, to soften it”.

He suggests they cap the one-metre-wide by four-metre-deep gap between the carpark and the apartments so they can install planter boxes with shrubs and trees and provide security from below.  But, he says, the council has said no – apparently, it’s about the ongoing cost of upkeep and maintenance.

And whether any greenery would reverse the impact on valuations is another matter.

“Owners are seeing a much-reduced return for their investment from two to three years ago.”

Enough to say a view can be worth many thousands of dollars.

Even Bram’s apartment on the fifth floor will lose all views of the Strand, inner harbour and Matapihi.

“Disappointed,” he says. “Not only for us but for all the other apartments up to the sixth floor that will have their vista blocked in some way.”

The harbour and Matapihi will become a concrete wall. And he says the value of his investment, his home, has taken a hit. He has lost 23 per cent in capital value according to the latest rateable value compared to that of three years ago.

He says there has been a lot of discussion and trading emails with Council, but little action, lots of questions but few answers.  Like what will Tauranga motorists really stand to gain?

“They have allowed for 250 bike spaces and 550 carparks – but it’s believed something like more than 400 will be leased. In terms of public parking that isn’t going to be that great.”

He also suggests the southern end of the CBD is rapidly becoming the commercial heart of Tauranga.

“So who is this carpark really for?”

Bram, for the time being, can still gaze out over the harbour, watch the sun come up and think life is all good.

“We will miss the mornings."

And he wonders, not too quietly, whether the carpark project would have proceeded had it not been a council project.

“I am sure if it had been a commercial carpark development that this would not have happened.”

Is the carpark going up or coming down, when, how much will it cost, and who will pay? And will the council assist with mitigation for the 12 worse affected apartments.

The owners are disappointed but have told Bram to do what he can to protect their asset.

The Tauranga City Council has been approached for a response.

Firstly let’s all shed a tear for those that can afford an apartment in the city centre with panoramic views. My hearts bleeds for you. Just as it bleeds for those struggling to buy it even rent somewhere to live anywhere in the city. Secondly do some research. On the Land Information report, it is clearly noted that a multi level car park could be built on this ground. Any affected apartment owners have their own due diligence to blame before buying. The city plan allows to 49m, if this was a private developer they would build to that no questions asked. Because it’s council everyone is looking for a handout. The car park should be built to the requirements of the city 7 storeys 9 storeys, whatever it needs. That’s what this land is for.

Come on round as we are more than happy to show you the result of Council decision - the invite has been out there for a very long time. Please note that we have been requesting information concerning this build for the last 2.5 years with minimal and/or delayed response until things have progressed to the next stage.

Again I question the BULK of the building. No one in Council has told us when they decided to go from 2 stories to 9 above ground and the complete disregard to being good neighbours. History speaks for itself as we look around and see and hear how Council listen their neighbours and to what the rate payers want and need

A little knowledge, and all that

The council’s intention to build a multi-level car park on the Harington St site was signposted on the site long before the advent of Greg Brownless as Mayor and/or the commencement of construction of the Kingsview building. The parking building didn’t go ahead at the time due to cost considerations . Murray Guy’s comments are right on the mark.

Murray LIKE YOUR USE OF CAPITALS. I CAN ONLY ASSUME THAT YOU WERE ONE ON THE ORIGINAL DESCISION MAKERS REGARDING THE FINAL BULK / SIZE OF THE BUILDING. WHY NOT BUILD IT 3m FROM YOU FRONT WINDOW. We agree that residents where aware of the Carpark - but the extent / height is in debate. It is interesting to note that both Harrington House and the Towers do not cover the entire air space above 2 floors. On discussion with some of the long term owners there is a question on the height and size of the building and Council dismissal to owners. I question Council ability to do things that they believe is best for them and to have consideration for their rate payers.

Reality not quite as painted

REALITY: DEVONPORT TOWERS WAS BUILT VERY MUCH AWARE THAT THE CITY COUNCIL INTENTION WAS TO BUILD A MULTI LEVEL CARPARK OR SIMILAR BUILDING. HOWEVER , REGARDLESS OF OWNER, THE VIEWS ENJOYED WERE ON BORROWED TIME FROM THE OUTSET! NOBODY WOULD HAVE PURCHASED AN APARTMENT WITHOUT THAT KNOWLEDGE AND THEY WOULD HAVE PAID A PRICE THAT REFLECTED THIS REALITY.

I feel really sorry for the owners of the apartments affected by this car park it is obvious no consideration was given to these people losing a lot of equity in their purchase, the previous council under Brownless should be ashamed of themselves.

Bram,you have been in business for a few years in Tauranga now.You must realise that so much goes on in our elected council that is so secret that you find out exactly what is really happening when the job is partially completed.Feel sorry for your future customers

THAT is simply, utterly DISGRACEFUL!!! I had not realised this at all! Nobody will be able to live in those apartments with that in front of them. No daylighting and artificial light and air will NOT ameliorate the mental and emotional health of anyone living in them. Tear that DISGRACE down and build a carpark that will NOT affect humans negatively. My god, someone has been paid a lot of money to design and build this disgrace! They need sacking! :(