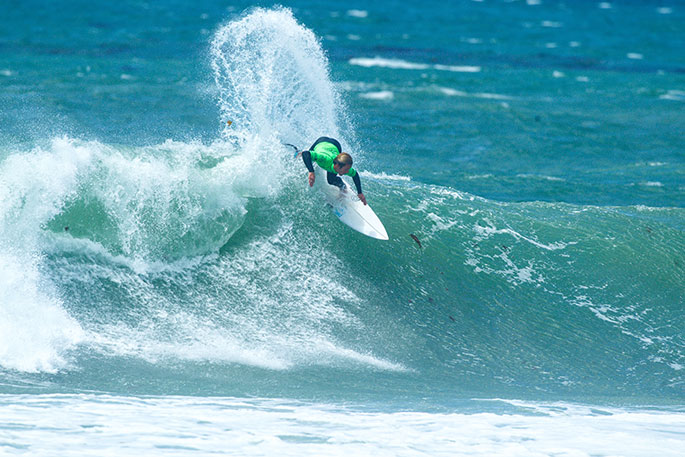 Defending champion Billy Stairmand (Rag) has led the charge into the semifinals of the Health 2000 National Surfing Championships with the final eight surfers determined on Thursday.

A major increase in swell forced a shift north to Karitane Beach after the day dawned at St Clair Beach with swell in excess of 2.0m steamrolling into the primary venue.

Karitane Beach offered up more manageable waves in the 1.5m range but the winds continued to blow onshore all day affecting conditions.

Stairmand surfed to a 15.83 point heat total in his quarterfinal match up advancing alongside local surfer Elliott Brown and he remains on track to claim an eighth national title.

“I desperately want to take the cup home, it is one of my goals this year and I want to make it happen” says Stairmand post heat.

“I’m stoked to be down here in Dunedin and be putting the rashie back on for the first time 2020. It is going to be a big year for me and it is always good to start the year off competing in New Zealand."

Stairmand’s performance looked a notch above his opponents with exceptional speed through his turns and added flare on each wave, the conditions appearing to have little impact on his approach.

“It has been pretty wild the last few days, windy and cold, I guess it is normal South Island. Today (Thursday) it has been tough too but there is a little left out there and that is my bread and butter, I felt real comfortable in that heat.”

Last year's finalist Elliot Paerata – Reid (Piha) continued his drive through to the finals with a heat-winning performance of 12.93 points.

Paerata – Reid finished runner-up in 2018 and third in 2019 showing amazing consistency but the driven 23-year-old surfer will accept nothing short of a win at this event.

Other heat winners included 2019 Junior Champion Caleb Cutmore (Rag) who has moved up to the Open Division and the youngest surfer in the field, 15-year-old Gisborne surfer Finn Vette.

Vette was back in action several heats later in the Under 18 Boys Division where he also advanced through to the semifinals keeping his hopes alive across three divisions going into the penultimate day of the event.

Vette was joined by Tom Butland (Tara) who surfed to the highest score of the event to date – 15.87 points out of a possible 20.

The Under 18 Girls Division was contested through to the final four surfers. Ava Henderson (Chch) and Leah Wilson (Chch) will meet Georgia Wederell (Mnt) and Amarnie Barber (Aus) in the final, all four surfers having to battle though two rounds in the tough conditions on Thursday.

Action will take place from 8am Friday, with confirmation of venue and order of events to be confirmed at 7am. The likely venue will be St Clair Beach.