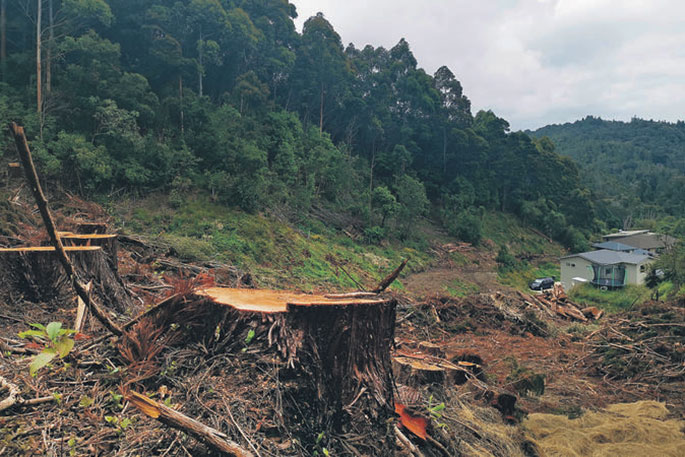 Close to 50 of 25-30m-high trees were removed from council reserve between White Horse and Melville Drives at the bequest of just one resident. Photo: Charlotte Jones / LDR.

Residents of a Whakatāne suburb are fuming after a stand of trees, a home to nesting kiwi, was felled without public consultation.

Close to 50 Japanese cedar have been cut down in the public reserve between Melville and White Horse drives in Mokorua to the dismay of kiwi watchers and nearby residents.

It's understood a single resident arranged the felling of the trees, which were each between 25 and 30 metres high and over 40 years old, after receiving verbal permission over the telephone from the Whakatāne District Council.

Residents who have become used to the sound of kiwi in their backyards and have enjoyed the trees for many years are upset at what they see as one resident's "selfish intent" being prioritised above the rest of the neighbourhood.

They are also questioning what process the council followed when approving the tree felling and why they, as affected neighbours, were not consulted.

Melville Drive residents Ron Price and Helen Dobbin both say they had heard kiwi in the reserve for years and often the birds would come onto their lawns "right to their back doors".

Ron questions how one resident, new to the area, could change the neighbourhood so drastically over the wishes of those who had been living there for years.

Both residents are disappointed there has been no consultation.

"They were a stand of beautiful trees. While they are not native trees, I was surprised that such a big stand of trees could be felled without the council speaking to neighbours first," says Helen..

"We've been here for 16 years and my boys have played in those trees and made huts in those trees. All the kids from the neighbourhood used to play in there for hours. They are more than just trees."

She says the neighbourhood was home to not only kiwi but several other native birds including tūī and kererū and there is a strong possibility that the trees were home to these birds as well.

"It was all done solely for the benefit of one resident, not for a community benefit," she says.

"It's just such an absolute, irresponsible act as far as I'm concerned."

She says the council didn't have the right to make that decision on its own as it related to a communal piece of land.

"A reserve is part of the Whakatāne community, it's not for the council or for one person to decide. Trees are trees, and they don't always have to be native to be worthwhile and to be a beautiful tree." 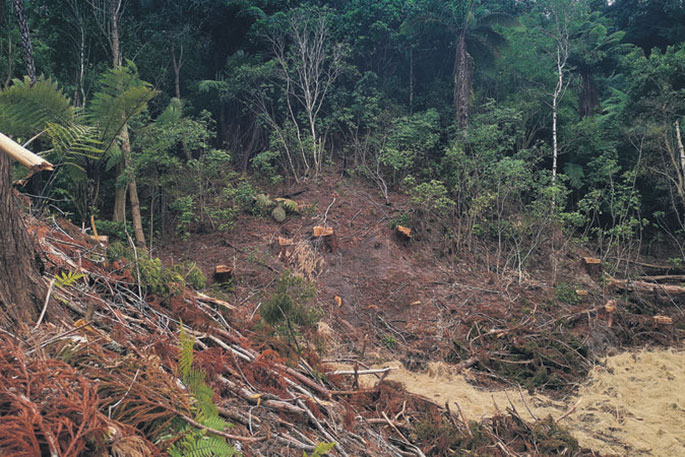 The area where the trees were felled is the home of one of the Whakātane Kiwi Trust’s best kiwi dads and his female partner. Photo: Charlotte Jones / LDR

Whakatāne Kiwi Trust kiwi management team leader Bridget Palmer says the trees made up part of the territory of one of their most successful and famous kiwi fathers, Marie, and his female partner.

Marie's first clutch of eggs this season was "very close" to where the trees were felled. The chick from this nest was one of the only chicks not affected by predators this season and is now living near Foxglove Drive.

"Luckily, his second clutch of this season is further up the valley, thank goodness, because it could have been a different story," says Bridget.

She says Marie is a "really good community engagement tool" and is often spotted and heard by members of the community.

"For anything to happen to him, or to any of our birds, would be really devastating."

Kiwi are very territorial, but Bridget says Marie shouldn't be put off by the tree felling, as research showed kiwi did return to areas where this activity had taken place.

The trust's cameras have shown Marie has remained on his egg, which they expect to hatch within the fortnight.

Bridget says the trust did not monitor Marie's female partner, as it's the males who cared for the eggs and the chicks, so she was unsure of her whereabouts.

However, she believes she would have left the area when the tree felling began.

The trust won't know for sure if the female kiwi is okay until March/April when they will be listening for calls between the two.

"Marie is a very special bird, I don't know what it is about him as Mokorua still has cats and stoats but this will be his third clutch that has been successful, whereas other nests in Kōhī Point and Ōhope haven't been so lucky this season."

Whakatāne district councillor and chairman of the Whakātane Kiwi Trust John Pullar says this situation highlighted the need for communication, care and caution when council staff approved activity like this.

"We need that awareness from the council and the public that there are kiwi in our backyards," says John.

"Whakatāne is one of the only places in New Zealand that kiwi are that close, are in unfenced habitat and are free to roam."

Council group manager community services Mike Naude says although the kiwi trust and other partners were contacted at the start of the felling operation, earlier notice would have been better practice.

Mike says the residents responsible for the tree felling approached the council with safety and shading concerns regarding the stand of trees.

"Council considers these matters on a case-by-case basis.

"On this occasion, a decision was made to approve the tree felling for a number of reasons including improving safety, because it was deemed the felling would have minimal visual or other impacts on nearby properties, the work would eliminate the potential requirement for council to manage even larger trees in future at ratepayer expense, it would be carried out by a professional tree harvesting contractor at the property owner's expense and mitigation work would take place afterwards."

Mike says erosion control measures are now being implemented in consultation with the Bay of Plenty Regional Council and the area will be planted in native vegetation at the beginning of the next season, with assistance from the owners.

"To date the owners have cleared a number of pest plant species around the boundary and undertaken a planting programme of kānuka and other native species."

The property owners declined to comment on the tree felling.

Resource consent was not required for removal of the trees.

We’re on an acre in town with a mix of exotics and native trees that are around 40 yrs old. We have a lot of native birdlife (tui’s, wood pigeons, a resident morepork (ironic!). We’ve also had kaka, fantails plus the usual blackbirds etc. They all use both the exotics and the natives for food, shade, nesting etc. I also couldn’t believe this article plus what’s going on in Auckland where protesters are trying to save a lot of exotics from the chainsaw, to be totally replaced by natives. I get the sentiment, but actually, there is no need for the type of vandalism that we’re starting to see when I know these trees can co-exist. I still can’t believe council acted on only one residents complaint (verbal), for such a big job, perhaps it warrants further investigation.

Arising from a mis-informed and misguided sense of nationalism; "only native trees are of value". ALL trees are valuable given the current state of the Earth, and careful thought should be given to the cutting down of any tree. The same nonsense is going on elsewhere throughout the country and it is caused by the same misplaced ideas that propagate Racism. The trees are here, they enhance the environment, and, at least in this case, it was a disaster to cut them down. If you REALLY care about our country, change your mind about making negative, destructive, statements with token gestures like this. It is stupid and sad.