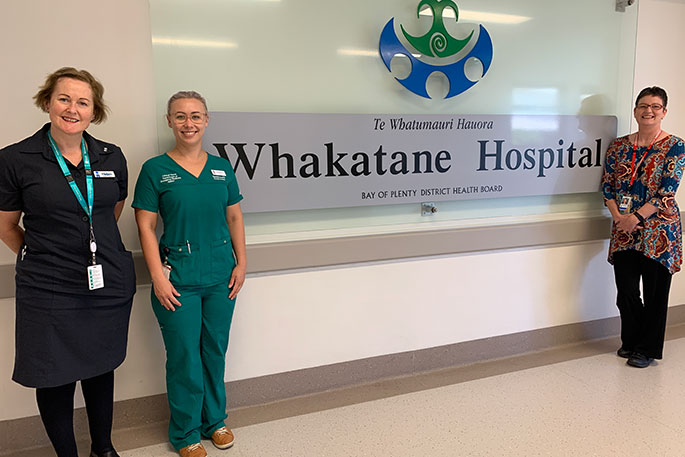 Six Australian and one Kiwi nurse have been thanked for their selflessness and kindness for travelling to Whakatāne Hospital at short notice and helping out following the fatal Whakaari/White Island eruption.

The nurses from Queensland, Western Australia, Tasmania and Southland all arrived in Whakatāne shortly after Christmas.

They are typically staying for around two weeks and have been working rostered shifts within that time.

Bay of Plenty District Health Board Interim Chief Executive Simon Everitt is appreciative for all of the nurses for dropping everything to help.

He says their assistance meant some staff members who had been caught up in the White Island event had been able to get much-needed support over the busy holiday period.

“I want to express our heartfelt gratitude on behalf of the Bay of Plenty DHB and Whakatane Hospital staff.

“I know all the nurses have been warmly welcomed and their work has been highly valued.’

“With regard to the Australian nurses we greatly appreciate our friends from Australia helping us out in a time of need, especially in the face of the emerging situation with the bushfires there.

"That these nurses still wanted to come and help is a testament to them and their goodwill.”

“We were approached by the Ministry of Health about what support needs we might have around things such as staffing,” says Simon.

“A lot of people did a lot of work very quickly in order to make it happen.

“This included the NCCTRC, the Ministry of Health, the Nursing Council, and our own DHB team, who coordinated the local resourcing and organised accommodation, transport and other logistics. The fact it all came together so quickly and efficiently was a great reflection of manaakitanga and our own CARE values.”

Whakatāne Hospital Coordinator David van Dijk echoes the message of thanks and is fulsome in his assessment of the nurses.

“Their attitude has been phenomenal, they have given 100 per cent from the moment they arrived. They hit the ground running as soon as they were introduced to the hospital.

"They’ve been so flexible and accommodating with their shift patterns, being so willing to work when we’ve asked them to work. They really just wanted to get stuck in and they’ve fitted in with the teams brilliantly.

“They also bring a wealth of knowledge and experience with them and we’ve utilised this a lot in ED (Emergency Department) and ACU (Acute Care Unit).

“I think overall the staff here feel deeply appreciative of the fact that these nurses have come to our assistance at a time of need. It’s been a very positive experience following on from a very sad one of course.”

Clinical Nurse Consultant Madelaine ‘Maddie’ Hooper is one of those who volunteered.

She says she had no hesitation when staff at her workplace, The Royal Brisbane Hospital, were asked if they could help out.

“I remember seeing the reports of the White Island eruption on the news,” says Maddie. “I was quite upset to hear about it and so when they asked if anyone would be interested in going to help out I put my hand up straight away.

“I’ve worked at Christchurch Hospital as well for a couple of years so I had this intense feeling of “Oh no, New Zealand”. And my godmother’s family is actually from the Whakatāne area so, although I’m an Aussie, I do feel a connection to New Zealand.”

Maddie found out she had been selected on Christmas Eve and was then put on standby to be ready to leave from December 27 onwards.

She arrived in Whakatāne on December 30.

Back home in Brisbane, Maddie works in a critical care outreach position. She has a Masters in Traumatology and throughout her 10-year career has specialised in emergency, intensive and trauma care.

“I’ve been based largely in ACU here but have also done a couple of shifts in ED,” she says. “It’s actually been an amazing experience for me and I’m just so happy to have been able to come and help out.

“We’ve had such a warm welcome and reception from everyone; from the staff here, the people at the accommodation where we’re staying, to locals, everyone’s been so generous and so grateful that we’re here. It’s been spectacular really.”

The Royal Brisbane Hospital is Queensland’s second biggest hospital, with around 800 beds.

“It’s definitely very different to Whakatāne, but I have worked in clinics in smaller more rural locations before such as the Torres Strait. So I have experienced both ends of the spectrum.”

Maddie will return to Australia on January 13 and says she has also made plenty of friends whilst in New Zealand.

“All the Aussies are staying together, so we’ve been exploring the local restaurants in the evening, it’s been good. It’s certainly brought a group of six Australian nurses close together.

“Three of us had actually worked in the same area back home and never met before. Now we’ll go back to Brisbane knowing each other.”