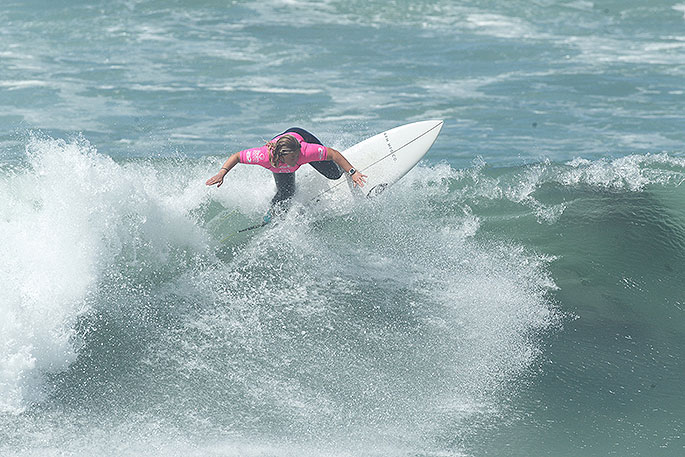 On a big day of surfing in 1.0m – 1.5m waves and strong onshore winds, the two surfers advanced to the semifinals and quarterfinals respectively.

Brown posted a 10 point heat total out of a possible 20 to advance alongside Zhana Hutchieson (Tara). The two surfers eliminated one of the pre-event favourites in Elin Tawharu (Mnt) who unsuccessfully battled away against the elements finishing third.

“I was happy with my performance today considering the conditions,” says Brown, who is tasting the waves of Dunedin for the first time.

“I haven’t been feeling well the last couple of days and was sick this morning before my heat so it is good to get it out of the way and have a couple of days free to recover."

Brown says she didn't feel any increased pressure as defending champion this year.

“Last year, my win was unexpected and I think this year at Nationals feels no different, it is the same as any other event I attend, I just need to go about my heats in the right way and put in good performances."

Pascoe stole the heat win from Ensor in the dying seconds with a nicely surfed lefthander into the corner of St Clair Beach.

The two surfers represent a big push from the teenagers with over three-quarters of athletes in the Open Women’s Division under the age of 20.

In the Open Men’s Division, Stairmand made easy work of his heat win with a 12.83 point total to advance alongside Tom Robinson (Whngrei).

However, it was another Raglan surfer in Caleb Cutmore that took the highest heat score honours of the day with a 13.37 point heat total. All up, four Raglan surfers advanced including Taylor Hutchison and Josef Jungwirth.

Dunedin will now pin their title hopes on Elliott Brown after he was the only local surfer to advance out of the second round and into the quarterfinals.

Five of his compatriots were eliminated today but Brown took a comfortable progression behind Whakatane surfer Jack Lee.

Lee was back in action in the afternoon contesting the Under 18 Boys Division where he tasted more success again advancing to the quarterfinals.

The 2019 SNZ Grom Series runner-up will be aiming to top the season in 2020 and gain selection into the New Zealand Junior Surfing Team.

Gisborne’s Finn Vette top scored for the juniors posting 13.3 points in his heat. Vette has a big week ahead contesting three divisions including his favoured Under 16 Boys Division.

Taylor O’Leary (Mur), Tom Robinson (Whngrei), Navryn Malone (Rag) and Jayden Willoughby (Rag) all advanced to the quarterfinals with impressive performances and have afforded themselves a day off on Wednesday.

The surf is expected to drop further for Wednesday with favourable early morning winds tending northerly in the afternoon.

The Open Men and Women will have a lay day. The final day of the event on Saturday will be streamed live via the Sky Sport Next YouTube channel.

Action will take place from 8am on Wednesday morning with confirmation of venue and order of events to be confirmed at 7am. The likely venue will be St Clair Beach.