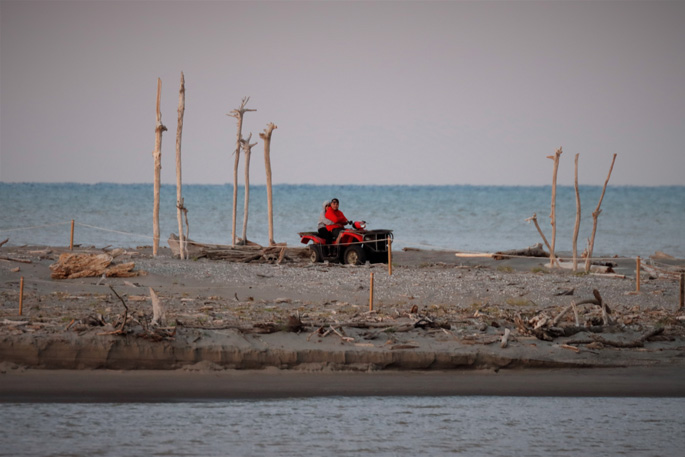 A person was pulled from the water near the Whakatane River mount in critical condition on Tuesday afternoon. Photo: Daniel Hines/SunLive.

A rāhui (temporary ritual prohibition) has been placed over a Bay of Plenty river following a drowning.

Emergency services were called to the Whakatane River mouth after a person was pulled from the water in critical condition shortly after 2pm on Tuesday.

A police spokesperson says medical attention was administered but the person died at the scene.

In a media release, Ngāti Awa spiritual leaders and kaumātua say they have placed a rāhui over the river as a result of the death.

“Ngāti Awa kaumātua attended the scene with the deceased, the whānau pani (bereaved family), and the rāhui karakia (prayers) were held at 5pm on Tuesday.

“To respect the rāhui, people are asked not to gather seafood, catch fish, and undertake water activities in the Whakatāne River from Turuturu Roimata (Statue Rock near river mouth) to Taneatua until the rāhui is lifted at 5am on Friday.”

Ngāti Awa tōhunga and kaumātua ask that the two-day rāhui is respected to acknowledge the tragic event, the deceased and the whānau pani.

“Before undertaking activities on the Whakatāne River during the rāhui, Ngāti Awa tōhunga and kaumātua ask that people reflect on the absolute tragedy of losing a loved one so suddenly, the suffering of the whānau pani at this very difficult time, and the length of the rāhui.

“We extend our sincere and heartfelt condolences to the whānau pani who are left grieving and heartbroken as a result of this afternoon’s tragic events.”