Black Falcons to take to the sky 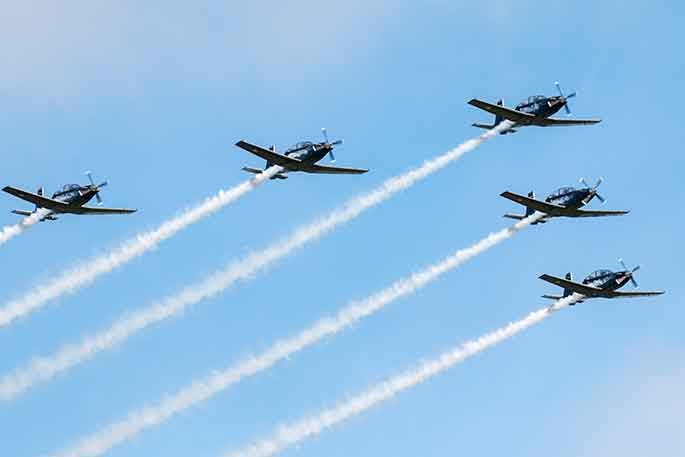 The annual Classics of the Sky Airshow will take place on January 18, after the RNAF Black Falcons perform a special display on January 17. Photo: Bruce Barnard/SunLive.

The skies over Tauranga will be treated to a one-off aerial display as the Royal New Zealand Air Force Black Falcons take to the air on January 17.

“These guys will perform their world class aerobatic routine over Main Beach on Friday evening ahead of their Saturday afternoon Classics of the Sky Airshow display,” says the organisers of the airshow.

Introduced to the RNZAF as their new pilot trainer in 2016 and named after the KAREAREA (New Zealand’s native Black Falcon), these T6 TEXAN aircraft boast the most modern of military pilot training technology.

Pressurised cockpits – with a capability of operating at 30,000 feet, collision and terrain avoidance systems, individual pilot locator beacons and of course ejection seats make them a state of the art military trainer designed to train any military pilot to very high capability levels.

“The falcons are the specially trained display team who in many cases are instructors and pilots from other facets of our Airforce, and who also provide a front line public presence with their team display.”

People are being encouraged to get down to Mount Main Beach or head up to the Mount on Friday, January 17, at 6pm to catch the one-off aerial display.

Classics of the Sky

The show will feature a celebrity race truck driver, racing a chopper -180+ big rigs on display, aerobatic displays, a fire-fight and even a bit of comedy.

“Get in in early on Saturday afternoon to find a good parking spot on the airfield and bring your deck chair.”

Gates open at 1.30pm. Tickets available at the gates or on Eventfinda.