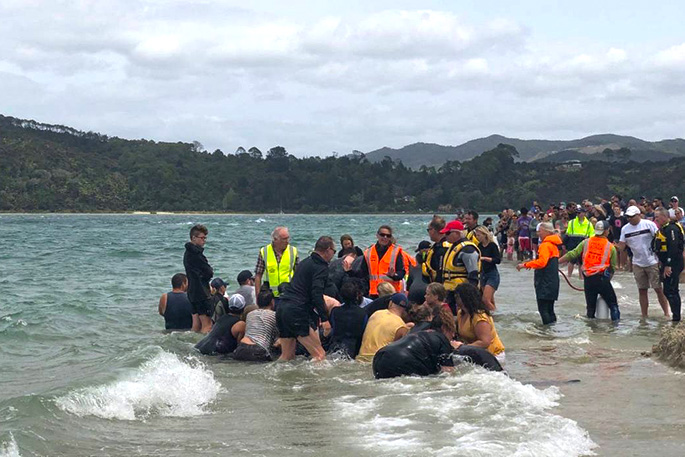 Volunteers helping to refloat the pod of whales stranded on the Spit at Matarangi Beach. Photo: Leigh-Ann Wiig.

Kirk Davis from JetFish TV filmed the successful refloat of the seven surviving whales after 11 stranded at Matarangi Spit on the Coromandel today.

Over 1000 people gathered to help save the whales, digging trenches and continually pouring water over them until high tide around 2.30pm provided the opportunity to float the whales off back into the ocean.

"I headed down there [to Matarangi] with the Waverunner and ran a hose off the live bait set up I have to keep one of them cool for a few hours before we could float them," says Kirk.

"The first one to be floated was a baby one which I looked after for a while while the others got in the water. Then when they all came together we herded them into a pod and safely out of the harbour!"

Seven whales that survived a stranding on the Coromandel have been refloated, but attempts are ongoing to move them out of an estuary.

The pod became stuck at Matarangi Spit on Saturday and 1000 people, including locals and Department of Conservation staff have been working for hours to rescue them.

Four whales have died. Two calves were among the group, one of which is also among the deceased. 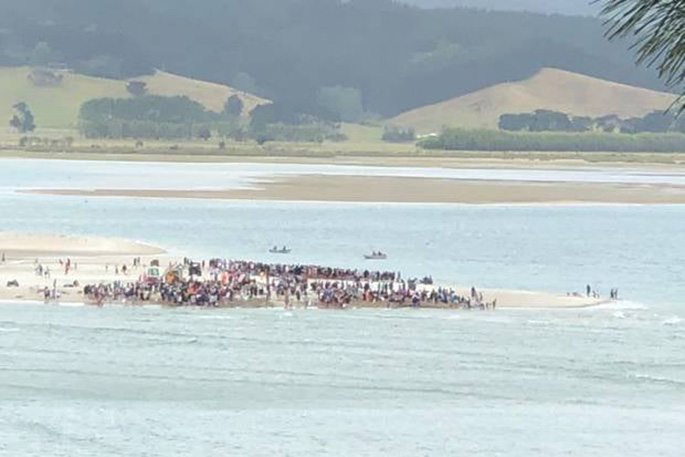 The whales stranded on the Spit at Matarangi, with over 1000 people turning out to help refloat them.  Photo: Project Jonah

As high tide approached around 2.30pm, the seven surviving whales were successfully refloated

The police, rural fire brigade members and harbourmaster have also been on site assisting with managing the event and the large number of people. 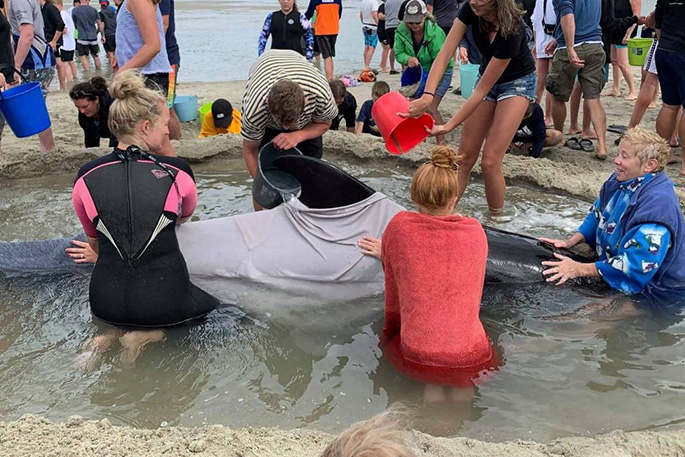 The Matarangi Volunteer Fire Brigade have thanked the local community for their help with the pilot whales.

“THANK YOU ALL FOR UR HELP TODAY - we are currently working with DOC and all whales have been refloated and are being watched in the harbour,” writes a spokesperson on the Matarangi Volunteer Fire Brigade Facebook page.

“If we do require more help - if they do re-strand themselves we will send an SOS - If you do want to come down and help if we need it, please be aware the at you will need a wetsuit and a life jacket.

“We need to be aware of safety of others,” says the spokesperson on Facebook. “Please make sure you are listening to those in charge as they have been given a job to do.

The volunteer fire brigade also report that a lot of gear left at the beach will be taken to the Matarangi Volunteer Fire Station, where it can be collected by owners. 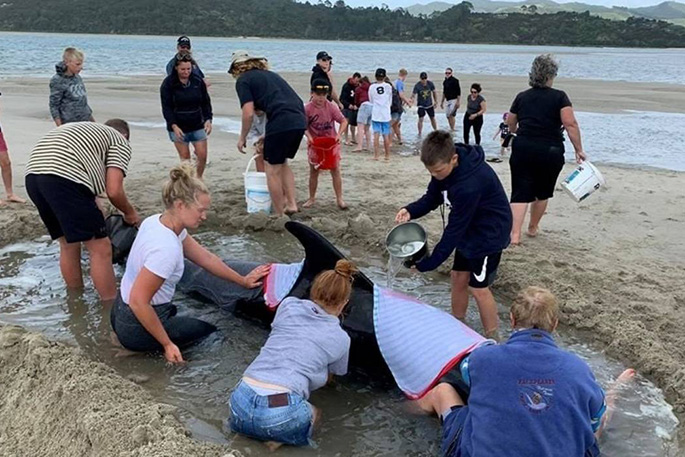 Update, 12.30pm Department of Conservation staff are requesting that no more people come and help to refloat the pod of pilot whales stranded at Matarangi Spit, on the Coromandel, as there are now over 1000 people assisting.

A Department of Conservation spokesperson confirmed four of the whales have died, while seven remain alive.

Two calves were among the group, one of which is also among the deceased.

"We do not need more people to assist with the whales. We have plenty of help which we appreciate." 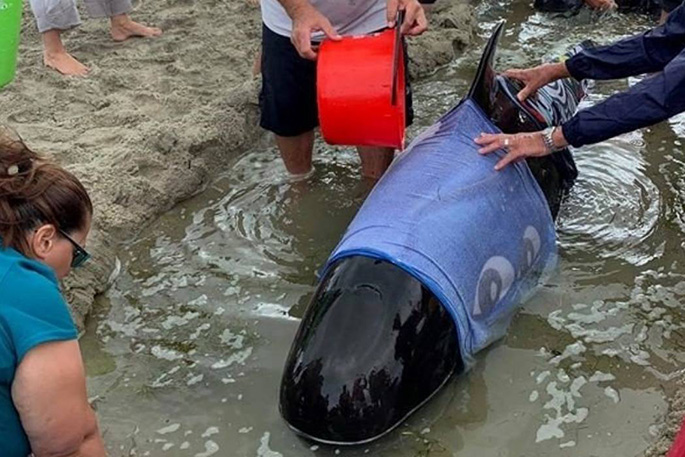 The police, rural fire brigade members and harbourmaster are on site also assisting with managing the event and large number of people.

"DOC staff are leading the stranding response and there are around 1000 people who've come to help with the whales," says the spokesperson from DOC. 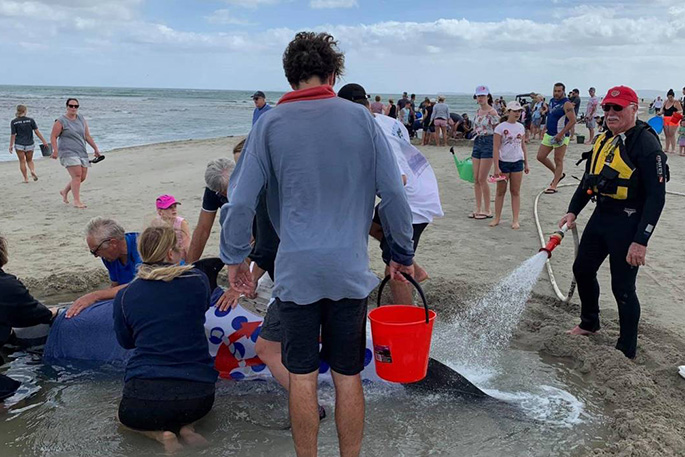 An attempt to refloat the surviving whales will be made early this afternoon in the incoming tide, which is due to reach high tide around 2.30pm.

"At the moment the surviving whales are being cared for on the sand by volunteers who are keeping them comfortable, covering them with sheets with buckets of seawater being gently poured over them to help protect their skin from drying and to keep them cool." 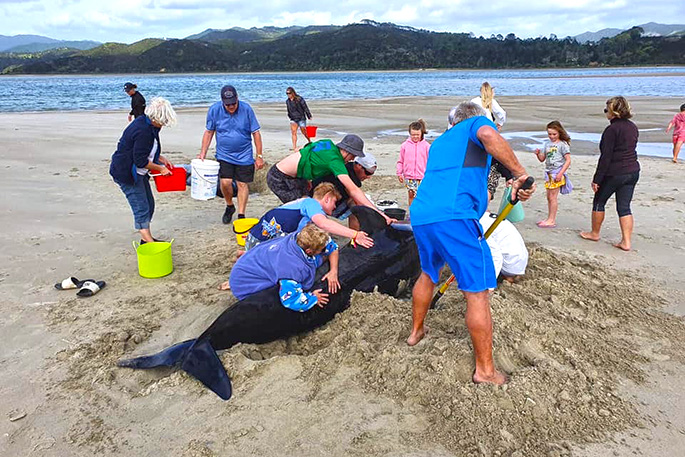 Coromandel’s More FM are calling for helpers to assist with a multiple whale stranding at the Spit, Matarangi Beach.

The pod of whales stranded at Matarangi this morning and three have already died.

“If you can help please come along, they need numbers, we've lost one whale already, if you have a digger that would be amazing, otherwise bring buckets, shovels, anything to help,” writes a spokesperson on the Coromandel’s More FM Facebook page. Since the post, another two whales died. 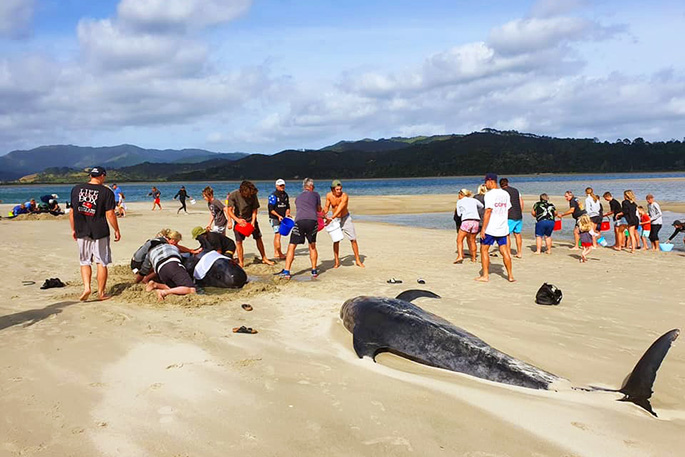 Three whales have already died. Volunteers are helping to save the remaining pilot whales stranded on the Spit at Matarangi Beach. Photo: David Campbell.

They report that the Matarangi Volunteer Fire Brigade is on site as well as around 50 volunteers, with many more on their way after the Facebook post was shared multiple times.

People are replying to the online message from Whitianga and around the Coromandel, with some coming with their diggers to help with refloating the whales. 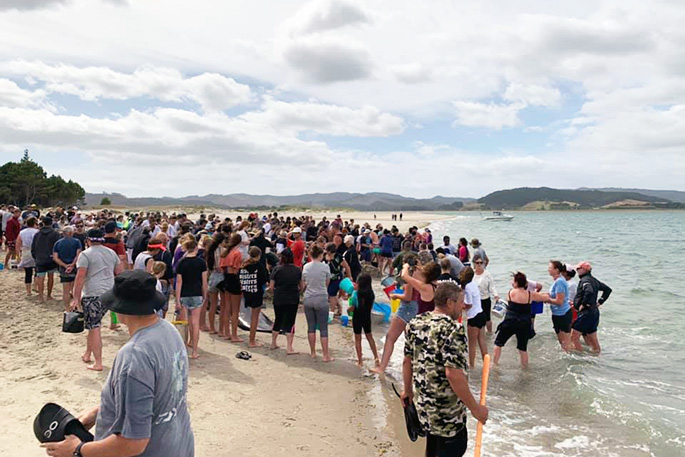 Well done to everyone involved and thank you. T.E.A.M - Together Everyone Achieves More.