A journey back from the brink 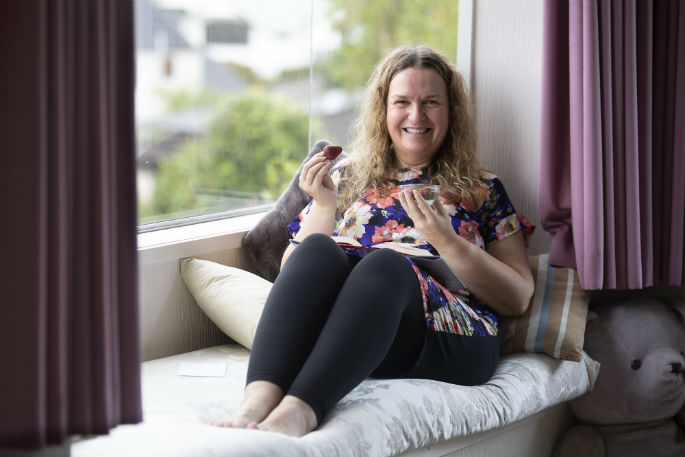 Favourite foods keep on coming thanks to a doting husband.

If the Tinetti household had its way, November would only have 29 days  - the 22nd would be struck from the Gregorian calendar. And with good cause.

Because 20 years ago on November 22, 1999 Dave Tinetti had a stem cell transplant for non-Hodgkin lymphoma.

“So I thought because he’s had cancer it’s something that won’t hit me,” says Dave’s wife, Tauranga list MP, Jan Tinetti.

But cancer is cruel and indiscriminate. And 20 years to the day, on November 22 last year, Jan Tinetti had a mastectomy after the discovery of a 13cm tumour in her right breast. “It’s a big day for us. And so if we can get by November 22 each year, we are doing okay.”

The politician is a walking advertisement for mammograms.

“I self-examine and had no lumps.” So she was relaxed about going for a routine mammogram.

“But then a week later her calm was shattered. It was a phone call from the breast care clinic, and there was mention of ‘irregularities’ and then a ‘recall’. They needed to do an ultrasound and possibly a needle biopsy.”

“So, I had done all the right things.”

It was during the needle biopsy that husband Dave broached the dreaded ‘C’ word.

“He said: ‘what are we actually dealing with here? Because no-one had said. Is it cancer?’” A straight question demanded a straight answer. “The doctor said he would be very surprised if it wasn’t cancer.”

He wouldn’t be surprised.

“It was quite prolific, 13cm. In the duct but contained, not invasive.”

But the only way of dealing with it was a mastectomy. And within two weeks, on the dreaded November 22, Jan Tinetti was admitted to Grace Hospital.

“Wow!” says a wide-eyed MP. “I thought only other people had to deal with these things.”

And there were other thoughts, the sort of thoughts women have when they are well.

“What would I feel like if I lost a breast? I am aware that for some women that's a really big thing. But not for me, really isn't. I really don't feel any affinity there whatsoever. It’s different for different people.”

But Jan just wanted the cancer gone. And if that meant sacrificing a breast, then so be it.

Jan is now six weeks into recovery. She’s at home, barefoot, swishing around in an A-line and thumbing through the ‘Bible’ – Michelle Duff’s ‘Jacinda Adern: The story behind an extraordinary leader.’

At precisely 3.30pm on Monday, December 9, Jan Tinetti texted the Prime Minister to say she had just seen her surgeons and she would not need further treatment, no chemo, no radiotherapy, and she would be back at work in January.

“She texted straight back to say fantastic news, really delighted, that’s the best news – something like that.”

The MP had been unaware of the catastrophe unfolding on Whakaari/White Island that day. But later she was in awe of the boss taking valuable moments away from managing a national tragedy to connect with an MP managing her own crisis.

“She found time for me. She’s incredible.”

“Dave was around when I said they were my favourites and so the cherries, strawberries and apricots haven’t stopped. I chose very well 28 years ago.”

And through the MP’s brush with a potentially fatal disease, she has learned a little about herself.

“I know you won’t print this, but it turns out my breasts are a lot bigger than I thought they were. And all these years I have been wearing the wrong sized bra.” Good can come from a crisis.

A picture is worth a thousand words so the MP hauls her dress tight around her chest to prove she is ‘lopsided’.

She’s right. So she will have another reconstruction on the other side to address the imbalance.

And when eye contact has been respectfully re-engaged, the MP returns to her over-riding message.

“I know mammograms aren't fail safe. But hey, it's the best we've got at this point in time. And I will be out there advocating for women to go get one because I hear so many women saying: 'I hate getting those done’. But it beats the alternative.

And she believes her experience is a lesson to us all.

There’s a collage on Jan’s living room wall – it is covered with photos of her kids at Merivale Primary.

“Sending out aroha and hugs while you heal. Tamariki.” And “Kia kaha, keeping going. Merivale kids miss you.”

That’s medicine that can’t be prescribed.

So why is there no free screening once you turn 70. We still have breasts, they don’t disappear at age 70. You are in a position to make positive changes for all women