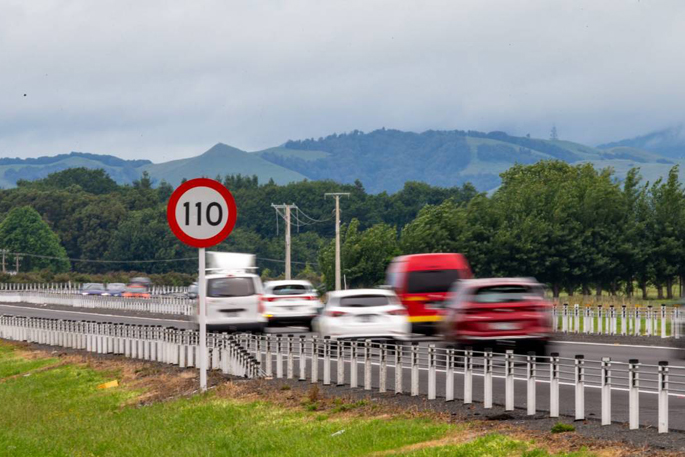 There have been no serious or fatal on either 110km pieces of state highway in the Waikato and Bay of Plenty. Image: Tom Lee/Stuff.co.nz

Two of the country's fastest roads are actually saving lives.

No one has died on either the Cambridge section of the Waikato Expressway, or the SH2 Tauranga Eastern Link Toll Road, since they opened just over two years ago, figures released to Stuff show.

Waikato Road Policing Team Leader Rupert Friend says he wasn't surprised by the lack of crashes because roads rated at 110kmh were required to have side and median barriers.

"From a road policing perspective if we could build 80,000 km of the road like that in New Zealand I would be a happy camper," he says.

The increased speed limit of 110kmh was implemented on December 11, 2017, on both sections of road.

Since then, until October 2019, there have been no fatal crashes at all on the Cambridge section, between Tamahere and Karapiro, with one serious crash, two minor crashes, 17 non-injury crashes reported.

On the Tauranga Eastern Link Toll Road - there have been three crashes reported - with one being minor injuries and the other two were non-injury crashes.

The type of vehicles involved in those crashes have largely been cars, vans and SUVs.

Rupert says the Cambridge section was "about as safe an engineered road we can have".

"Because if something goes wrong everybody is going in the same direction and therefore it's highly unlikely that anybody is going to come to an absolute sudden stop which is where the deaths happen.

"It's the rate of deceleration that kills people whether that is hitting a concrete wall, a truck, a car coming the other way or a tree that expressway excludes you to get to anything like that."

He says the wire barriers were designed to bounce you back onto the road after absorbing a lot of the energy, therefore slowing you down.

While he'd love to see all roads in New Zealand designed in the same way, he acknowledged that wasn't possible.

"But it's physically not going to happen, so the risk is around our roads on which people are separated by a narrow white line and they're doing 100kmh that is where the speed is more concerning."

He says that deviating by five or 10 kilometres on 110km doesn't have a lot of impact whereas speeding on a road with no median barrier like on SH1, after the Expressway ends at Karapiro, was hugely dangerous.

It also means officers can focus resource on the more dangerous pieces of road.

"Our three highest risk roads in the district and our top priority are SH1 Karapiro, the triangle at Matamata which is SH29, SH27 and SH24 and SH25 to SH25a up and over the Kopu Hikuai - so our highways staff are told that it's non-negotiable you will be there every day."

Crashes had also deceased on the Expressway from Te Rapa to Taupiri. Although it's not engineered to the same level as the other two roads, as it doesn't have a left-hand barrier the entire way.

"I think we've had one serious injury but it has dramatically reduced from what it was."

He believes the finished Huntly section will also see a reduction in serious crashes.

"That Huntly stretch is one of our most dangerous roads around."

An NZTA spokesperson says the speed limit would only be increased to 110kmh on roads which could support higher travel speeds without compromising safety.

That included having standards such as two lanes in each direction, a median barrier, no significant curves, and no direct access to neighbouring properties.

"At present only a few state highways are likely to meet these standards."

The 110 km/h speed limit requires separate approval and bylaw. The decision on making a 110 kmh speed limit bylaw lies with the relevant road controlling authority along with consultation.

For the consultation of the SH1 and SH2 sections to be increased to 110km NZTA received almost 11,500 submissions from the public and stakeholders with 73 percent of the submissions in favour of increasing the speed limit on the two roads.

If you are "whipping along" a SH and cannot stop when encountering Grandpa round the corner, then you are NOT driving according to the conditions and your speed was inappropriate for that road. "Never drive so fast that you cannot stop WELL WITHIN the distance you can see to be clear." (UK Road Code, rule 59...but so fundamental I believe it is universally applicable and apply it when driving.)) Speed (too fast OR too slow) is NOT the problem; it is the inability of many drivers to APPLY the correct speed for the conditions that makes our roads dangerous.

Speed matters when your whipping along a SH come around a corner and grandpa in front is doing 50 which is a common scenario between Tauranga and Katikati, and Tauranga to Te Puke

People are so dependent on their electronic brain replacement these days that they forget to apply common sense. Apart from the fact that they cannot spell,think, calculate or remember anything without their smartphone. They look at Google Maps when they plan a trip, probably at 8pm..Then leave the next day and expect to get where they are going in the time frame they read 12 hours earlier...the map says you should be there at "X" pm, ( which is calculated at about average 90kph) and that is the gospel...all of them trying to keep up with a figure calculated in California....Dumb and dumber. I have even heard people saying "I beat the Google Maps ETA " Drivers need to allow at least 10% extra time to travel than the minimum time they think it should take.

So right Morepork,its not the speed that causes accidents,its the drivers attention.When driving faster you concentate more on your driving,crawling along SH2 gets so boring driver spend their attention looking at the scenery.When on SH2 on your way to AKL you have a purpose you just want to get there.When the AKL Southern Mwy gets completed with 3 lanes slow traffic needs to be ticketed for holding up traffic,and it should be banned to heavy traffic.This road is meant to improve traffic flow.Make it happen

Better roads is part of the answer to reducing road toll

Supports the argument that the roads are the problem. Bad roads leads to risk taking which leads to crashes. Human nature needs to be taken taken into account when designing roads.

All the more reason why Tauranga/Katikati highway should be upgraded to 4 lanes.

This supports the argument...

...that speed, in and of itself, is not the problem. It is speed NOT suited to the conditions, which is dangerous. Unfortunately, Human factors like impatience and pressure to be somewhere lead to excessive speed on roads that can’t support it. I wonder also if the fact that everyone knows these are high speed roads leads to people paying more attention and taking better care...