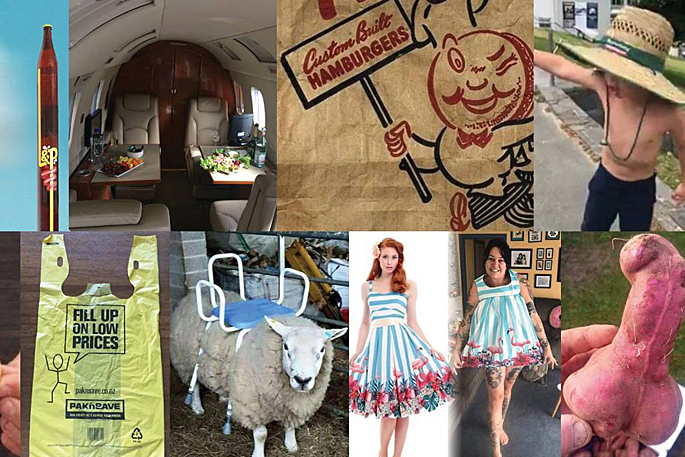 Move over Stephen Colbert, a straw hat that "may or may not" have belonged to the infamous British family who toured New Zealand last year causing mayhem was the most popular item sold on Trade Me this year.

The British group of holidaymakers made global headlines after leaving rubbish strewn across Takapuna Beach in January.

This was quickly followed by a whirlwind of rudeness, toast and shoe throwing, the theft of a Christmas tree from a petrol station, court appearances, links to a roof scam and leaving a motel room "smelling like poo".

And the price of piece of memorabilia from the group's epic journey? Suitably pricey – the Bunnings Warehouse hat identical to that worn by the youngest member of the infamous "unruly" British clan sold for $1000.

Trade Me's Logan Mudge says all proceeds of the hat were donated to Mercy Hospice.

"The straw hat had a staggering 192,000 views and the hilarious description warned prospective buyers that the seller "cannot be responsible for any obscenities that may flow from your mouth," Hodge says.

The second most popular item was a fancy private jet with luxurious leather recliners that could be transformed into accommodation or a café according to the seller, had 96,000 views.

A 'veraciously virile kumara' had 88,000 views and came in third on the list while a 'penis-shaped potato' was number seven with 57,000 views.

Both listings raised money for the Prostate Cancer Foundation.

The auction's tongue-in-cheek description claimed the item was 'more endangered and at risk than many native species' and the listing fetched 82,000 views.

A 60-year-old used McDonald's burger bag from the same year the fast food company was founded also made it in the top 10.

Rounding out the top ten was the world's tallest L&P bottle, the full set of iconic Big Fresh characters, an online shopping purchase that went wrong, and a "ride on lawn mower" (a sheep with a chair on its back).

The top 10 Trade Me listings of the year