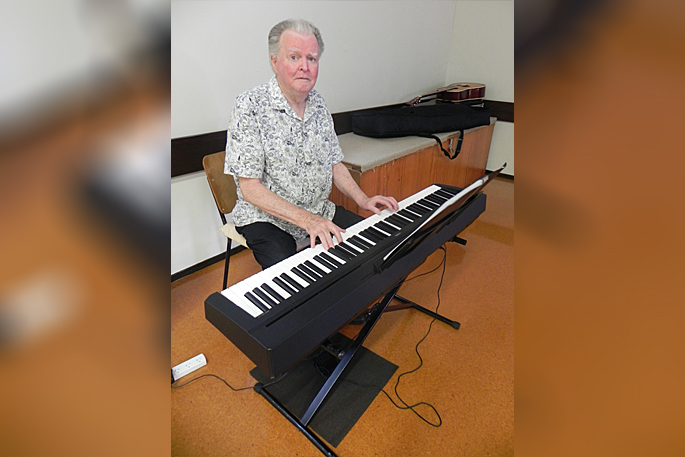 Fred Chell has been the Brainwave Singers’ pianist for the last seven years. Supplied image.

A ‘pianist extraordinaire’ is how a volunteer musician is being described as he steps down from his regular gig.

Fred Chell has been faithfully tickling the ivories for the last seven years as the volunteer pianist with therapeutic choir group the Brainwave Singers.

“It’s been a pleasure, they’re a great bunch,” says 77 year-old Fred. “They’re here rain, hail or shine, they’re very loyal. But age is catching up on me. I rely on my memory to play well and that’s starting to fail a bit so it’s getting harder.”

The Bay of Plenty District Health Board’s Brainwave Singers is a special choir which uses singing to improve speech and communication in aphasia (stroke) sufferers and to delay neurological conditions like Parkinson’s. Fred says he hoped someone could be found to replace him, as helping people in this way was very fulfilling.

“I hope someone will pick up the reins and run with it. You meet some lovely people and we play gigs towards the end of the year as well, which are always very enjoyable. I’d encourage people just to come along and see what it’s all about.”

A churchgoing friend, whose husband was a member of the Brainwave Singers, introduced Fred to the choir back in 2012.

“I went along to a session and they asked me to play a couple of tunes. That was apparently good enough as they offered me the position,” he laughs.

Fred, a retired computer programmer, took up playing the piano seriously in his early teens.

“My mother used to play piano by ear,” he says. “I asked her one afternoon to teach me, so she sat me down and showed me. I persevered with it and can even remember the first tune I learned, ‘It’s been a blue blue day’.”

“Fred has been ever-present and ever-faithful, year-in, year-out. He’s been wonderful, given very generously of his time and I would like to thank him sincerely on behalf of the choir.

“The way he plays has given the choir energy and driven them along. He’s got a massive repertoire. We have six song lists, 15 songs per list, and he has all of those memorised; incredible really. He’s a pianist extraordinaire. He also very kindly helped me with my PHD research on the effect of choral singing therapy on Parkinson’s. We’re definitely going to miss him.”

“I know it’s going to be hard to find someone of Fred’s calibre and commitment again but it would be great if there is someone out there who feels they could help out.”

Anyone interested in volunteering for the choir’s pianist position can call Robin on 027 326 1464 for more details.