Tauranga athletes taking it to the next level 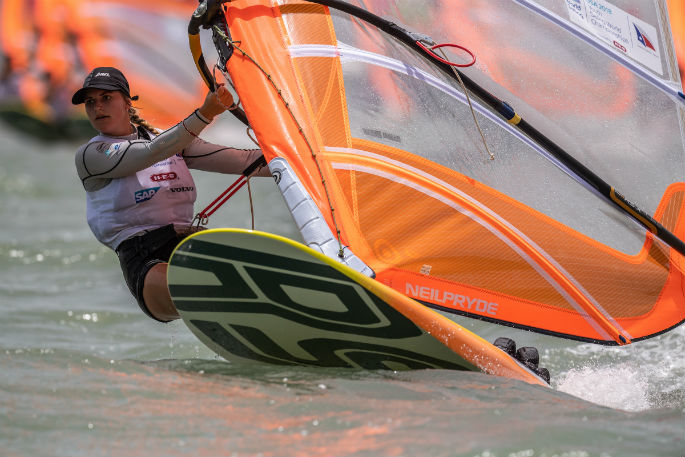 Young windsurfer Veerle Ten Have is training hard, with her eyes set on next year’s Olympic Games in Tokyo.

Teenage Tauranga athletes are hoping that a scholarship of about $1000 will kick start their careers and take them all the way to the 2020 Olympic Games in Tokyo.

It may even take one of those athletes into a full-time career.

“If I get selected to go to Tokyo, then I will definitely be doing it full-time. That’s the goal,” says 18-year-old windsurfer Veerle ten Have.

Veerle and canoe slalomist Jack Egan were recently granted BayTrust Scholarships, alongside 14 other young athletes in the Bay of Plenty.

The scholarship aims to give athletes a leg-up, making it easier for them to test their skills on the world stage.

“They are professional athletes, but they are on the cusp of making something of it,” says Sports Bay of Plenty spokesperson Danene Jones.

And it’s crystal clear that these two teenage athletes want exactly that, with both of them regularly training six days a week and spending more than three months of this year competing in Europe.

Jack placed ninth in the finals at the Junior and Under 23 World Canoe Slalom Championships in Krakow, Poland this year. He’s the first Kiwi to make the finals and place this highly.

The former Aquinas student was also awarded Secondary School Sportsman of the Year at the 2019 Bay of Plenty Sports Awards.

"Being a part of the top 10 in the world, it's a pretty amazing feeling. Hopefully, I get to experience that again."

He says he’s driven by the end goal of competing in Tokyo and has his fingers crossed this year’s Olympic selection will be a success.

Spending more than 13 hours a week training, Jack says it’s been difficult also trying to hold down a summer job. But he reiterates the importance of prioritising his passion.

“Sometimes you just have to sacrifice work for training aye.”

Tokyo 2020 is also at the forefront of Veerle's mind. She's decided to ramp up the training this summer, making the move to Melbourne to prepare for the RS:X Windsurfing World Championships in February.

"The first step is to qualify for New Zealand at World’s in Melbourne, then hopefully I get selected to go to Tokyo."

Dutch-born Veerle, who started windsurfing at 13, says she's motivated by seeing herself improve after each session.

"It's all about having fun, going fast and being the best. I enjoy the racing aspect of it, and just seeing myself get better every time."

It's been a big year of international competitions for Veerle, battling it out in Spain, Italy and Japan.

Currently, she is training six days a week in and out of the water.

"It takes up a lot of my time - six days a week, two trainings a day with one rest day."

Veerle trains with female windsurfers from overseas when she can, or with a coach from Yachting New Zealand during the lead-up to a competition.

“Otherwise, I am out there on the water training solo.”

To fit around the hectic training schedule and international competitions, Veerle has completed the final two years of her schooling by correspondence.

"If I wanted to get serious with my windsurfing, I couldn't go to normal school because I would miss out on too much," she says.

The two scholarship recipients are stoked about the support from BayTrust, saying it will most definitely help ease the financial pressure.

"It's going to help me get over to Melbourne. Competing internationally all adds up, and things like this just take the pressure off massively," says Veerle.

Jack says it's allowed him to spend more hours training and fewer hours working. "I don't have to worry as much about my finances, basically it's meaning I can train harder."

Twenty four sportspeople from a variety of codes received a BayTrust athlete, coach or officials scholarship in the final round for 2019. This year the scholarships ranged from $500 to $1400.