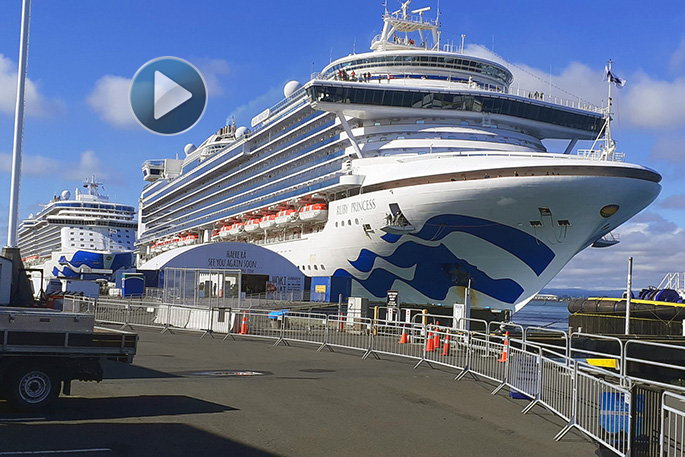 It was either a case of sibling rivalry or musical ‘one-up-ship-ship’ as two cruise ships took to their horns for an epic musical boxing match on Boxing Day.

People lining the beach in Pilot Bay to watch the sister-ships Majestic Princess and Ruby Princess leave the Port of Tauranga were entertained with the musical sunset treat on Thursday evening.

First, the Majestic Princess, with about 4900 crew and passengers aboard, pulled away from its berth, saluting the crowds and the Ruby Princess by playing the theme to the television series ‘Love Boat’ on its horn. It was a little delayed leaving, given the 8pm time originally posted on the Port of Tauranga website, with the Ruby Princess due to leave 15 minutes later at 8.15pm.

Despite potentially holding up the departure time of the second ship, the Majestic Princess wasn’t about to leave without doing its traditional musical send off.  It’s debatable whether a ship horn blast is romantic or not, but on finishing its 30-second melodious blast, it cheekily started a repeat of the tune.

This caught the crowd’s attention, as usually the ship delays playing the ‘Love Boat’ theme a second time until it is nearing the harbour entrance. Possibly the captain had spotted the beach piano in Pilot Bay or was responding to the people waving farewell signs from the deck at the Mount Ocean Sports Club next to Salisbury Wharf. Or perhaps the captain and crew wanted to help bring some Christmas cheer back into the Bay community after the tragic loss of life following the Whakaari/White Island eruption. Or maybe the ship was just experiencing a dose of the happy Tauranga vibe. 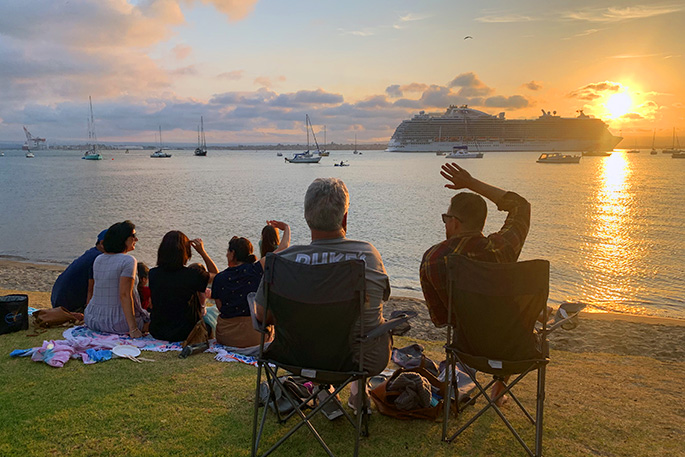 Watching the Majestic Princess sail out of the Port of Tauranga at sunset. Photo: Rosalie Liddle Crawford

Whatever the reason for the melody, once it had finished, the captain of the Ruby Princess blasted a low note back, then repeated it, holding it for about four or five seconds.  Not at all despondent at having only a singular rumbly bass note, it blasted out the same long ‘baaaarp’ one more time. It was almost as if the second ship was telling the first one to stop showing off.

“They were both in Auckland yesterday but silent. I didn’t know they could sing!” said another.

“I can’t see this happening in Auckland,” laughed another. “The NIMBY’s would be wearing out their phone keypads to council and Port of Auckland.”

Completely enraptured by the moment, people were now grinning and laughing along the shore as they watched, wondering what was next.

Clearly enjoying the attempt at competition by its sister ship, the Majestic Princess launched into a third musical blast of the ‘Love Boat’ melody as it slid across the harbour towards the entrance, taking it further away from the Ruby Princess. If a ship could flounce, this was it.

But the musical battle on the high seas wasn’t over.

The Ruby Princess, which had about 4700 passengers and crew on board, responded with again just the one note bellowed out but repeated forcefully in a staccato rhythm with plenty of bluesy attitude.

On shore people cheered and clapped, laughed and smiled. 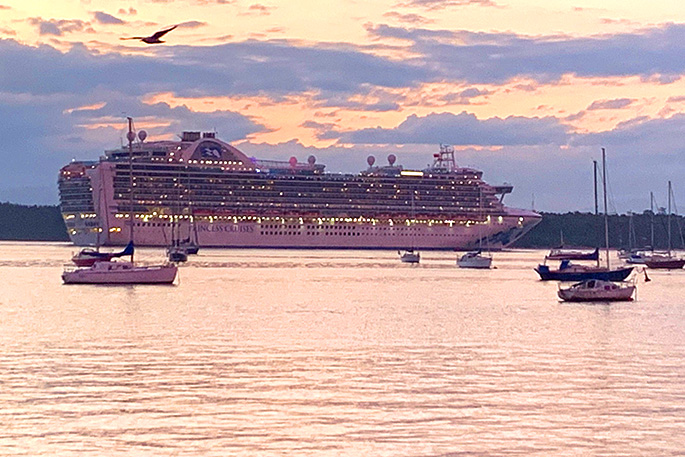 It’s a rare occurrence to have both cruise ships in port on the same day and isn’t expected to be repeated during the 2019/20 summer season, although both ships will be in port at various times with other ships. The musical Majestic Princess is in port again today, December 28 and due to leave at 9.30pm. It returns again on January 16, 2020. No doubt there will be great expectations of more ‘singing’ from this majestic vessel.

Within 30 hours, the video of the Boxing Day cruise ship musical interaction was shared over 1000 times on Facebook, with over 157,000 views as it started to go viral.

The Port Chalmers Cruise ship market wrote “Sisters hey, always trying to outdo each other. However I think the 'Majestic' may have won this round.”

Seven Seas Travel posted “How cool was this yesterday when the Majestic Princess and Ruby Princess were both in the Port of Tauranga in New Zealand and had an impressive way to bid farewell to each other. The Majestic does win hands down but her horn is one of the many spectacular things about her and brings goosebumps when you hear it the first time you’re on board.”

The Port of Tauranga is consistently voted by passengers as one of the best cruise ship destinations in New Zealand.

The duelling musical cruise ships were summed up best by Michael Carr who posted to Facebook the comment:  ‘Well that was a hoot”.