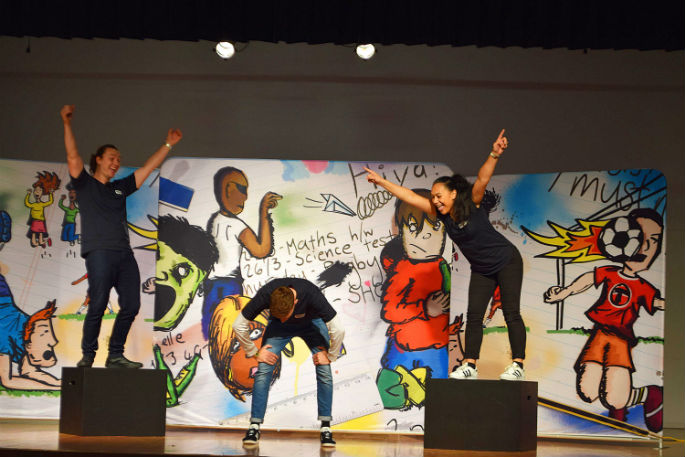 Troy Vandergoes, Kieran Milton and Carrisse Utai during a performance of Smashed Project.

Ninety one per cent of teenagers say they will wait until 18 to try alcohol after participating in Smashed Project – the internationally acclaimed theatre-based education programme aimed at equipping them with the skills they need to counter peer pressure to drink alcohol.

Smashed Project, which was established in the UK in 2005 and will this year be delivered in 21 countries worldwide, launched in May in Auckland, brought to New Zealand by responsible drinking initiative the Tomorrow Project and delivered by the Life Education Trust.

The programme – featuring a play about a group of young friends who find themselves in trouble as a result of drinking alcohol – was delivered to almost 20,500 students from 94 schools across 135 performances. The performance is followed by an interactive workshop where pupils are invited to probe the cast on issues brought up during the play and discuss the consequences of underage drinking.

Students were surveyed before and after the interactive performances and results showed that 91 per cent of students are now less likely to try alcohol before the age of 18 – after taking part in Smashed Project.

Smashed spokesperson Matt Claridge says the result is encouraging and speaks to the value of getting in front of teenagers and speaking to them in language they understand.

"Because it tells someone else’s story – not their own – it allows the students to actively rehearse situations and engage in the issues raised as a group. This includes looking at other options or choices for the characters that may lead to better outcomes.”

Other results from the surveys include:

In the UK – where more than 380,000 pupils have participated in the programme – there has been a significant drop in the number of young people drinking alcohol, from 45 per cent of 8-15-year-olds in 2003 to 14 per cent today.

A global survey of Smashed participants shows the programme, developed in collaboration with young people, has had a real impact on teenagers and their attitude and behaviour related to alcohol.

The Tomorrow Project is an alcohol industry-funded organisation, that manages the Cheers brand. It’s a social change initiative to create a healthier, safer and more responsible drinking culture in New Zealand, by utilising evidenced-based, targeted interventions that address the real reasons behind problem drinking.

It is hard to argue against drugs when we are drinking alcohol and the bad effects of it are publicly visible. The key is responsibility.