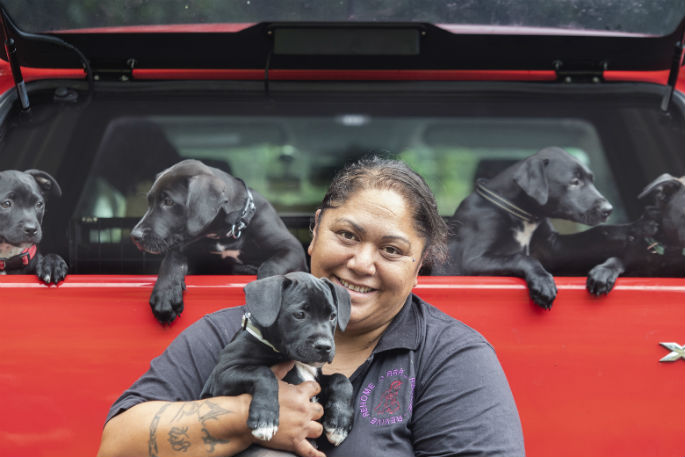 Siobhan Mikaere’s with some of RRR’s canine companions.

Don’t get just get a pet for Christmas, get a companion for life.”

That was Siobhan Mikaere’s message to people this Christmas, urging them to think before they buy.

She is one of the two driving forces behind Bay of Plenty animal rescue operation Rescue, Revive, Rehome.

The non-for-profit has made the call to not adopt out animals over the Christmas period, saying that too many will end up in the wrong hands.

“People just want a cute little animal for their kids for Christmas, without thinking about the long-term responsibility," says Siobhan.

"Over the past week, we have been turning away about thirty inquiries each day, from people who want a Christmas kitten or puppy.

Twenty-year-old Rowan Elliot, who runs RRR alongside Siobhan, says they are expecting to see a massive influx of unwanted animals after the Christmas period.

"As soon as the Christmas spirit wears off and the animals grow up, we will get people coming to us with animals they don't want anymore."

Charity founder Anna Fuller agrees with Rowan, saying in the first half of the New Year it’s common to see impounded ‘Christmas gift puppies’ who have grown into teenagers.

“By the time July comes and registrations are due, the Christmas gift pups are big teenagers.

“They are often unregistered and not microchipped, and this is when you see them surrendered to the pounds.

“The biggest number of dogs we take on are in the teenage and young adult category. Many are unruly and untrained and have various behavioural issues often relating to stress and anxiety,” she says.

RRR launched in January this year and since then they have made huge strides bringing more than 1000 animals to safety.

"We have de-sexed, vaccinated and rehomed 700 cats and kittens and more than 250 dogs and pups," says Rowan.

"We have also rehomed 150 goats and five mini-ponies."

They currently have 100 cats and kittens, 30 dogs and puppies, 33 kids, 30 mini ponies and horses in their care.

Rowan reiterates that all these animals have come from abusive situations, abandonment, or hoarder homes.

The pair somehow manage to hold down full-time jobs while running the rescue. However, they say doing both does comes at a cost.

“Running the rescue is pretty much a full-time job and we both work full time as well. I have a young family, and they suffer because of how full-on it all is,” says Siobhan.

Rowan says the same thing. “It takes a toll on us, and it drains our resources. We are so tired, but the animals don’t have a voice.

“We don’t have a choice to step up to the plate to be that voice for them, because not enough people do.”

Foster homes, volunteers and donations from the community all play a crucial role in keeping the rescue afloat.

Rescue, Revive, Rehome complete a ‘strict’ vetting process before animals are sent into foster homes or adopted out to potential owners.

When adopting animals out, they say it's their mission to find loving owners who are committed to caring for the animals long-term.

"What we don't want is to see our animals returning to us after a few weeks," says Rowan.

Siobhan speaks of a disheartening moment weeks ago, when an abused puppy died in her arms only hours after being rescued. It was then she felt like giving up.

“I picked up a puppy who was absolute bone. She had burnt whiskers, broken teeth and was seriously dehydrated. I got her home as fast as I could and gave her IV fluids but she didn’t make it through the night.

“It’s days like these, where I think am just about done. It just breaks my heart.”

Rowan says she didn’t know how severe the situation was in the Bay until they started seeing mistreated animals daily.

“There are kittens that come to us that die within hours of coming here, they have been chucked in a rubbish bin or dumped in a river in a bag,” she says.

But how do we prevent this from happening? The pair put it down education.

“We need to stop the cycle – the key is to educate children and start teaching them about how to take care of animals at a young age,” says Rowan.

People need to have an increased understanding of how much love and care animals require, says Siobhan.

"They need to be a part of the family. Too many people get a puppy, and then straight after Christmas they are outside chained up 24/7."

Lack of neutered pets in the Bay contributes to the high numbers of young animals that end up in RRR’s care. However, Siobhan says it’s an expensive procedure that many can’t afford.

“People fall on hard times and they can’t afford to desex their animals. It cost $250. That’s two weeks groceries for some families.

“We don’t judge people who can’t afford to desex their animals, it doesn’t help the situation.