‘Tis the season – for gardening and plant disease 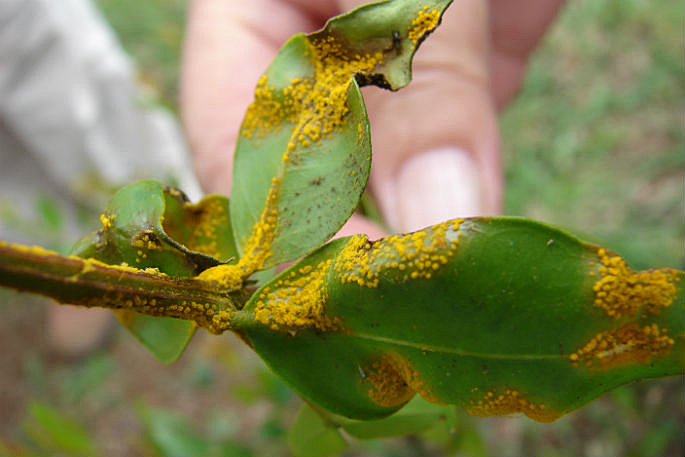 Myrtle rust poses a real threat to some native plants including pohutukawa and kanuka.

All throughout Aotearoa, offices are closing and people are winding down for the summer. For those people staying home or visiting baches this season, a popular summertime activity is gardening.

However, there is a threat to New Zealand’s native plants that may be lurking in your own garden – myrtle rust.

Myrtle rust, a disease caused by the fungus Austropuccinia psidii, is threatening myrtle plants in New Zealand, including some Christmas favourites.

Pōhutukawa, common throughout the North Island and also called the New Zealand Christmas tree, and kānuka, common in the South Island with white flowers that resemble snow, are both myrtles.

The disease first appears on myrtle plants as blotches of yellow dust on the leaves and stems. Spores are tiny and very easy to distribute by touch and even by wind. Its ability to attack many different species of myrtle plants and its ability to spread so easily means that the disease is already present in many areas of the North Island and in some parts of the South Island.

People may or may not have native myrtles in their garden, but non-native, common garden myrtles can also get infected. Non-native myrtles include eucalypts, bottlebrush, guavas and monkey apples or lilly pilly, a common hedge species. When non-natives are infected, the spore load builds up, increasing the threat to other myrtles, as the spores are easily spread by wind.

What can gardeners do to make sure their gardens are protected from disease? The Beyond Myrtle Rust Programme, in partnership with myrtlerust.org.nz, hosted by the Ministry for Primary Industries, has released a resource for gardeners to help them protect against disease or prevent its spread if the disease is present.

• Know myrtle rust: Myrtle rust forms blotches of tiny yellow spores that look like clumps of pollen. Spores can stick to clothes, shoes and fingers – so don’t touch it!

• Know your myrtles: If you’re not sure whether a plant with signs of infection is a myrtle, upload a picture of it to iNaturalist.NZ for expert confirmation, or try the iNaturalist Seek app for a fast ID.

• Do not prune myrtles over the holidays: Myrtle rust attacks new growth and is less infectious in the winter, so wait to prune to avoid growth in summer and autumn.

People can also get into the holiday spirit by giving New Zealand’s native plants a valuable gift – the removal of highly-susceptible non-native myrtles from your garden in the North Island.

It is easier to remove plants when they are still healthy, instead of removing them after they have become infected.