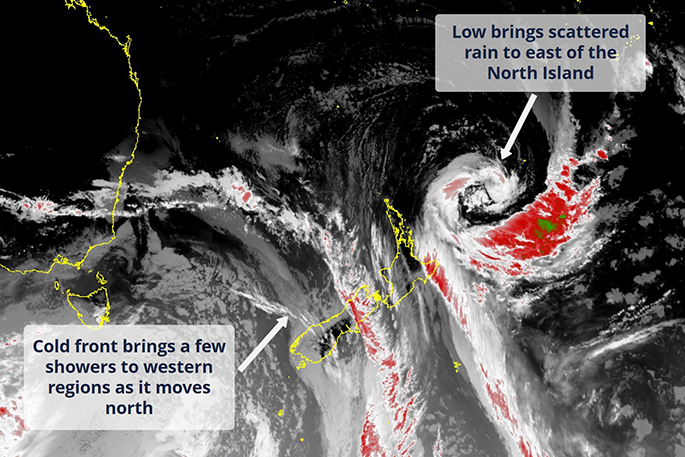 Infrared satellite image over the Tasman. Image: Courtesy of JMA

With some people wondering where summer went earlier this week, the more settled weekend weather would have come as a relief.

However, it remained relatively cool for some places, like Dunedin city whose overnight minimum temperatures were below their December average the entire week.

“It’s been an eventful end to the final working week of 2019 with a significant low-pressure system moving over the country during Tuesday and Wednesday, followed by a number of active fronts,” says MetService Meteorologist April Clark.

“This meant many regions see-sawed from warm to cold and saw a prolonged period of rain which caused the Rangitata River to burst its banks and SH6 to close for a time due to washout. Nelson was another region that experienced a wet week, recording over 120 per cent of their average December rainfall.”

Thankfully, for anyone looking to make the most of the outdoors over the Christmas holidays, a ridge of high pressure prevents any other weather features from having too much of an impact on the more settled weather we have seen this weekend.

“The lead up to Christmas is looking like a much drier affair, with a front now moving over the lower South Island weakening as it moves north, bringing only some cloud and a few showers to more northern regions,” says April.

“Meanwhile, a low to the northeast does look to try and dampen the festivities for eastern regions from Gisborne to the Wairarapa with a period of rain or showers forecast for these areas.”

Christmas Day itself is looking dry for most. A few showers are forecast over both the upper North Island and lower South Island with the possibility of those showers becoming more frequent and heavy in isolated spots.

However, even in these regions sunny spells should keep that Christmas cricket game a temptation. Keep an eye on the forecast for Christmas Day as our meteorologists start pinning down some of the details.