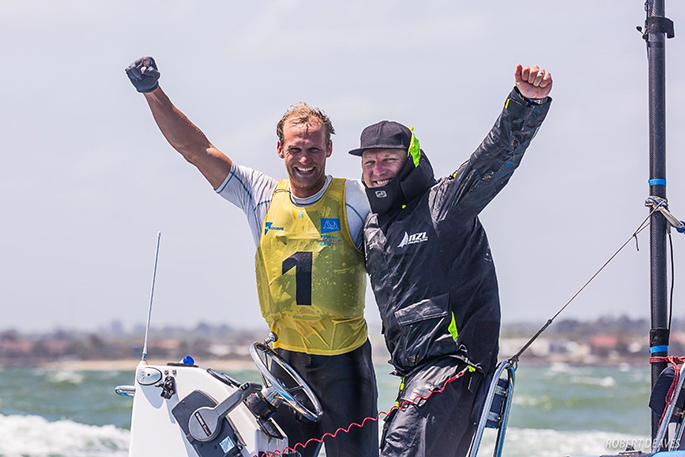 For a brief moment Josh Junior thought he was in trouble during yesterday's medal race but he did what he had done all week - sailed fast - to become the first New Zealander to win the Finn Gold Cup world championship.

It was a tremendous result for the 29-year-old - he turns 30 today - and Andy Maloney was also sixth overall to cap off a brilliant regatta for the close friends and training partners.

Josh took a handy 16-point lead over Nicholas Heiner into the medal race which gave him a good buffer but he was a little nervous as the Dutchman led halfway through and as Junior trailed near the back of the field.

Josh recovered on the second beat in the 20-knot winds and big waves on Melbourne's Port Phillip Bay and Nicholas also slipped a couple of places which eased Junior's nerves. Nicholas eventually crossed in third, with Josh seventh and Andy ninth.

"I had a big lead but, to be fair, Heiner did a really good job at the start and on the first beat and he sort of got away on me," says Josh. "I was a bit worried I was in trouble of losing the whole regatta but I managed to hold it together and get the result I needed and I'm absolutely over the moon.

"It's bloody awesome. I have never won a world championships or even a [world championships] medal so I'm stoked. There have been a lot of successful sailors in the Finn for New Zealand in the past and to be one of those is a great honour."

None, though, have ever won the Finn Gold Cup. Jonty Farmer (bronze 1975 and silver 1976) and Dan Slater (silver 2008) are the only Kiwis to stand on the podium since the first event in 1956. Junior was fourth at last year's world championships.

It caps off an outstanding year for both Josh and Andy and their tactic of working closely together is clearly paying off. Andy won both the Princess Sofia Regatta and World Cup Series Final and was second at the Finn European championships and Josh was second at the World Cup Series Final and third at the Princesss Sofia Regatta.

"It was epic to see JJ win the Gold Cup and become the first Kiwi ever to do it," says Andy. "I'm so stoked for him. We have made great gains recently and he sailed awesomely well this week."

Josh was the most consistent sailor in the 60-boat fleet, posting only one score outside the top eight, and it left him in the driver's seat heading into the last few races.

"It's been a bloody outstanding week," he said. "I seem to have put pretty consistent results together and that's seen me near the front and took a bit of pressure off. But it's certainly a bit nerve racking. I have never been leading a world championships before, especially for so many days. I certainly felt the pressure but just bloody stoked to come away with it, really.

"Obviously Andy and I are really good mates and really good training partners and I was a bit gutted to see him not get on the podium today. But I think he still ended up with a good result. We will have another few regattas and, whoever ends up doing the best out of us will go to the Games and hopefully win a gold medal there.

"We just have to keep chipping away, keep getting better and hopefully that leaves us near the top of the fleet come Tokyo 2020."

As soon as Josh crossed the finish line he capsized his boat in celebration and then sought out coach Andrew Murdoch.

The nerves had well and truly disappeared by then.

Results and standings after day 6 of the Finn Gold Cup at the Royal Brighton Yacht Club in Melbourne today: